There are Muslims and then there are Moslems.  The former believe in the pre-Hijra teachings of Muhammad, while the latter believe in his post-Hijra teachings.  Attempting to separate one from the other is like separating the resurrected Christ from Jesus.  The Protestant Reformation of Christianity in the 16th century was to break away from the Catholic Church and return to the teachings of Christ.  Jihadis today are the reformers striving to return Islam to its roots.

In a Kelly File Special on May 25, 2015, FOX News’ Megyn Kelly presented a report on the religion of the Prophet of Islam titled, “Defying the Sword.”  Her guests included a number of “moderate” Muslims who declared that “radical” Islam must be “reformed.”  Both Christianity and Islam have basic tenets of their founders to which all who believe in Jesus and Muhammad are directed to adhere.  They are known as the Great Commission of the Savior and the Commands of the Prophet and they are complete opposites:

Jesus – “Tell others about Me.”

Although history is filled with the deeds of wicked men doing evil deeds in the name of Good, the teachings of Jesus and Muhammad are as immutable as they are well-documented.  To separate their teachings from their deeds or vice versa is to render them false.  Without them the two are nothing more than men who preached a philosophy followed by fools in believe in fantasy, which happens to be the viewpoint of atheists who believe there is no Creator.

Who would Jesus kill?

The answer is – no one.  Christ’s Word was a message of righteousness; loving God, loving your neighborhood, and doing unto others as you would have them do unto you.  That later leaders in the Christian church militarized to combat violent pagan religions has been debated to this day whether engaging in Just War is right or wrong.  On the one hand, Jesus said to do no more than tell others about Him.  On the other, He did not say to let evil people rule.

Allowing anti-Christian paganism, like the Germanic religions that advocated for their followers to loot, rape, and pillage their neighbors, to conquer and corrupt their children is absolutely abhorrent to righteous people.  At the same time, conquering and forcing them to convert is as much contrary to the teachings of Christ as they are the foundation of the pagans.  After Islam raged out of Arabia in the 7th century, the Catholic Church adopted their totalitarianism that would lead to the Great Schism and, centuries later still, the Protestant Reformation in which Christians overthrew the power of the Church to reassert the Christianity of Jesus.

“You have heard that it was said, ‘You shall love your neighbor and hate your enemy.’  But I say to you, love your enemies and pray for those who persecute you,” – Matthew 5:43-44

Who would Muhammad kill?

The Jihad, by comparison, comes in two forms.  One is the Greater Jihad that Muhammad taught to the first Muslims in Mecca.  The other is the Lesser Jihad that became the foundation of Muhammad’s teachings after he was ejected from Mecca for demanding tribal leaders make him the spiritual leader.  The Greater Jihad is an inner struggle to overcome evil within oneself and was taught by Muhammad to his infant Islamic movement to promote monotheism to worship Allah.

After luring many followers with his message of peace then being rejected by Meccan leaders, the message of Muhammad changed.  The Lesser Jihad is that which unleashed a horde of fanatics on the world in a rage of conquest, looting, raping, and pillaging its way into Africa, Asia, and Europe.  This came about after Muhammad was driven from Mecca by the tribal leaders who rejected his demand to be recognized as their Spiritual Leader.  Muhammad moved to Medina and turned his followers to waging war on Mecca, raiding caravans to loot and pillage, until he eventually attracted a large enough band of followers to conquer the richest city in the Arabian Peninsula.

Before he died he sent emissaries to neighboring countries demanding their obeisance and, after his death, his followers invaded them.  The conquered were made to convert to Islam, pay an addition tax called the Jizya and given status as dhimmi, 2nd class citizens, leave with only their lives, or be killed.  Through the centuries many were slaughtered who fought Islam, enslaved, and oppressed.  The harem’s of Shah’s consisted of Christian women taken as sex slaves, and the children of other Christian slaves were taken to be raised as Moslems, the Turks going so far as to make them viciously fanatic warriors known as the Janissaries.

Qur’an:8:39 “So fight them until there is no more Fitnah (disbelief [non-Muslims]) and all submit to the religion of Allah alone (in the whole world).”

Qur’an:9:5 – “Fight and kill the disbelievers wherever you find them, take them captive, harass them, lie in wait and ambush them using every stratagem of war.”

Qur’an:9:29 “Fight those who do not believe until they all surrender, paying the protective tax in submission.” 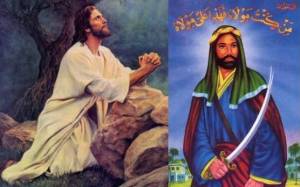 Both Christians and Moslems promise that the reward of the faithful in the Afterlife will be great.  But what they promise are opposites of each other:

Heaven – Christ told his followers that Heaven promises to reward those who live a righteous life following the Commandments of Christ, to love God with all your strength, all your heart, and all your soul, and to love others as you love yourself, will live in tranquility with those they love in peace and harmony, and that the most faithful will see the Face of God.

Paradise – Muhammad told his followers that Paradise promises to reward those who die killing the infidel with virgins untouched by other men to satisfy their most ardent sexual desires, both girls and boys who will serve them in any way they wish, and they will live as Sheiks with their harem of houris and servant boys gratifying their carnal lust.

People today know little of the Jihad.  They know nothing of the millennium of war, invasion, conquest, slavery, and oppression by Islam until it was crushed outside the gates of Vienna in 1623.  Since then, western technology has made fanaticism in war suicide… until now.

Still, atheists would like to reform Christianity so they do not believe in “a fairy tale God,” and that Jesus raised Himself from the dead to forgive their “guilt induced sins,” to promise them an existence in a fantasy land after they are dead.  Not too many Christians who have accepted Christ as their Savior will be willing to give up their faith on the word of atheists who know as much of the universe as anyone else.  When it comes down to believing in God or believing in man, Christians put little faith in men.  Muhammad, on the other hand, demanded all faith be put in him, contrary to Jesus who only asked.

Marx, Stalin, Hitler, and Mao showed the world how small tyrants can seize power through propaganda, terrorism, guerrilla warfare, and political radicalism.  Their formula is the same formula that Muhammad used in converting people to Islam, indoctrinating them into the ideology, and then leading them in Jihad.  Those calling for the reform of Islam are the same as others calling for the reform of Communism, Nazism, and totalitarianism.

Haroon Moghul says – “She says Islam needs a reformation to stop extremism.  But Islam already had a reformation and it’s the reason we have extremism.”  He argues that her solution to this problem is the cause of the problem.  Both of these arguments completely ignore the fact that what modern westerners view as radical extremism are actually the fundamental teachings of Muhammad.

The only reasonable conclusion to be drawn from this is that those who truly want to reform Islam, to remake it from a religion that promotes the evil Muhammad taught in Medina to one that promotes righteousness as Muhammad did in Mecca, then they should become Christians.  You cannot force a leopard to change its spots or a scorpion to change its nature.  Islam is the religion of Muhammad that cannot be divorced from its Prophet who proved to be false.

Jobs for Jihadis – the pinnacle of galactic stupidity

Why are there no Muslims in Star Trek?

The Final Solution to Islamic terrorism

The message for America in black and white

This site is my opinion only and is unpaid. I am a retired Paramedic/Firefighter with 25 years of service in the City of Dallas Fire Dept. I have a B.A. degree in Journalism, and A.A. degrees in Military Science and History. I have spent my life studying military history, world history, American history, science, current events, and politics making me a qualified PhD, Senior Fellow of the Limbaugh Institute, and tenured Professor for Advanced Conservative Studies. 😄 It is my hope that readers can gain some knowledge and wisdom from my articles.
View all posts by dustyk103 →
This entry was posted in Fundamentals, Islamism, Religion and tagged Christ the Savior, Christian reform, Christianity, Islam, Islamic reform, Jesus Christ, Muhammad, Prophet Mohammad, Religion, Religious reform. Bookmark the permalink.