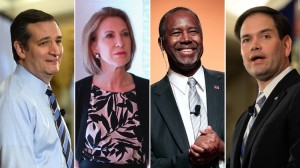 The big winners of the 1st GOP debate; Cruz doubles his poll numbers while Fiorina quadruples her own.  The next four candidates chasing Trump are two senator and two professionals.

Rand Paul taking on Trump and Christie was a mistake.  Doing a Rick Perry from behind didn’t help his case.  Trying to chastise Christie for hugging Obama just set the governor up to spin a tale to praise himself.  Paul shouldn’t have slammed him for the bro hug, but slammed him for endorsing Obama as a good president who “very presidential” rather than for the thug shaking him down for an endorsement that he was!

Trump, on the other hand, is still an enigma who may be a Clinton shill as Paul alluded, and may try to do a Mitt Romney by sabotaging his opponents with whatever dirt he can find.  But he’s in for a hard time trying to torpedo people like Rubio, Cruz, Fiorina, and Walker. Carly certainly has his number when she called him out for his past liberalism and support of Democrats.  It would be good to see the five of them on the same stage.

Fiorina and Cruz were the big winners of the night with him doubling his poll numbers and her quadrupling her own.  Trump may be the third biggest winner gaining rather than losing poll numbers as the media expected.  To be fair, FOX’s questions for Trump, and for all the candidates, have come under attack for their quality.  But those are the kinds of questions the liberal media will be throwing at them, so throwing them softballs about their policies may have been a waste.

If they do another debate they should pare it down to the top 8 and, if they want a lower tier debate, those at the bottom should be dropped entirely.  Of the candidates, a mix of CEOs, governors, and senators, the mix looks like this:

The top two of each category of candidates are;

To be sure, the main reason Trump and Bush are at the top of the polls is purely from name recognition.  Fiorina was virtually unknown and has now exploded onto the scene the way Dr. Carson did after he confronted Obama at the National Prayer Breakfast.  More people will be paying attention to her now, and she has much to say with which conservatives agree.  And listening to Sen. Cruz speak was an eye-opener for most as he has been so demonized in liberal media that few know what a staunch, anti-Establishment, pro-taxpayer conservative he truly is, which is certain to chafe some liberal hides.

Some complain of Trump’s arrogance, vulgarity, and narcissism.  What do they care compared to what we have now?  Obama is the first and only president to speak vulgarly to the people saying, “The police acted stupidly,” and called TEA Party members, “tea-baggers,” his comment having been pulled down from YouTube under duress.  Obama is the most arrogant, vulgar narcissist ever to be president.  How could Trump be any worse?

The chief fear on everyone’s mind, at least on conservative’s minds, is that 2016 become a 1992 rerun nightmare with Bush vs. Clinton vs. Trump.  Trump may well be in the race to play Perot for Hillary and get her elected the same way her husband became president.  Were it not for Perot, no Democrat would have lived inside the White House for almost thirty years.

Of most interest is that of the top candidates, one senator is #2, three professionals fill the rest of the top four, the top five are all rising, and the first governor is #6 and falling.  While executive experience is always best for the office of president, there is now no doubt that Rubio and Cruz have executive experience in their past, unlike Obama who had no experience besides being a political agitator.  The next few weeks will be very interesting.

P.S.  A Trump/Cruz ticket may be just what some people want as both men tell it like it is, but if Trump is actually a shill then honest Ted is the last person who would ask to be his VP.

As an aside, how about the next debate, rather than asking the candidates liberal attack questions, we get some views on actual issues?

First debate separates the Republican wheat from the chaff

Help wanted: President of the United States, no experience necessary

This site is my opinion only and is unpaid. I am a retired Paramedic/Firefighter with 25 years of service in the City of Dallas Fire Dept. I have a B.A. degree in Journalism, and A.A. degrees in Military Science and History. I have spent my life studying military history, world history, American history, science, current events, and politics making me a qualified PhD, Senior Fellow of the Limbaugh Institute, and tenured Professor for Advanced Conservative Studies. 😄 It is my hope that readers can gain some knowledge and wisdom from my articles.
View all posts by dustyk103 →
This entry was posted in Election 2016 and tagged 1st GOP debate, Ben Carson, Carly Fiorina, Donald Trump, Elections 2016, GOP polls, Jeb Bush, Marco Rubio, Mike Huckabee, Presidential candidate polls, Republican polls, Republican presidential candidate, Scott Walker, Ted Cruz. Bookmark the permalink.