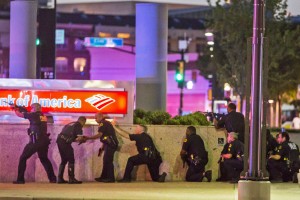 Once again a Blacklivesmatter “peaceful protest” becomes a violent criminal event, only this time it became a full-fledged terrorist attack to murder cops.  The criminals of BLM ambushed and murdered five Dallas police officers and wounded six more.  Media who call this an “execution” rather than assassinations and murder are smearing police as if they were the criminals.  There were four shooters armed with rifles, body armor, and bombs, and the one suspect with whom police spoke before killing him said he wanted to kill white people.

The two blacks killed by police that were broadcast over the Internet were both cases where the perps were disobeying or actively fighting with police and in possession of guns.  One was a man who was acting violently and when police took him down he fought them and tried to take a gun from his pocket causing them to shoot him.  While one cell phone video could not see the gun, another could see the perp’s arm free and reaching for the gun making this clearly a justified shooting.

The second was a man who said he had a concealed weapon license and reached down into where he had his gun and was shot when told to stop.  His girlfriend sitting in the car beside him turned on her cell phone camera and said the officer told him to get his ID out and he was only obeying.  While this shooting is more obscure it is a case of the officer’s word against the woman’s and more information is required.

This is the problem with the court of public opinion which makes judgements based on insufficient information as has been done in every single case that Democrats are using to damn police officers.  Liberal media has even gone to pains in making matters worse by deliberately doctoring audio and video to make those, like George Zimmerman who killed in self-defense, look guilty.  This is because the leftist media is corrupt and assisting Democrats and perpetrating a lie.  Liberals lack a moral compass to understand the difference between murder and killing in self-defense.

Media constantly calls these shootings of police “executions.”  STOP IT!  Criminals are executed for their crimes.  These officers were assassinated, murdered by BLM terrorists on a jihad against those who uphold the law.  This all stinks of Islam, which is the fastest growing religion amongst blacks.  Muhammad taught his followers in Jihad that they are justified in killing innocents in retaliation for perceived wrongs by others who are associated with them.  Homicide is justified in Muhammad’s world and people are guilty by association.

Democrats have been encouraging and allowing these criminals to go on rampages for two years now.  It’s time Americans put a stop to this, put down these criminals, and shut down these so-called “peaceful protests” that so often erupted in violence.  Democrats say it’s racist to point out that blacks commit 10 times more violent crime than any other demographic group.  Law-abiding Americans need to stand up and crush this Democrat propaganda slandering the good people of this great nation.

[Author’s note: America has had eight years of the black Moslem in the White House advocating for Islam, black criminals, and illegals to overthrow white people in America.  Two-faced, hypocritical Democrats quote Christian love that “Darkness cannot banish darkness, hate cannot drive out hate,” but it is they who are provoking this hate.  When Democrat leadership incites their followers to hate and murder and then preach love and peace it is an assault on the soul of this nation.

The shooting of the CHL holder was a direct result of blacks assassinating police and police becoming increasingly fearful of attack.  Blacks are dying in droves in inner cities because police have pulled back and no one is complaining about that!  This is the kind of Democrat racism teaching blacks to hate whites that has corrupted the soul of America.  And, of course, expect Democrats to call for the disarmament of white people.

What does it take for the people of this nation to stop bowing to the phony guilt trip of Democrats who smear this great nation and slander white people?  What does it take to stop these fools from baring American’s throats to commit suicide and fight back against the real evil in the world?  When will the righteous Americans stand up strike down these Democrats who are murdering those who been charged with protecting us?]

STOP CALLING THE MURDER OF COPS AN EXECUTION!

Patriots vs. America haters – the war on taxpayers, police, and patriots

This site is my opinion only and is unpaid. I am a retired Paramedic/Firefighter with 25 years of service in the City of Dallas Fire Dept. I have a B.A. degree in Journalism, and A.A. degrees in Military Science and History. I have spent my life studying military history, world history, American history, science, current events, and politics making me a qualified PhD, Senior Fellow of the Limbaugh Institute, and tenured Professor for Advanced Conservative Studies. 😄 It is my hope that readers can gain some knowledge and wisdom from my articles.
View all posts by dustyk103 →
This entry was posted in Election 2016, Racism and tagged #blacklivesmatter, Black lives matter, Black protests, BLM Jihad, BLM shootings, Criminals vs. Police, Dallas cops murdered. Bookmark the permalink.