STOP calling the killing of NYPD cops an EXECUTION!  It was MURDER! 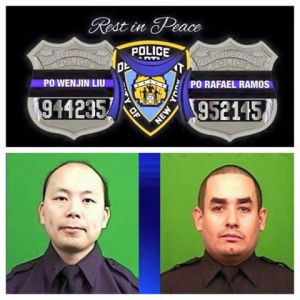 An execution is killing someone guilty of a heinous crime and calling it this is implying they were corrupt cops.  These policemen were two good men guilty of nothing except wanting to protect the innocent from the savage.  It wasn’t “execution style,” which is forcing someone to their knees and shooting them in the back of the head.  They were ambushed, assassinated as they sat in their car.

While only 2% of cops are corrupt, 100% of criminals are corrupt and it is they who are calling for more dead cops.  Barack Obama, Eric Holder, Al Sharpton, and New York’s newly elected Democrat Mayor De Blasio are all guilty of inflaming the hatred of racists amongst blacks, of inciting criminals, rioters, looters, and murderers to attack white people and those of other races.  The blood of many innocent people is on their hands.  The two policemen murdered were of Asian and Hispanic descent, but that makes no difference to the racists that lead this uprising.  Liberals are cheering the assassination of these two good men saying things on Twitter like “only pirates (thieves, rapists, and murderers) are truly free.”

That the perpetrator was a Moslem is no surprise as Mohammad teaches in both the Koran and Hadith that killing the innocent in revenge for the actions of one of theirs is righteous.  That he was a black man who just shot his ex-girlfriend is equally no surprise.  And that Al Sharpton blamed white people for the actions of this murderer also is not unexpected.

America is in a race war that is heating up and it starts at the top.  The job of the President of the United States is to act for the benefit of all Americans who are law-abiding, but Obama and his top cop, Holder, are more bent on inciting violence against white people while persecuting police.  Rather than hold criminals responsible for their actions as the Grand Juries of Ferguson and New York did, they blame the white, Hispanic, and Asian police that the criminals attacked. 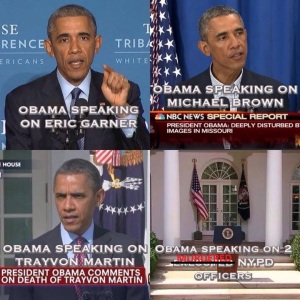 America’s police are not Iran’s police who oppress good citizens.  They protect the good citizens from the savage criminals that grow in any society and flourish in today’s American culture.  Democrats blaming police as the cause for the violence in the black communities would have crackheads be the caretakers of the good people who want to be protected from the criminals.  While no corner of society is corruption free, police deserve every respect of good citizens and the voting down of those who condemn them as violators of “criminal’s rights.” 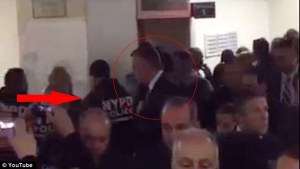 Militarizing police as part of the Democrat agenda

Liberals condemn black pastor for speaking out against Ferguson riots

Survey – What is your American Dream?

This site is my opinion only and is unpaid. I am a retired Paramedic/Firefighter with 25 years of service in the City of Dallas Fire Dept. I have a B.A. degree in Journalism, and A.A. degrees in Military Science and History. I have spent my life studying military history, world history, American history, science, current events, and politics making me a qualified PhD, Senior Fellow of the Limbaugh Institute, and tenured Professor for Advanced Conservative Studies. 😄 It is my hope that readers can gain some knowledge and wisdom from my articles.
View all posts by dustyk103 →
This entry was posted in Conservatism vs. Liberalism, Obama's legacy, Racism and tagged Al Sharpton, Anti-police protests, Barack Obama, Dead cops, Democrats, Eric Holder, Ferguson riots, Mayor De Blasio, NYPD cops shot, NYPD Murdered. Bookmark the permalink.