FBI did not exonerate Hillary – Comey excoriated and then excused her 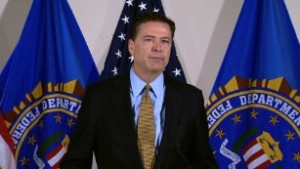 Director Comey has been lauded by Republicans as an honorable man.  But his actions in excusing Hillary after laying out her many violations brought honor to no one.  When he said, ‘anyone else doing this would be prosecuted,’ he revealed the truth of Democrat corruption.

According to the FBI Director Comey’s final analysis, Hillary Clinton lied about everything she said regarding her illegal email server.  She broke the law and installing a private server unregulated in accordance with her government station as Secretary of State.  She broke the law by using it for classified data she received and was clearly marked.  And she broke the law by wiping the server to deny investigators access to email proving the crimes she was committing.

Now she wants to talk about Donald Trump’s taxes and casino that he used to make money.  Only fools don’t know that casinos are designed to make money – the odds are all on the house.  Just like they did with Romney, Democrats will smear Republicans for what they do right, while the media covers up how Democrats violate the law as Hillary does with Clinton Foundation, which is nothing more than a crime family syndicate money laundering brokerage.

Obama and Hillary lie about everything they do and Democrats applaud them for it.  They say they could get no help to Benghazi in eight hours when American airfields in Italy were half an hour away by fighter jet and just two hours for a C-130 Spectre gunship, not to mention nearby ships and armed drones.  The Democrat economy we’ve been living in for the past eight years they blame on Republicans because their vacuous supporters believe what they say and pay no attention to what they do.

Donald Trump should not release his taxes any more than he should talk about his casino.  Let Hillary release the Clinton Foundation records where we already know she has been brokering her influence in Washington to foreign investors.  Democrats are turning over America to foreigners, illegal immigrants, and Islamist insurgents.  The juncture for America today is to continue having Democrats manage America’s decline through the Obama Doctrine, or take a chance on electing one of America’s greatest and most successful businessmen who may just turn back the tide of Democrat and Republican corruption.  Hillary is a product of Washington, but Trump is a product of the people’s voice protesting against Washington corruption.

[Author’s note: Democrats were in damage control mode today beating on Comey and Republicans as creating a security breach where there was none.  Dir. Comey testified that “there is no evidence that Clinton’s servers were hacked,” but how would anyone know since she wiped them before they were examined?  Everyone knows that emails are always out there even if deleted from your account and the only way to destroy them completely is by wiping them from the server that sent them.  They can be backtracked from the receiver, but that’s only if you know to whom they were sent.  Those sent to other government agencies were recovered, but those that Hillary sent to foreigners will certainly never be reported to the FBI.] 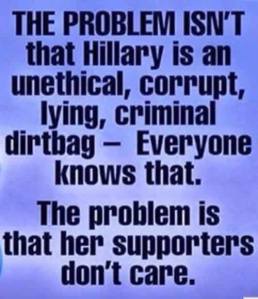 Hillary skates – convicted by rule of law but not charged

Fauxcahontas and Hillary’s havoc and lies

Islamists coming into the West are not immigrants, but an insurgency

This site is my opinion only and is unpaid. I am a retired Paramedic/Firefighter with 25 years of service in the City of Dallas Fire Dept. I have a B.A. degree in Journalism, and A.A. degrees in Military Science and History. I have spent my life studying military history, world history, American history, science, current events, and politics making me a qualified PhD, Senior Fellow of the Limbaugh Institute, and tenured Professor for Advanced Conservative Studies. 😄 It is my hope that readers can gain some knowledge and wisdom from my articles.
View all posts by dustyk103 →
This entry was posted in Election 2016 and tagged 2016 Presidential Campaign, Clinton FBI investigation, FBI exonerates Hillary, Hillary Clinton, Hillary email scandal. Bookmark the permalink.