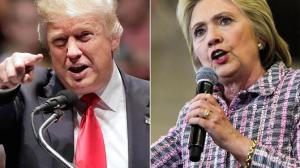 This is where liberals go to die in the dystopian world of Democrats.  The billionaire entrepreneur vs. the crony old crone.  Democrats have successfully blamed Republicans as doing what Democrats are actually doing – making the rich richer and the poor poorer.

The woman who assisted Barack Obama in unleashing the Jihad on the Middle East and expanding Islamic terrorism throughout the world said that putting Trump’s finger on the button is insanity.  Now she lauds Fauxcahantas, the women who doesn’t know from where people get money to pay taxes as being an economic guru next to a man who built a billion dollar empire.  Hillary and Obama have put more Americans out of work the last eight years, destroyed more income, increased more taxes, and borrowed more money to give to rich bankers on Wall Street than ALL Democrat thieves in history!

Democrats are actually committing the crimes that they constantly accuse Republicans of doing.  Under Obama the Middle Class has shrunk for the first time in history as he manages America’s decline.  Incomes are down, employment is down, and while Obama lauds his economy Hillary trashes it and liberals applaud them both!  It’s psychotic!

As Obama has destroyed the coal mining industry putting tens of thousands of miners out of work, Hillary says their socialist ideology is what creates jobs.  As Democrats steal from the Middle Class to give to Wall Street trillions of dollars already stolen from our grandchildren, they tell those children to vote for Democrats to save the world!  America’s children have been corrupted by the liberal education system that teaches them socialism and Islam are the good ideologies of the world and they will help them to live better lives!  Tell that to the millions of empty-headed millennials who still live at home stroking their college diplomas!

Everything Hillary said was a slap in the face to anyone with a functioning brain.  Democrats blast Republicans as destroying jobs while bringing in tens of thousands of illegal immigrants to take what few jobs there are to be had!  For decades Democrats have made themselves out to be “for the little guy” and against the big bankers on Wall Street claiming “Republicans make the rich richer and the poor poorer.”  The 2010s have been Democrats in your face doing exactly what they say Republicans do, while at the same time rewriting the history of the 80s and 90s when Republicans got the helm and made the country’s economy boom!

Trump throws down on Democrat PC

Democrats and their GOP allies will be the death of America

This site is my opinion only and is unpaid. I am a retired Paramedic/Firefighter with 25 years of service in the City of Dallas Fire Dept. I have a B.A. degree in Journalism, and A.A. degrees in Military Science and History. I have spent my life studying military history, world history, American history, science, current events, and politics making me a qualified PhD, Senior Fellow of the Limbaugh Institute, and tenured Professor for Advanced Conservative Studies. 😄 It is my hope that readers can gain some knowledge and wisdom from my articles.
View all posts by dustyk103 →
This entry was posted in Election 2016 and tagged 2016 Presidential Campaign, America in decline, American economy, Democrat economy, Democrats, Donald Trump, Economy, Elections 2016, Foreign policy, Hillary Clinton, Hillary's economic speech, Republicans. Bookmark the permalink.