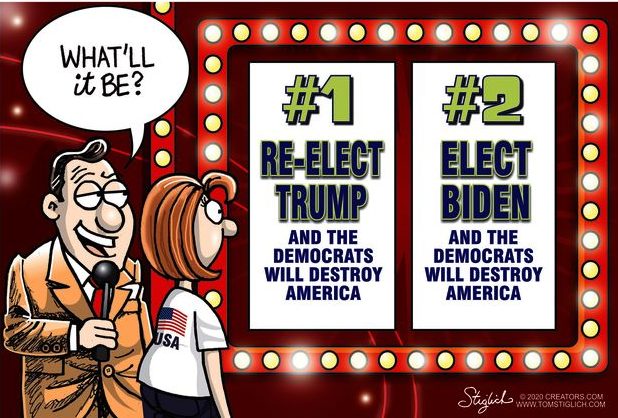 False Hope and Dark Light vs. Truth, Justice, and the American Way

During their convention, not a single Democrat mentioned the violence that has been rocking their cities for three months. President Trump made their radical thugs one of the pillars of his campaign declaring that you will not be safe in Joe Biden’s America under the rule of socialists. In response, Joe Biden tweeted out that the violence is Trump’s fault. The Democrat and Republican conventions are a study in duplicity vs. truth, hate vs. patriotism, and fascist communism vs. Christian Americanism. To Democrats, America is an evil nation that must be unmade and remade in their image as a socialist Utopia, where white people are portrayed as systemically racist to be oppressed, while brown people rule under their white Democrat elites. To Republicans, America is a great nation that shines the light of Christian love on the world leading all nations in freedom and prosperity. Raving Democrat loon, Jamele Hill, says the USA is as Nazi Germany committing genocides to conquer good people. The answer to that lunacy is that it isn’t – yet. 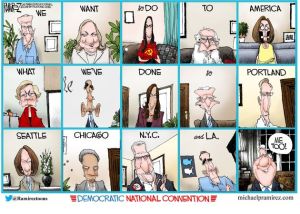 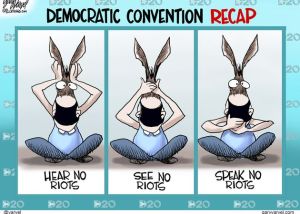 The right lives by prayer while the left rules by force. The Nazis and communists were not opposite ends of the political spectrum. They are the same. The only difference in WWII was that they were different countries competing for power. They began the war as allies but, like all leftists do, they eventually turned on their own. One side was Aryans and the other side Slavs. The same is true in America today as the Democrat’s KKK and BLM have turned on each other because one side is white and the other black. Hitler hated Jews because Jesus is a Jew. Atheists embrace Islamists because both want to destroy Christians. The conventions prove yet again that the left cannot tell the truth but must smear the righteous with their lies that they are the evil. Their media portrays Democrat’s damning America as patriotism and the Republican’s patriotism as darkness. What does it take to open people’s eyes to reality?

If Democrats can seize absolute power, then yes, America will become Nazi Germany. They tried with Obama ruling from the White House and putting Hillary in after he choked down America relying on her to finish crushing it. But the Founder’s wisdom prevailed and the people’s will rejected the left. The war between Democrats and Republicans is the same war that has been being fought throughout the history of this country. Schools miseducate that the right and left are both doing what is good for the country. The political situation in America today proves that the right believes in freedom while the left believes in servitude. Biden Democrats have presented no plan to boom the American economy but to milk it for every cent while they shut it down again. Democrats who say Trump has presented no plan function with their heads so far up their asses that they can’t see, hear, or smell anything more than the sh*t that fills their heads. What did Democrats say they would do about competition with China? What did they say about their rioters? Think about it. I’ll wait. Get back to me when you have an answer that isn’t batsh*t stupid. 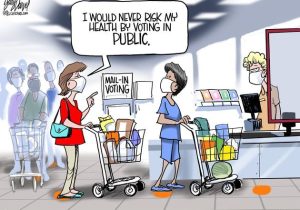 Speaking about Nicholas Sandmann, who was viciously smeared by the entire leftwing media complex in an attempt to destroy him for being a pro-life Christian, one who refused to bow down to leftist hate, and who has brought some of that media to justice in a slander suit, CNN’s Don Lemon said;

This is a rare admission of absolute truth by a pathological leftist. Liberals are triggered by the MAGA cap because they have been conditioned by leftwing propagandists who have corrupted people’s minds to believe that it represents racist white supremacy. There is no foundation for this lie. There are only leftist’s smears that Republicans are the KKK to divert the ignorant from the truth of the Democratic National-Socialist Communist Party. The victims of racism in America today are white people. All white people who do not submit to leftist rule are declared racists. Those who are rioting against white people are not fighting for justice. What justice is there in committing crimes against innocent people they don’t even know? This is leftist ideology that justifies revenge against the guiltless as righteous in the warped morality of their twisted minds.

“Many of the ideas we fought for, that just a few years ago were considered radical, are now mainstream.” – Bernie Sanders, avowed communist

Democrat thugs rampaging in their city’s streets is what America gets for electing Democrats for decades who are empowered by the Moslem communist they elected to be leader of the free world. During his terms, Obama concealed what he did by saying he was saving America after Democrats nuked the economy. He repeatedly claimed to be saving millions of jobs while crushing American energy through his shut down of coal mining and oil drilling. President Trump not only reversed this but fulfilled every promise to undo Obamunism and unleash America prosperity. He has brought back manufacturing that Obama/Biden shipped out to China. And by their measure, he can rightfully say that he has saved millions of lives by his shutting down his booming economy due to Covid. Democrats who deny this are admitting that this plague is a manufactured crisis that Democrats made worse by killing nursing home patients and denying people lifesaving medicines. 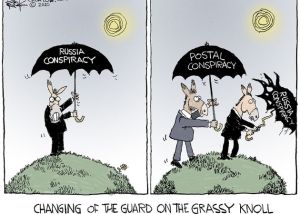 Liberals who say that the Democrat Convention was full of promises while the Republican Convention was dark and divisive are just parroting the leftwing media that tells them what to think. The Democrat Convention was empty rhetoric and rainbow oratory while Trump displayed real Americans rising in glory. The oblivious liberals did not watch the convention or listen to what was said for themselves but repeat what they are told to think by network propagandists. These are the lemmings that cannot be permitted to rule this nation lest they run it off a cliff.

This is the year that Democratic National-Socialist Communists will play the ace up their sleeve to take the whole pot and steal from the people of the greatest nation on Earth. This is the year that greedy socialists steal the American Dream to enrich themselves and all their criminals by enslaving the American taxpayer. What will President Trump do to stop this coup, this rebellion, this subterfuge, this insurrection, this sabotage of righteousness? He has fought courageously without fear to confront the Democrat swamp rats that infest Washington that have beaten on him viciously. He is up against the monster of leftist tyranny. This may be the last round in this fight. To paraphrase the awesome speech made by Henry Winkler in the great inspirational movie, “Here Comes the Boom” –

President Trump, you say that we, the American people, are your heroes. Well, you’re ours!

[Author’s Note: Democrat thugs are saying they won’t be peaceful anymore because of unjust shootings by white police of unarmed black men. Who the f*** do these gaslighting ass wipes think they are fooling? 99% of those killings are justified, but leftists won’t wait for the facts to come out before jumping to conclusions. Police shootings happen because of the extreme constant violence of leftists. Leftists are the violent criminals who tell their victims who try to defend themselves that it’s their fault that leftists murder them. This is the evil mentality of leftism and it must be crushed lest it enslave us all. Democrats keep saying they support these “peaceful protesters” standing with them against police. They say that shooting lasers and fireworks in the faces of police is acceptable behavior. Let’s shoot them and their rioters in their faces with lasers and fireworks!

These violent insurgents and their Democrat leaders need to be brought to justice! Why are they being permitted to continue to act as mayors and governors when they have risen up in rebellion against law and order? They have assassinated and maimed law enforcement officers. They terrorize people, and their governors have murdered tens of thousands through their Covid response. They should all be shot on sight during riots for using deadly force against police. Officers should be issued clubs to beat down and crack skulls of those who shout and spit in their faces or do the same to citizens. This is assault and battery and leftist Democrat mayors are applauding this rather than prosecuting it. And their leaders must be removed from office, forcibly retired, charged with their insurrection, convicted of treason, and hanged.]

President Trump lays out his plans vs. Biden’s plan to shut down the nation again while raising taxes 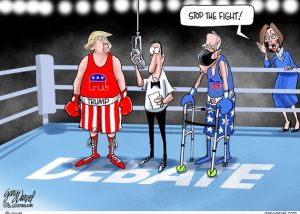 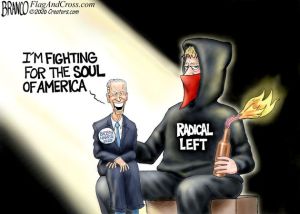 BLM invades suburban zones to terrorize white people shouting, “Give us your homes!”

Nazis learned from Americans alright – from the “progressive” Democrats

Democrats Give “Going Postal” a Whole New Meaning with Voting

Cancel Culture – A Study in the Two-Faced, Self-Righteous Hypocrisy of Leftism

Build Back Better – Democrats Have a Plan

This site is my opinion only and is unpaid. I am a retired Paramedic/Firefighter with 25 years of service in the City of Dallas Fire Dept. I have a B.A. degree in Journalism, and A.A. degrees in Military Science and History. I have spent my life studying military history, world history, American history, science, current events, and politics making me a qualified PhD, Senior Fellow of the Limbaugh Institute, and tenured Professor Emeritus for Advanced Conservative Studies. 😄 It is my hope that readers can gain some knowledge and wisdom from my articles.
View all posts by dustyk103 →
This entry was posted in Climate Change, Conservatism vs. Liberalism, Culture corruption, Democratic socialism, Economy, Elections 2020, Fundamentals, Illegal Immigration, Obama's legacy, Politics, Racism, Right vs. Left, Social Justice, Socialism, Voter fraud and tagged Americanism vs. Socialism, Democrat Convention, Donald Trump, Joe Biden, Mail-in ballot fraud, Republican agenda vs. Democrat agenda, Republican Convention. Bookmark the permalink.