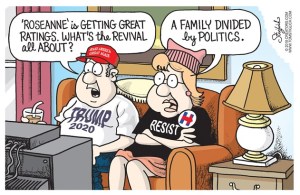 Liberalism represents the gravest threat to American freedom and they are achieving it by guilt tripping the gullible.  They call righteous people racists and demand they prove they are not by giving in to leftist demands.  Their primary target is white Christian male conservatives who are the backbone of American culture, Christians who uphold a high moral code, capitalists who have built prosperity, and patriots who have sacrificed for others.  These are the people who made America the great nation it is today.  But leftists, who are socialist atheists, liars and thieves, claim that Christians made their wealth by stealing from the poor.  This lie is easily exposed in the goals of the ideologies because it is leftists who make their wealth by theft, while the righteous make their wealth through trade.  Of the two ideologies; capitalism vs. socialism, capitalism has built the greatest middle class in history, while socialism only works until it runs out of other people’s money and has enslaved the most people in history.  Socialism must indoctrinate the ignorant into believing they are beneficial by lying about their ideology through corrupt teachers, media, and politicians.  This confuses the unwary who don’t understand two-faced leftists to be.  They slander America as the worst of countries that steals from the poor, but promotes poor people sneaking into the country to live off of taxpayers and remain as poor welfare voter slaves.  Socially there is Planned Parenthood indoctrinating children into abortion and sexual deviancy now teaching them homosexuality and BDSM as the norm.  This is how you train young girls to grow up and be submissive slaves to domineering men like they have in Islam.  Liberals from the northeast are moving south to flee from the oppressive taxation that liberalism inflicts on them in their states.  But instead of taking part in the Christian conservatism that makes other states more prosperous they corrupt them with their liberalism once again.  Leftists always blame others for the problems they create for themselves and take credit for the achievements of others.  Their dysfunctional logic is always predicated on false premises to promote their scams to take power and become the dictatorial control freaks so they can steal the wealth created by capitalism for themselves.

Do you abide by the demands of arrogant, snot-nosed kids?  Democrats are promoting foolish, snot-nosed brats like David Hogg demanding that adults yield to his demands that citizens be disarmed.  No Democrat is demanding that criminals be disarmed.  They want guns taken from law-abiding citizens and police to make the country safer for criminals.  Their reasoning is that if no one threatens a criminal with a gun then the criminal won’t harm anyone.  The greatest error that Republicans have made in the last hundred years has been to believe that outrageously stupid Democrat propaganda foolishness will not be believed or accepted by the general public.  They have neglected fighting back against the most extreme, radical propaganda that smears them as soulless haters willing to kill off poor people and children so they can make an extra dollar of profit.  This was because they thought no one would possibly believe such insane drivel.  But people proved them wrong with half the population swallowing the most outlandish lies as if they were gospel truth.

“Two things are infinite: the universe and human stupidity; and I’m not sure about the former!” – Albert Einstein

Liberals are dumb enough to think that socialism is a good ideology that will create wealth rather than steal it, that they can take guns off the street by abolishing the 2nd Amendment and outlawing them as they did with drugs, and that the world will end from global warming caused by mankind’s pollution.  Why would they believe Democrats when they tell them that invaders who hate America and just want to steal wealth away are beneficial to the economy?  It’s sheer stupidity, but it’s real for half of Democrats who don’t hate America yet believe anything that their leaders tell them.  The other half actually do hate America and want to see it destroyed.

Liberals exhibit proof that they are brain dead fools

Public education indoctrinating children into perversion needs to be disinfected

Read the conclusion of this article at; liberalsbackwardsthink.com

Raids by neighboring countries intent on stealing used to be violent attacks across the border.  Now it’s just infiltration to steal jobs and send the money back to their home country.  Corruption of the culture to glorify gangsters and promote drugs and hedonism is the foundation of the Democrat Party.  The Left promotes black racism as nobly fighting against white racism and their people are so lacking in moral clarity that they believe they are righteous in their racist ideology.  This is the kind of self-righteous hypocrisy taught by Islam and adopted by the Spanish Inquisition and Sicilian Mafia that Moslems controlled for some centuries.  This is the ideology of leftist Nazis and Communists that the Left venerates and tries to conceal their atrocities in the 20th century.  There is nothing the Left offers that is as good as what the Right freely gives.  They demand the righteous must compromise with them to be fair, but don’t compromise because when they get a little then they demand twice as much.  Give them an inch and they’ll take a mile.  They want absolute control and they’ll take it a bit at a time.  Leftists convince the gullible to surrender a right in order to get a foothold by which they can convince them to surrender more rights until they are all taken.  Like their pretentious claim they could take all guns off the streets (which would work as well as has taking drugs off the streets) they claim that all who invaded America by illegally crossing the border are Americans, too.  They claim Obama made record incarcerations of border busters, but that’s just all paperwork of his catch and release program.  Democrats have gotten greedy and believe they can force Trump to give citizenship to all of them rather than eject them from the country and be called a demonic, uncivilized leader with no humanity.  But Trump is made of sterner stuff than the typical weak-kneed Republican.  The leftist Democrats no more wants to secure the border until they get citizen rights for the invaders than they want to stop school shootings until they get gun confiscation.  Democrats want to fundamentally transform America from a constitutional republic to their very own banana republic dictatorship with themselves in the monkey seat.  People like Obama say the problem is “old people,” i.e. wise, knowledgeable, morally righteous, Christian white men.  The child that would lead the Left will march them right into the fascism of Hitler youths that everyone said could never happen here. 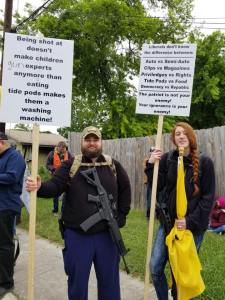 Action taken to prevent school shootings not what Left wants

20 Quotes you must hear about guns

This site is my opinion only and is unpaid. I am a retired Paramedic/Firefighter with 25 years of service in the City of Dallas Fire Dept. I have a B.A. degree in Journalism, and A.A. degrees in Military Science and History. I have spent my life studying military history, world history, American history, science, current events, and politics making me a qualified PhD, Senior Fellow of the Limbaugh Institute, and tenured Professor Emeritus for Advanced Conservative Studies. 😄 It is my hope that readers can gain some knowledge and wisdom from my articles.
View all posts by dustyk103 →
This entry was posted in Politics and tagged American Nazis, Christianity, Democrat propaganda, Donald Trump, Liberal Fascism, Liberalism, Obama sabotages America, Racism, White Privilege. Bookmark the permalink.