Social Justice!  This is the battle cry of the Left.  Fascism has been reborn in America with the attacks by Obama’s army of Black Shirts in the guise of the compassionate Left fighting for freedom.

They said it could never happen in America, but it is happening now.  Fascism has been reborn and they come in the form of liberal Democrats in black hoodies on college campi assaulting Christian conservative speakers and rioting on campus.  Burning books isn’t far away.  Liberal fascists have revised the playbook of Hitler, Mussolini, Stalin, Mao, and Tojo.  No longer do they claim to be the Master Race with the right to make all others their slaves.  They are falling back on a more ancient teacher of totalitarianism to now claim they are the champions of the poor, downtrodden, minorities and anyone who has a grievance or thinks life is unfair.

Democrats got a clue to doing this in the 1930s when they decided to propagandize the people into believing that they are the party of the little guy and Republicans are the party of the rich.  People who know nothing about Republicans and Democrats aside from what they learned from Little Orphan Annie believe this.  In the 1950s Saul Alinsky taught them how to subvert the rightfully elected government to overthrow Republicans, while Republicans forgot the lessons of Machiavelli’s “The Prince” on how to combat the wicked who seek to overthrow rightful rulers.  But it took their Moslem Messiah, Barack Hussein Obama, whose Islamic faith and knowledge of how Muhammad, the most successful socialist totalitarian dictator in history, showed them the way.  Seeing how the dictators of the 20th century all failed in persuading people to reject religion and put their faith in government they have found terror and subjugation to religion works wonders.

Combining this knowledge with modern psychology of how to successfully instill propaganda in people’s minds, leftists have unlocked the recipe of how to impose a totalitarian regime on an ignorant and unwitting populace to convince free people to choose to enslave themselves.  Globalism is the goal of the Left by which the advanced civilizations submit themselves to third world countries through cultural guilt by establishing a ruling elite “anointed by God – or rather, Allah.”  By convincing the ignorant peoples of free nations that their success is a result of greed and theft rather than hard work and moral action they subvert cultures to shift from them from advancing enlightenment to committing suicide.

Leftists and Rightists have opposite ideologies.  Rightists are those who established the Constitution of the United States of America founded on Christian principles and morals.  They wrote the book on liberty and fought and bled so that their children could be free from tyranny.  Leftists believe in the power of the ruler over the rabble.  They have always fought for America to be turned from a constitutional republic into a totalitarian dictatorship with a king rather than an elected president.  They believe people are not capable of living without government ordering their lives, i.e. being slaves to the state.

The Left uses deception and says the Right lies.  The Right stands by the truth and says the Left lies.  But the common man has a great deal of trouble discerning the difference between truths and lies.  Much of this is due to a deteriorating in the education system being corrupted by leftists.  For example, a growing economy and taxes is essentially a non-zero sum proposition, i.e. everyone can benefit.  For leftists the economy and taxes are a zero sum scheme in which the only way there can be a winner is if they take from the loser.  In their minds no one becomes rich without making someone else poor, and the richer one becomes the more people are made poor.

This is at the heart of leftist ideology that is born of ignorance and bred on immorality.  A Rightist sees a Leftist as a self-righteous hypocrite because they understand this fallacy.  But Leftists are not hypocrites who know what is right and then do wrong.  They believe what is wrong and reject what is right.  Leftists live in denial of right and wrong and think morality is grey.  Thus, they are not being hypocritical, but being true to their warped nature.  Like the scorpion and the fox they will destroy themselves without understanding they act against their own best interests in the belief that when they do wrong it is for their benefit.

The most important lesson to understand about the difference between the Right and the Left is that they do not work toward a common goal of prosperity for all by divergent paths.  The Left wants to destroy everyone on the Right.  They work for prosperity for themselves and declare those on the Right to be “unworthy.”  By this logic they can justify stealing and thereby prove that they do not live by righteous morals, but by immorality.  This is made evident by their belief that Robin Hood was a righteous man who “stole from the rich and gave to the poor” making anyone who is a thief a righteous man in their eyes.  But Robin did not steal from the rich.  He stole from the oppressive government of Prince John who was taxing the poor to enrich himself and his nobles.  Leftist Democrats are not Robin Hood stealing from the rich to help the poor.  They are Prince John stealing the wealth of the nation to help themselves.

So when you see them importing cheap labor to replace citizens, rioting on college campuses against free speech, take in Islamists under the guise of refugees who want to subvert and subjugate America to their god, and play Chicken Little saying they must take your money to “save the world” from the climate, then perhaps you will open your eyes and ears to see and hear how the Left is perverting the facts.  You will see how they delude themselves that they are telling the truth and that the truth is false “alternative facts.”  You will hear how they flood the zone of media with their propaganda to indoctrinate the unwitting.  You will know that the difference between the Right and Left is not two roads to the correct action.  You will understand that the Right stands for liberty and the Left stands for slavery.  Then you will know wisdom and find courage in righteous wrath to fight back against their wanton degeneracy. 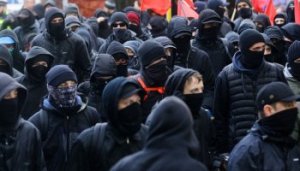 Fascists on college campuses put on black hoodies and masks as they riot and attack anyone who speaks righteousness against their criminal actions.  Democrats permit their lawless anarchy by having police stand down and watch as property is destroyed and people are attacked.  This is not America.  This is Hitler’s Germany.

Fighting Fascism – The War with the Left for America’s Soul

Al Gore demands $15 TRILLION for himself from everyone in the world to “fight” global warming.  Not fix it, not stop it, not solve it, but so that he can invest in “green technology” to “save the planet.”  His next movie – “Al Gore Saves the World!”

Dusty of Dallas says, “Weeee-doggy!  Tell you what I’m gonna do!  I’ll do even betta than ol’ Al.  I’m a gonna gar-awn-tee you a ticket right on thru St. Peter’s pearly gates into Heaven itself, and all for the low low price of $99.95!  Just send me cash, but if you send a C-note don’t expect your nickel back!  Or write a blank check to yours truly and I’ll be gettin’ that all taken care for ya, ya hear?”

Leftists say it is immoral to uphold immigration law, so mayors don’t have to abide by federal law for the benefit of the country.  This allows them to steal taxpayer money to give to illegals to buy their illegal votes to keep Democrats in power when the citizens realize they’re being had.  Mayors will even steal from police and firemen, violating the pensions for which they risked their lives in order to fund their illegal actions when the federal government takes action to stop them.  Democrats are making taxpayers slaves to the state with their debt and giving away taxpayer’s money to deadbeats and thieves.  As the Left works to make the people divided they blame Donald Trump as a divider.

Patriotic Democrats do not exist even in myth

ObamaCare is the first step in establishing socialized medicine by wrecking the health insurance industry and make the people completely dependent on government for healthcare.  Single-payer is the last step that is the goal of all totalitarians to put the people under the boot of their leaders.  Hitler did it by nationalizing all hospitals followed shortly after by taking over all businesses making their wealth the state’s wealth.

Promote submission through terrorism and teaching appeasement by indoctrinating the sheeple to make sheering them easy.  Islam is not a religion, but a theocratic form of government wherein the people are all kept oppressed under Sharia Law and all non-Moslems are made third class citizens subject to further oppression.  The goal of Islam is world domination wherein their theocratic rulers reign supreme and establish the ultimate totalitarian socialist state.

“Democrats haven’t been this mad since Republicans took their slaves away.” – Rush Limbaugh.  And now Donald Trump is threatening to do the same.

ARTICLES of how liberals backwards think:

The Trump Presidency – Hope is kindled

The Left is Never Right

This site is my opinion only and is unpaid. I am a retired Paramedic/Firefighter with 25 years of service in the City of Dallas Fire Dept. I have a B.A. degree in Journalism, and A.A. degrees in Military Science and History. I have spent my life studying military history, world history, American history, science, current events, and politics making me a qualified PhD, Senior Fellow of the Limbaugh Institute, and tenured Professor Emeritus for Advanced Conservative Studies. 😄 It is my hope that readers can gain some knowledge and wisdom from my articles.
View all posts by dustyk103 →
This entry was posted in Politics and tagged Al Gore, America, American decline, Barack Obama, Black lives matter, Campus riots, Christianity, Church of Liberalism, Climate change, Donald Trump, Fascism, Global Warming, Illegal Immigration, Islam, Jihad, Leftist ideology, Liberalism, Obama's Army, Rush Limbaugh, Sanctuary Cities, Socialism. Bookmark the permalink.