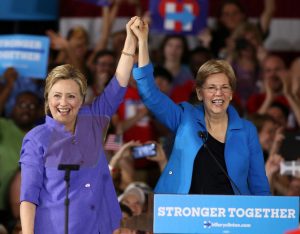 Brexit and Trump cause more dysfunctional backwards thinking by liberals.  Hill and Liz are Screech and Owl vying for the biggest whopper wreaking havoc on the campaign trail.

Reminiscent of Al Gore telling elementary school kids, they “instinctively know things their parents don’t know,” when attempting to brainwash them to believe in man-made climate change, liberals are telling their believers that Brexit was the result of – “the older less educated people outvoting “younger more educated people.”  If the younger people know better than older people then Hillary shouldn’t be running for president, Chelsea should be!

Liberals always think backwards, which accounts for why they fixate on what is wrong rather than what is right.  Because of this they have no intelligent solutions, only half-baked theories of how to solve problems.  They don’t understand that mixing cultures does not make a nation stronger, but that they are the cause of creating their own crisis.

Jihadis are having a field day converting Brits by coaxing them over being fair to Islam or by coercion and the threat of violence.  Older people understand what is happening far better than the younger generations who have never lived without the internal menace.  The EU may offer better trade, but it’s at the expense of national safety.  Borders exist for a reason and allowing those who want to destroy your culture to immigrate into your nation freely is no different than unlocking your home to criminals.

When it comes to Trump, Hillary fixes the eyes of her vacuous liberal followers on a casino that went bankrupt and not his hundred other enterprises that have been huge successes.  She slanders Trump as wanting to be in bed with banks which is where she and Obama have been for years!  The crony socialism of Obama and Clinton is what is tearing America down, and young people are following like lemmings as they cheer for them importing cheap, illegal labor to take their jobs.

Fauxcahontas and Hillary’s Havoc and lies

As if that is not backwards enough, no Democrat asks what Hillary has accomplished in her life, asked what she has built, or asked how she contributed to the betterment of America.  This is an Obama rerun in which Democrats elected a junior senator who had no accomplishments, no skills, and no talents except to speak well from a teleprompter.  Obama’s half-baked ideas of him and his cadre of academic socialist boobs who engineered today’s economic decline is still admired by the oblivious social media crowd.

This site is my opinion only and is unpaid. I am a retired Paramedic/Firefighter with 25 years of service in the City of Dallas Fire Dept. I have a B.A. degree in Journalism, and A.A. degrees in Military Science and History. I have spent my life studying military history, world history, American history, science, current events, and politics making me a qualified PhD, Senior Fellow of the Limbaugh Institute, and tenured Professor for Advanced Conservative Studies. 😄 It is my hope that readers can gain some knowledge and wisdom from my articles.
View all posts by dustyk103 →
This entry was posted in Election 2016 and tagged 2016 Presidential Campaign, Banking scandals, Brexit, Democrat economy, Donald Trump, Education, Elections 2016, Elizabeth Warren, Hillary Clinton, Hillary scandals, Liberalism, Liberals backwards think. Bookmark the permalink.