America’s war with Islam – where Bill O’Reilly is wrong

Sharia Law vs. the U.S. Constitution and the 1st Amendment:  Is the pen truly mightier than the sword?  The Left is all for freedom to offend when it comes to denigrating Christians, but all for censorship when Christians push back.

“America will never be at war with Islam.” – Barack Obama

The problem with this belief is that Islam is at war with America – and we are losing.  After the failed Jihadi attack on the cartoonists in Garland, TX, a great debate has broken out.  But the debate is not about the violence of the Islamic religion and the evils of Jihad.  The argument is over the righteousness of openly mocking a religion.

O’Reilly and Rev. Graham say Mohammad cartoons should not be

In one respect, a media pundit like Bill O’Reilly and the esteemed Rev. Franklin Graham are right.  It’s not nice to mock others.  As Christians we certainly have detested the mockery and blasphemy directed at our faith in Jesus Christ.  And as Jesus taught, we should do unto others as we would have them do unto us.

But Jesus was speaking of how to behave toward each other in a civilized world wherein people act badly.  He taught how to confront those who would act sinfully, maliciously, do immoral deeds and act wickedly, not how to confront savages who only want to kill you or enslave you.  There is nothing civilized about war, and in war it is not only right, but it is fair to fight fire with fire.

Most Americans have no idea they are currently the victims of a war that Islam has waged on the world since its inception and they need to have their eyes opened.  They believe the teachings of Mohammad to be benign and have no knowledge or understanding of how Mohammad lived his life and taught his religion.  They believe when they are told that Jihad is an “inner struggle” against wickedness in the heart, which is a deception Mohammad used to spread Islam.

The truth about Islam is that, unlike Christianity that, as properly taught by Jesus, gives people the liberty to choose Christ or reject Him, Islam only offers submission or oppression.  True, Christians have inflicted their religion on others in the past, but mostly to eliminate their pagan religions that preach the gloriousness of destroying others not of one’s tribe.  Some corrupt men have occupied the throne of the papacy, and there have been many wicked men who inflicted harm on others in the name of Christ, but for the most part Christianity is as Jesus taught.

Mohammad, on the other hand, was extremely violent, even downright murderous in his enactment of his religion.  He waged a war to force his religion on the people of Mecca and the Arabian Peninsula.  After his death, his followers led armies of fanatics in Jihad into Europe, Asia, and Africa.

This is a lie and he knows it!  The Jihadis of ISIS are not violating the teachings of Mohammad.  They are following his teachings precisely as laid out in the Koran and the Hadith.  Obama has aided in the unleashing of the Jihad in the Middle East and around the world by his open assistance of the Muslim Brotherhood.

Had the two Jihadis that attacked Garland, TX been successful, no doubt the liberal media would have extolled the tragedy that these poor, dumb hicks brought evil down on their own heads.  But because one courageous Garland police officer literally stopped them dead in their tracks, they instead condemn Pamela Geller and the participants for instigating the attack.  This is the same as blaming a pretty woman for being raped because she put on make-up.

What Ms. Geller did was bring out the truth of Islam, that it is a religion of hate, violence, oppression, and slavery.  While taqiyya, the practice of deception as advocated by Mohammad, is being practiced by those who are spreading Islam into the West, some Imams are speaking the truth.  The truth of Islam is that Islamists want to inflict Sharia Law on the world and are waging a Jihad to do so, and they will not stop until all people are under the boot of Mohammad and his god Allah. 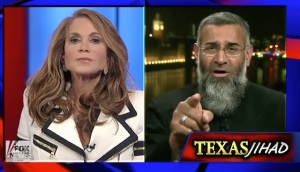 This isn’t happening in Saudi Arabia, or Yemen, or Iran.  This is here in America!  Americans have a choice; do they continue to allow the religion of Islam to spread into the land of the free until it becomes strong enough to subvert our laws and take away our freedoms through democracy, or do they push this fascist religion back before it becomes a revolution to overthrow the greatest nation in the history of the world?

American atheist socialists are allying with Islamists to crush Christianity in America.  They have been suppressing Christian teachings in schools and extolling the virtues of Islam.  Like the Communists allying with the Nazis at the beginning of WWII, they will rue the day they believed that the enemy of their enemy is their friend.

Islam is spreading out of the Middle East where it has been held in check for centuries, emerging in Europe and America in what they know as the Grand Jihad, the infiltration of the West.  Is America still the home of the brave?  Or will we cower under the lash of Islam?

Pamela Geller and others who seek to bring out the truth of Islam are now under threat of death by this foreign power.  Leftists call her exhibition “extremist” speech.  Saying ‘Christians eat babies’ is extremist; saying Islamic Jihad is murderous oppression is just telling the truth.  The real question is; what are Americans going to do about it?

Megyn Kelly makes the case for free speech in America

Islamophobia – It’s not an irrational fear if they’re really trying to kill you.

Mohammad – the First Terrorist and his religion of self-imposed brainwashing

The Final Solution to Islamic terrorism and the Jihad

Proof of fraud – the Democrat agenda to tax American wealth

Survey – Do you believe Islam is;

This site is my opinion only and is unpaid. I am a retired Paramedic/Firefighter with 25 years of service in the City of Dallas Fire Dept. I have a B.A. degree in Journalism, and A.A. degrees in Military Science and History. I have spent my life studying military history, world history, American history, science, current events, and politics making me a qualified PhD, Senior Fellow of the Limbaugh Institute, and tenured Professor Emeritus for Advanced Conservative Studies. 😄 It is my hope that readers can gain some knowledge and wisdom from my articles.
View all posts by dustyk103 →
This entry was posted in Election 2016, Islamism, Obama's legacy and tagged 1st Amendment, America, Atheism, Christianity, Communists, Islam, Islam in America, Islamic terror, Jihad, Nazis, Sharia Law, Socialism, Terrorist attack Garland TX, Terrorists attack cartoonists, U.S. Constitution. Bookmark the permalink.