Addendum to “Christians crushed the Inquisition; Moslems endorse the Jihad” 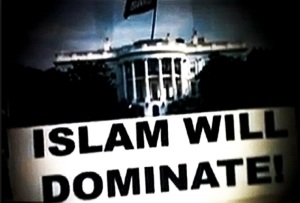 The complacency of Obama and the condemnations of the Left for those who fight the Jihad are made clear when examining their actions and motives being in conflict with their words.  Conservatives ask Obama; when is he going to tell Jihadis to stop clinging to their guns and religion as he did to Christians who haven’t been murdering anybody?  Now leftists want Jihadis not to be associated with Islam?  That’s like not equating the SS with Nazis.

The Left owns the ideology of hate and violence against free speech and violence against the innocent.  They promote the ideology of socialism lived by Nazi Germany, Soviet Russia, Red China, Imperial Japan, Fascist Italy, and Islam.  For the last six years every mass shooting, bombing, or terrorist attack has been attributed by leftists to the TEA Party until the actual perpetrators, psychopaths and Moslems, were found out.  It is time for the pot to stop calling the tea pot black.

Jihad is not radical Islam, it is the heart and soul of Islam according to the teachings of Mohammad.  The “inner struggle,” the peace first preached by Mohammad at the beginning cannot be held to be sincere.  Peace was the hook by which Mohammad lured followers into his clutches, and praying five times a day was how he made them fanatics mindlessly obeying his directives of vengeance.

His rejection by the tribal leaders of Mecca, when they refused to bow to his demands they worship his god, is the catalyst revealing his true intentions.  Calling on his followers to act in vengeance, to steal, rape, and murder Meccans and Medinans who spoke against him, reveals his heart and soul.  Those who questioned Mohammad when he instructed followers to commit acts of immorality and evil, including murdering the innocent and his taking to wife a girl child which, even then, is a grievous sin to have sex with a child who had not reached puberty, to them were always answered with the response, “Allah says it is allowed to his Prophet,” and the brainwashed rabble accepted his word.

Jesus is called a prophet of Islam, a religion that declares God has no son and Jesus is no Messiah.  Christians always invite all faiths to come to Christ, but some foolish people are inviting people of Islam to worship their god in Christian churches.  This is like inviting a Satanic coven to worship Satan on the altar of Christ.  God and Allah are not one in the same in the minds of believers, only in the minds of atheists who think any belief in spirituality is self-delusional.

In truth, Jesus did foretell the coming of Muhammad when he said, “Beware of False Prophets.  You will know them by their fruits.”  The fruits of Muhammad have been murder, war, slavery, and the oppression of billions of people over fourteen centuries.  The Jihad throughout history as waged by the Arabs and the Turks, and today by the Africans and the Asians has never been about teaching the “peace of Islam” to others, but subjugating all under Sharia Law on pain of death.

Some people think there are two Islams, one of peace, one of Jihad, but Jihad was Mohammad’s plan from the beginning for those who rejected Islam after he had built up his following.  But, like most human beings, most Moslems do not want to live lives of war, but of peace and prosperity.  If people who are raised Moslem reject his teachings of Jihad, how can they continue to say they are truly Muslim?

Most will not leave the faith or hear the teachings of Jesus because they would be under sentence of death by their fellow Muslims.  What decent human being would want to remain in a religion that puts such strictures on its people?  Yet there are still those today who are listening to the teachings of the early stage of Jihad that Islam is peace, and they are being duped the very same way the first Muslims were, and that is how Islam is spreading in America.

Everything about Islam is opposite and conflicts with Christianity.  Islam depicts the Apocalypse, the final battle between Good and Evil, as the coming of the 12th Imam.  This man has all the attributes of him in the Book of Revelations who is called the Anti-Christ.  In Islam, Jesus does not cast him down, but bows to him in submission and acknowledges Islam as the True Faith.

All men are sinners and becoming a Christian does not mean they will never sin again, only that Jesus will forgive them their sins. There are also those who only say they are Christian as a facade.  Wikipedia says the USA is 80% Christian, but only half of them attend church, and only half of those profess a personal relationship with Christ. Christians are not perfect, but in a paradigm from wickedness to righteousness, all sin begins on the Left.

In addition, what is oppression to the Left?  Taking Ferguson as an example, if they are not free to loot, rape, and murder as they please they are being oppressed.  American liberty does not mean being at liberty to do evil without taking responsibility for one’s actions and facing the consequences.

American ignorance of Islam is profound.  When people like former President Carter say things like, ‘if people study Islam they will learn it is a great religion,’ prove that the American Left wallows in ignorance.  No Christian would call an anti-Christian religion great and suggest people learn that it is great.  Just because it is a religion will a billion followers does not make it great, it just makes it large.

Obama, raised on Islam, deflects American efforts away from Jihadis and toward “all extremists.”  What extremists are there besides Islamic Jihadis?  The TEA Party?  Obama’s imagined “extremist” enemies are the good and responsible Christian patriots of the country he grew up being told were the source of evil in the world.  Americans have been fooled, and they are not done being fooled, but they are being undone by a fool.

Since its birth under Mohammad, Islam has been the bane of the world causing the deaths of tens of millions, and the oppression and enslavement of billions.  Certainly they kill each other, and evil fighting evil is always a good thing like the Nazis and Communists turning on each other during WWII.  But eventually one will emerge to unite evil against the world, and they may do so with the help of the free, Christian nations just as the Nazis and Communists did in the 1930s.  The world cannot advance civilization so long as this darkness breeds savages to tear it down.  Islam has no place in the civilized world.

An ex-Moslem’s warning to America

Social liberalism in the 21st century is based on atheist socialism and is not that of the 19th century liberal based on Christian capitalism, today know as conservative Christianity.  The Left hijacks the language and corrupts terms to fool the ignorant.  Today’s liberal is not the same as America’s greatest presidents; Washington, Jefferson, Lincoln, Roosevelt, and Reagan.

“Liberalism is born in ignorance and bred on immorality.”

Why are there no Muslims in Star Trek?

Jihadi training camps in the United States (It’s bad enough we have redneck idiots playing soldier, now we have Moslems training to wage Jihad in America, not making an inner struggle to stop it.)

Islam has no place in the civilized world

The teachings of Jesus and Mohammad side-by-side comparison

Jesse Watters at ‘Stand with the Prophet’ convention

Jesus vs. Muhammad in five minutes (Sure, this is comedy, it is very funny, but it is all truthful events in the life of Mohammad.)

Black Jesus is not the Christ of the Bible, but the Jesus of the Koran

SURVEY – What do you believe Moslems believe about Jesus? 1 question

SURVEY – How well do you know Mohammad and Islam? 10 questions

SURVEY – What is your American Dream? 3 questions 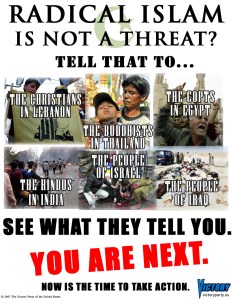 This site is my opinion only and is unpaid. I am a retired Paramedic/Firefighter with 25 years of service in the City of Dallas Fire Dept. I have a B.A. degree in Journalism, and A.A. degrees in Military Science and History. I have spent my life studying military history, world history, American history, science, current events, and politics making me a qualified PhD, Senior Fellow of the Limbaugh Institute, and tenured Professor Emeritus for Advanced Conservative Studies. 😄 It is my hope that readers can gain some knowledge and wisdom from my articles.
View all posts by dustyk103 →
This entry was posted in Conservatism vs. Liberalism, Islamism, Obama's legacy, Religion and tagged America, Barack Obama, Christianity, Islam, Jesus Christ, Jihad, Prophet Mohammad, Religious freedom, Right vs. Left, Terrorism. Bookmark the permalink.

2 Responses to Addendum to “Christians crushed the Inquisition; Moslems endorse the Jihad”