Credibility – a term that is lost on liberals 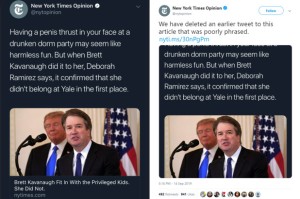 Leftist media is publishing lies then retracting them the next day.  “Russian oligarchs co-signed Trump’s loans.”  “Kavanaugh molested women.”  These efforts at creating fake news is why the left has earned Trump’s moniker and the public’s derision.  Democrat media cannot be trusted.  They are the boy who cried wolf on steroids.  They have proven repeatedly that they will tell lies in the hopes that their fanatic zealots will not listen when they revoke their lies.  This is the primary goal of Democrat activists pretending to be journalists.  This is also the reason that liberals suffer from their delusions.

“‘Why would the New York Times do this?  Why would they knowingly print something so egregiously wrong, knowing there was evidence?’  Because the point is not whether it’s true!  The point is whether it works as a smear!” – Rush Limbaugh 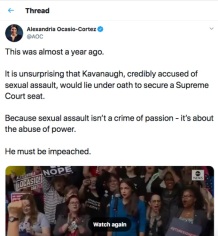 The NYT’s lies had an immediate effect on liberal wacko dolts like AOC who instantly demanded Kavanaugh’s impeachment.  She is clearly still deluded believing that the false allegations presented at his hearing were all true.  Liberals always respond to insufficient facts as if they were fact.  That’s how Biden came up with his quote, “We believe truth over facts,” because to leftists their truth matters more than the facts.  Their first response to any accusation of Republicans is always guilty even if proven innocent on the basis that allegations are more important than facts.  Just as they always jump to conclusions against Republicans, they always announce their own criminals to be innocent regardless of the evidence against them.

What people on the left and right call “Fake News” is either news that tells the truth or news that is wholly fraudulent.  The left calls FOX News and conservatives like Rush Limbaugh liars and cheats.  But their evidence lacks credibility because the facts that they say prove them right are easily discredited by examination.

The right calls leftwing media like CNN fake news because their stories are all discredited.  Their facts are twisted and corrupted by warped minded individuals.

Both sides have their bias, but only one side tells lies.  Just because they use some true facts doesn’t make their conclusions true.  That’s why leftwing media brainwashes its zealots to not listen to the other side so they do not realize they have been duped.  They teach them to be radical fanatics causing liberals to become blind to their own fundamental bigotry resulting in their mental instability.  This dysfunction causes them to be irrational thinkers suffering from Liberal Derangement Syndrome. 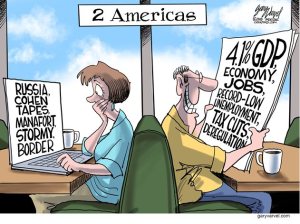 Russian collusion, climate Armageddon, Republican racism, Trump economic recession; how many beliefs do liberals hold as fact that are proven frauds?  Democrats teach liberals that all life on Earth will die if they don’t eliminate carbon in the next ten years.  Then they announce plans to make America “carbon free” in the next thirty years to say nothing about the pollution created by the rest of the world.  Does anything click in these liberal’s brains that there’s something wrong with what they are being told?

I have a degree in journalism.  I’ve been educated, studied, and recognize the difference between journalism, opinion, and propaganda.  Being highly intelligent, well educated, and well-informed, I can identify what in the blogosphere today is truth, what is opinion, and what is lies.  Liberals accuse conservatives of living in their own bubble only listening to FOX News and Rush Limbaugh.  The difference between us and liberals is that FOX and Rush both play back what liberals are saying and reporting in context with what they mean.

They then present the counter argument that makes sense and calls out the lies of the left.

What you don’t hear on liberal news is what people on FOX and people like Rush say in the context in which they say it.  The left always misinforms and misrepresents the facts to sway the listener to their own bias.  That’s why liberals end up believing frauds despite mountains of proof that they’ve been lied to, and those inconsistencies result in an insanity known as LIBERAL DERANGEMENT SYNDROME.  Democrats rely on activist judges overruling Constitutional law to keep Republicans from upholding the law.  That’s why liberals can be convinced that allowing illegal immigrants to freely invade America, take away jobs from Americans, and be given free benefits from taxpayer money is considered by them to be righteous.

Democrats can’t tell the truth because if they do, like Beto did when he said he would have police and soldiers go house to house to seize people’s guns and kill any who resist, then

Americans would recoil in horror and rise up against them.  (Oh, but wait, liberals say that he didn’t say that.  He said he would invoke a “mandatory buy back” law.  What do you think “mandatory” means?  What do you think liberals cheered for when he announced he was going to take people’s guns?)  That’s why liberals deliberately speak in vague terms.  That is for two reasons; one, because deceivers must conceal their true nature, and two, because their dupes have no specifics on which to base their opinions.  They only speak in generalities that could misinterpreted to mean anything.

In an interview with liberals, Steve Crowder asked liberals to explain to him why CNN is not fake news.  He delves into their thinking which is always shallow and vacuous.  The

degree to which these young liberals have been misguided is astounding.

The facts are that virtually all Democrats and many Republicans are nothing but corrupt politicians duping the people.  Rooting out corrupt Republicans is difficult, but it is damn near impossible so long as their corrupt Democrat masters rule the roost.  Unless Republicans take back the House from Democrat voter fraud then President Trump will not be able to build the foundation that will keep America great.  It is Democrats, not Trump, that have no credibility.  But that doesn’t matter to vacuous liberals.  The only solution is to use executive orders to force voter ID on the left so that their illegal aliens and voter cheats cannot steal the election that they say they have a right to do because they falsely claim Trump stole it from them.

Wake Up! The New York Times Didn’t Make a Mistake — They Smeared Kavanaugh on Purpose!

[Author’s Note: As Rush Limbaugh correctly states for anyone who has eyes to see and ears to hear, Democrats never tell the truth and their media is merely activists promoting their lies rather than the facts.  Their smears and slanders will be never ending in hopes of duping the next ignorant person who is fool enough to believe them.  The saying, “Believe half of what you read and none of what you hear,” can be applied to our government.  “Believe half of what Republicans say and none of what Democrats say.”

Democrats have nothing of value to offer America.  They only have their smears of people who are better than them.  As the negative pole of the political spectrum, their only goal is to bring down Republicans to their level.

Donald Trump has proven he can wrestle them in the mud and smash their faces in their muck.  Liberals prove they are the people to whom Lincoln referred when he said, “You can fool some of the people all of the time.”  Leftwing journalists are not to be trusted on anything they say.

That’s why I don’t even listen to the news or media reports for the first twenty-four hours because most of what they say is discredited in a day.  The goal of Democrats is to unmake America, eliminate the Constitution and Bill of Rights, and fundamentally transform America into their own socialist toilet.  That Trump is undoing what Obama has wrought has made them insane and they have thrown off the flag in which they wrapped themselves as their cloak and stand naked before the world as the communists they have always been.]

Leftist Demonrat Propaganda is the Cause of All Terrorism

This site is my opinion only and is unpaid. I am a retired Paramedic/Firefighter with 25 years of service in the City of Dallas Fire Dept. I have a B.A. degree in Journalism, and A.A. degrees in Military Science and History. I have spent my life studying military history, world history, American history, science, current events, and politics making me a qualified PhD, Senior Fellow of the Limbaugh Institute, and tenured Professor Emeritus for Advanced Conservative Studies. 😄 It is my hope that readers can gain some knowledge and wisdom from my articles.
View all posts by dustyk103 →
This entry was posted in Democratic socialism, Elections 2020 and tagged Brett Kavanaugh, Donald Trump, Fake News, Liberalism, Liberals Believe Fake News, NYT liberal rag of record, NYT Retraction Kavanaugh. Bookmark the permalink.