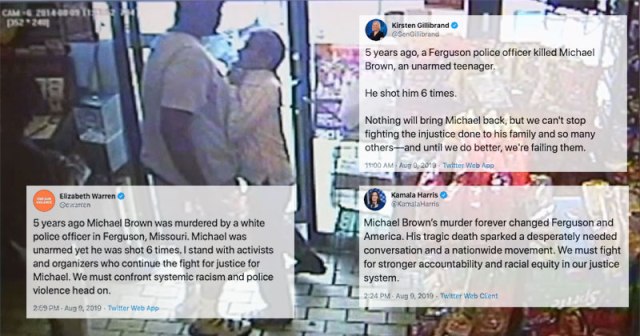 Democrats Presidential candidates are again tweeting the exposed lie that Michael Brown was murdered by a racist white cop while trying to surrender.  They are celebrating the life of a vicious criminal thug killed while trying to murder a police officer. 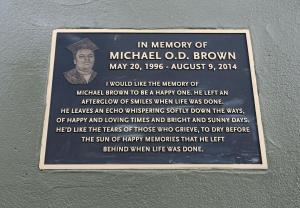 Their story that he was shot in the back with his hands up trying to surrender was exposed by physical evidence and honest witnesses who corroborated the truth.  Yet they maintain their lie.

Do they celebrate the anniversary of Dallas police officers being slaughtered, too?  You bet they do!  Leftists celebrate criminals and vilify the righteous.  Democrats are stoking the fires of racial division even as they blame Republicans for racism in America as being white supremacists. This is how the Big Lie is used to perpetrate evil by indoctrinating ignorant liberals into lies that started the

Justice for Michael Brown – the facts in black and white

When does liberal ignorance become stupidity then descend into insanity?  Democrats appeal to the basest emotions in people as they claim to be working for the glory of America.  They institute harmful policies then blame Republicans for the results.  When people repeatedly exhibit two-faced behavior, most intelligent people learn to recognize their lies.  Ignorance is a lack of knowledge, while stupidity is an inability to learn, and insanity is doing the same thing over and over expecting a different result.  What excuse do liberals have to continue to believe Democrats?

NFL Links Arms against Police; Fans should shout, ‘BACK the BLUE!’

This site is my opinion only and is unpaid. I am a retired Paramedic/Firefighter with 25 years of service in the City of Dallas Fire Dept. I have a B.A. degree in Journalism, and A.A. degrees in Military Science and History. I have spent my life studying military history, world history, American history, science, current events, and politics making me a qualified PhD, Senior Fellow of the Limbaugh Institute, and tenured Professor for Advanced Conservative Studies. 😄 It is my hope that readers can gain some knowledge and wisdom from my articles.
View all posts by dustyk103 →
This entry was posted in Democratic socialism, Elections 2020 and tagged Democrat presidential candidates, Democrat Slanders, Democrats stoke fires of racism, Justice for Michael Brown, Leftist Big Lies about Trump, Liberal Ignorance Stupidity Insanity, White Supremacy. Bookmark the permalink.