The biggest red flag of proposed Red Flag laws is that Democrats want to write them.  The anti-2nd Amendment party that wants to confiscate guns from lawful citizens rather than from criminals and psychotics wants to be the ones who write the Red Flag laws.  What their idea of a red flag should be to confiscate guns is not what is best for the people, but for their criminal constituents.  Democrats have a long, storied history of convincing Republicans to make laws that Democrats use in the future to corrupt American culture through their misapplication and misinterpretation of the law.

Democrats have been trying to take people’s guns for generations.  Their solution to every mass shooting is always to disarm law-abiding citizens.  An unarmed populace of citizens always becomes subjects in socialist dictatorships.  Every mass shooter has been on the FBI’s radar and they have dropped the ball.  Why has that been the case?  What would change with Red Flag laws?

What Democrats would propose as Red Flag laws is taking guns away from anyone they deem to be “mentally unstable.”  How can liberals determine who is mentally unstable when they don’t recognize themselves as being unstable?  Liberalism is literally the definition of emotional instability leading to dysfunctional thinking.  Every mass shooter as well as every presidential assassin has been a leftist.  Liberals wouldn’t put themselves on this list.

They would outlaw guns in the hands of conservatives, the military, and police as being inherently violent people because they are willing to defend themselves.

They would condemn everyone who does not stand with them in their wrongheaded beliefs.  They would decry Republicans and conservatives as haters, and Christians as irrational people believing a fantasy.  They would condemn military veterans as being inherently violent and unstable.  They don’t talk about seizing guns from violent criminals or drug addicts who are not only mentally and emotionally unstable, but also a direct threat to those around them.  In NYC, the leftist liberal mayor even outlawed police’s search and seizure protocol.

This is how socialists would convince the righteous to allow themselves to be disarmed by their rulers.  This is how socialists dupe the people into giving up their rights to freedom.  Guns are not the problem.  They are the tool.  Without guns murderous people turn to using knives and clubs.  Terrorists will use bombs and chemicals.  The problem isn’t the tools. 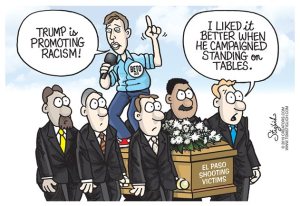 The problem is people without morals, God, family, or compassion, along with a lack of good sense or a real education, who are the problem.  The problem in America is that people are being taught wrong.

Democrats always warp and twist the laws to their benefit at the expense of the people.  Look at gun control laws in Chicago – America’s murder capital.  Look at the border laws.  Look at tax laws they passed to hang George H.W. Bush’s campaign promise.  Look at the constitutional law to allow anyone to vote that they use to give the vote to illegal aliens.

Leftists never saw a law they didn’t like.  Before you say “there outta be a law” you should consider who will make that law.  President Trump has always known better than to trust a Democrat.

Despite CNN claiming he says he will make the NRA come around to their way of thinking, anything you hear in the fake news media is designed to mislead you.  Donald Trump is nobody’s fool.

Morally intelligent red flag laws can only be developed by Republicans who listen to the NRA and families of shooters.  The only way to truly work such a red flag would be to force law enforcement to listen to family, not the government.  The FBI knew of all mass shooters, yet most of them did nothing.  Leftists and liberals often overlook the criminal behavior of their families until it is too late.  No liberal can be counted on to do what is necessary or what is right.  We already have extreme background checks and there are no gun show loopholes.  What liberals propose is never good sense.

This site is my opinion only and is unpaid. I am a retired Paramedic/Firefighter with 25 years of service in the City of Dallas Fire Dept. I have a B.A. degree in Journalism, and A.A. degrees in Military Science and History. I have spent my life studying military history, world history, American history, science, current events, and politics making me a qualified PhD, Senior Fellow of the Limbaugh Institute, and tenured Professor for Advanced Conservative Studies. 😄 It is my hope that readers can gain some knowledge and wisdom from my articles.
View all posts by dustyk103 →
This entry was posted in Democratic socialism, Elections 2020 and tagged Common Sense Gun Laws, Democrat Gun Control, FBI Failures Mass Shootings, Mass shootings, Red Flag Laws, Trump Democrats Gun Laws. Bookmark the permalink.