Liberal scientists say that global warming is making it harder for food to grow.  Not that it’s harder to grow food because of dry conditions, but that it is harder for the food to grow.  This backwards liberal thinking is the opposite of science.  How they think the oceans can rise and the land dry out while the atmosphere gets warmer is as intellectually backwards and absurdly ignorant as one can get.  There’s a vast gulf between what Democrats call truth and the scientific facts they say the right denies.

As the Earth warms from the last glacial period, more land becomes arable as the temperate zones of the world expand.  Look up those words and learn to understand them so that you are not so easily duped by people who claim to be scientists.  Arable land means land that can be farmed to grow food.  Temperate zones are climatic regions of the world where it is most pleasant to live, i.e. not too hot all the time like tropical zones, and not too cold like arctic zones. 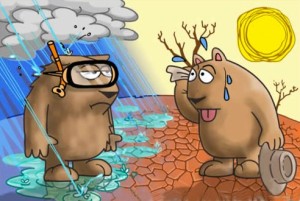 Even then, however, millions of people live in tropical zones because that it where the greatest rainfall occurs.  As the planet warms there is more land that can be farmed for food.  So how is it harder for food to grow?

How do liberals explain their “science” that the climate can warm and there be less moisture in the atmosphere on a planet that is 70% water?  The short answer is they can’t because they are ignorant.  The long answer is that they don’t have the first clue how the climate works and that their capacity to understand climate change is as stupid as their belief is that they can predict the future.  Liberals have zero understanding of how growing food works.  They sit and eat their vegetarian meals while scorning those who eat meat, especially such animals as catfish that are “bottom feeders,” meaning they eat other fish’s poop.  Do these boobs know what farmers use to fertilize their vegetables?

Leftist’s solution to all things is always the same.  More people should die off so that there are more resources for them.  Does that sound like the plot of a recent movie and the bad guy’s motive for wiping out half of all life?

Avengers Endgame and the Epic Battle Between Good and Evil

Appeasing the Climate Change gods – the Science of Duping Liberals

Liberalism and the Science Stupidity of their Global Warming Religion

This site is my opinion only and is unpaid. I am a retired Paramedic/Firefighter with 25 years of service in the City of Dallas Fire Dept. I have a B.A. degree in Journalism, and A.A. degrees in Military Science and History. I have spent my life studying military history, world history, American history, science, current events, and politics making me a qualified PhD, Senior Fellow of the Limbaugh Institute, and tenured Professor Emeritus for Advanced Conservative Studies. 😄 It is my hope that readers can gain some knowledge and wisdom from my articles.
View all posts by dustyk103 →
This entry was posted in Climate Change, Democratic socialism, Elections 2020 and tagged Climate change, Democrat Predictions, Global Warming, Liberal science, Truth and Facts, UN Food cannot grow. Bookmark the permalink.