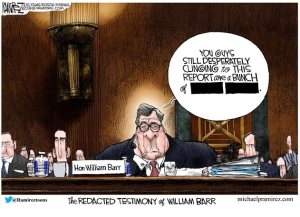 Constitutional Law is founded on the principle that we are innocent until proven guilty.  Leftists, however, have their ideology founded in conservatives charged with wrongdoing are guilty until proven innocent and even then remain guilty.  Liberal Democrats deliberately misapply American law for their own illicit ends up to and including giving actual criminals a pass.  Insane Democrat trolls, Nadler, Schiff, and others maintain that AG Barr is hiding Trump’s guilt proven in the Mueller Report despite that report being made public avowing Trump’s innocence.  They call Barr in to testify before Congress to smear his character in order to slander and dismiss his investigation of their own guilt of spying on and slandering President Trump. 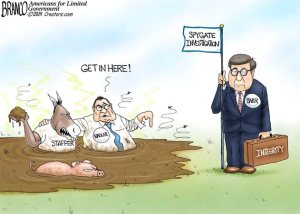 Hillary continues to declare election was stolen from her

Democrats declared Trump is guilty until proven innocent.  Now that he has been proven innocent, they maintain that he is guilty and deny their wrongdoing.  To maintain their lie, they declare the innocent to be guilty to justify their crimes.  For example, while Democrats maintained that Trump was guilty of collusion and obstruction of justice to steal the election, they readily admitted to spying on his campaign, even bragging about it.  Now that he has been proven innocent, they deny spying and continue to maintain his guilt.

Leftists live in denial of the truth saying that those who speak truth deny the facts.  Theirs is an emotionally based irrationality that denies reason that disproves their version of reality.  It takes a reasonable, rational person to admit they are wrong.  It takes a criminal to refuse to admit they are guilty in the face of the proof.  Liberals believe the righteous have their own facts, but any simple investigation of the facts reveals liberals to be liars.  When that is uncovered, they immediately devolve into name calling and character assassination in an attempt to discredit the truth. 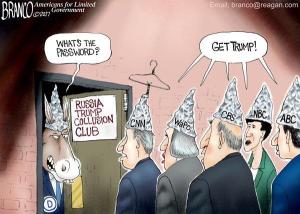 Democrats declare those who speak the truth to be irrational for not admitting they are wrong.  This projection of their own guilt is due to their own egos not accepting the truth of their own wrongheaded thinking.  The committed leftist becomes a pathological liar who will always make excuses and blame others to justify their lies.  They deny scientific facts like; there are only two human sexes, and that CO2 and climate change are naturally occurring, then declare that others deny science for not believing in their self-imposed delusions.

The same is true in the case of Donald Trump.  They cannot admit they are wrong because, if they did, then they would be confessing to their felony of criminally spying on the Trump campaign.  They slander AG Barr in their efforts to discredit the man so that, when he reveals the truth behind the facts that Democrats are the ones violating the law, they can then declare him to be biased against the truth.  This only works in the minds of liberals who do not think rationally or pay attention to events.  They will deny the truth as they do in all things.  The only solution is to bring those who committed these treasons to justice and damn Democrat efforts to torpedo justice. 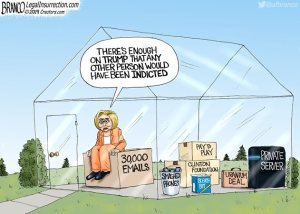 Mueller himself is now slated to testify before Congress on his report.  We shall see if he tells the truth or descends into lies.  One lie he told in his report has already been exposed.  He claimed that Russians began trying to hack Hillary’s email five hours after Trump joked at a rally that they should try to find her missing emails for the media.  It was already known that she destroyed those servers on which her emails were stored over a year before while under subpoena.  How would Mueller know what Russia spies were doing and when they were doing it?  Has he been colluding with Russia?

Obama Spied on Trump — And the Drive-Bys Covered It Up

Rush Limbaugh: “[Emmet Flood’s letter] was intentionally put out now to rebut the Mueller report.  I’m telling you, you should really go to RushLimbaugh.com and click on that link and read it, because it rebuts the Mueller report exactly as you think the Mueller report should be rebutted.  And it does it in a point-by-point way on the matters of the law.  It rejects this report as being in violation of the law, in violation of prosecutorial ethics, in violation of everything that we understand about the American system of justice.  Pointing out that Mueller outrageously inverted the burden of proof!  Mueller starts this investigation claiming that he’s gotta find a way to exonerate Trump in order to clear him.  No prosecutor ever does that!  That’s not our system!” 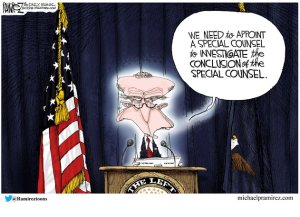 On the Warpath: Emmet Flood’s Letter Signals a New Phase

That Comey never charged Hillary with obstruction for destroying subpoenaed evidence is a crime in itself.  For Mueller to implicate Trump as instigating Russian spying is another crime.  These conspirators, and their masters who initiated this attempted coup all the way up to Obama, must be brought to justice.  They cannot be allowed to retake power and sweep their crimes under the rug.

Mueller certainly won’t admit that he knew the collusion charge was a fraud from the start, and that all of his efforts were a witch hunt to discover any sort of crime by which Democrats could condemn Trump and his associates.  The only recourse is to conduct a deep investigation of the Deep State to expose all the corruption in Democrats of the Obama regime. 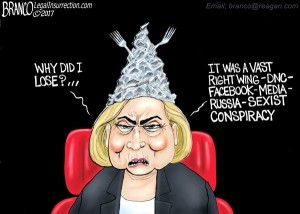 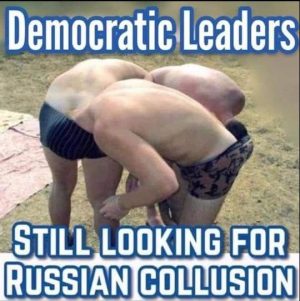 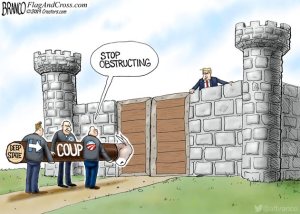 This site is my opinion only and is unpaid. I am a retired Paramedic/Firefighter with 25 years of service in the City of Dallas Fire Dept. I have a B.A. degree in Journalism, and A.A. degrees in Military Science and History. I have spent my life studying military history, world history, American history, science, current events, and politics making me a qualified PhD, Senior Fellow of the Limbaugh Institute, and tenured Professor for Advanced Conservative Studies. 😄 It is my hope that readers can gain some knowledge and wisdom from my articles.
View all posts by dustyk103 →
This entry was posted in Democratic socialism, Elections 2020, Politics and tagged AG William Barr, Donald Trump, Mueller Report, Robert Mueller, Russian Collusion, Russian Collusion Delusion, Trump Obstruction. Bookmark the permalink.