Gaslighting: The act of manipulating a person by twisting the facts to convince them that what they know is false.

Democrat media is gaslighting their viewers declaring that the Obama regime was legitimately concerned about Russian influence in the election declaring that their attempts to put spies in the Trump campaign never happened.  Except they reported this fact over two years ago.  The Obama regime was not worried that Russian was actually colluding with Trump.  They were trying to plant evidence against Trump.  Now that their attempted coup has blown up in their faces, they are trying to gaslight their oblivious followers further saying that the Mueller Report proves collusion and obstruction when it says the opposite, and that Obama never spied on Trump or instituted this coup attempt.

“If you tell a lie big enough, often enough, it eventually becomes the truth.”

(In their efforts to flood media with leftist lies they are now posting Fox News clips on YouTube that are cut up and corrupted to keep people from hearing the truth.)

Gaslighting is a form of psychological manipulation that seeks to sow seeds of doubt in a targeted individual or in members of a targeted group, making them question their own memory, perception, and sanity. Using persistent denial, misdirection, contradiction, and lying, it attempts to destabilize the victim and delegitimize the victim’s belief.

“Barr knows more than they [Democrats] do because they only know half the story, and the half the story they know is a lie.” – Rush Limbaugh

Highlights from Barr’s Spectacular Testimony, Which Made Democrat Heads Explode

Leftist media is flooding the zone in an effort to delude their liberal dupes into believing that Obama didn’t criminally spy on the Trump campaign and that the coup they have been staging for the last two years didn’t happen.  They are slandering AG Barr as a pathological liar for Trump denying that Trump colluded with Russia and obstructed justice.  This they do despite the Mueller Report they spent two years witch-hunting through a microscopic anal probe of Trump’s life turning up nothing by which they can even infer a crime of any sort.  Only the most irrational, dysfunctional, and ignorant will believe them and America will be surprised at how large a portion of the population fits into that category.

Democrats says it is Republicans who are gaslighting people, that Republicans are pathological liars.  As the pathological liars that Democrats are, this is the primary defense of the pathological liar to smear the truth speaker as the liar.  Only the educated who have a moral compass and a rational mind can wade through the smoke and static of leftist deception.  The numerous efforts by Democrats to gaslight the people through propaganda, creative editing, misrepresentation of the facts, and warping the minds of the oblivious has paid off in corrupting the thinking of some 40% of Americans.  Their goal is to discredit Barr in the minds of their minions to dismiss the truths he is going to reveal about the Obama regime.

Meanwhile, at MSNBC’s insanity room, Hillary Clinton is still living the lie of Russian collusion.  She even made her own joke about asking China to find Trump’s tax returns.  This may be so funny to witless liberals who don’t understand that the IRS has Trump’s tax returns.  They also don’t understand the simple fact that it was Hillary who engaged in Russian collusion, was paid off by Russian oligarchs, and funded all the lies of the Steele Dossier that formed the basis of Obama’s communist spy campaign and the ensuing attempted coup.

The DNC vs. the GOP

The Democratic National-socialist Communists versus the Grand Old Party of Lincoln and Jefferson deliberately confuse facts and history to dupe ignorant young minds to promote liberal communism.  Their corruption of history includes;

For the party of perversion to slander Trump as a molester over a statement they take out of context is the typical self-righteous hypocrisy of leftism.  They say Obama didn’t spy on Trump because he was trying to plant spies on Carter Page who just coincidentally happened to be in the Trump campaign. 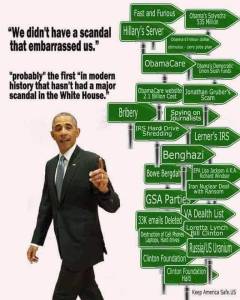 They say when Trump jokingly asked Russia to find Hillary’s emails they immediately tried to hack her even though Hillary had destroyed her servers over a year before.  They say Russians hacked the DNC servers to reveal Podesta’s emails through WikiLeaks, but Assange says he got the emails through a phishing scam for which Podesta fell.  Moslem techs who tried to flee the country were discovered to have stolen Democrat classified data and the media has kept that silent.

Democrats say they were trying to protect America from Russian and Chinese spies.  Though they immediately notified Di-Fi of the Chinese spy they discovered she employed for twenty years, they didn’t inform Trump of any Russian attempts to infiltrate his campaign.  That’s because they were trying to plant an Obama agent in their ranks to create collusion by which to frame him.  Thank God they failed.  America has been in utter turmoil since stupidly electing a Moslem communist to be president.

America’s Decline due to Communist Infiltration

The assassination of JFK by LBJ began America’s descent into the corruption of the Democratic Party into the Democratic National-socialist Communist Party.  Leftists try to misinform students into believing that Communism is far left, and Nazism is far right, and that they are centrists.  The true paradigm of politics is that all of the totalitarian socialists consisting of Communists, Nazis, Fascists, and Islamists are far left.  LBJ eliminated Kennedy who tried to make America better by reducing Democrat’s confiscatory taxes and rooting out corruption, and they killed him for it.

LBJ corrupted the Civil Rights movement for which Republicans voted to make it into a Democrat giveaway program creating welfare queens destroying the black family unit.  They use this to buy votes from the greedy poor by promising to punish the rich and promote criminality saying that prison is racist.  They glorify criminals to blacks to corrupt them into becoming criminals so that they can incarcerate them.  Democrats have always been anti-black even though they now portray themselves as anti-white.  It is still white men leading the party.

Obama became the face of the Democrats in forcing leftist ideology on the nation and the world.  This communist corruption is what has caused the great decline of American morality.  It is taught in schools by fanatic leftists who gaslight young minds with false history and misrepresentation of the facts that creatures of Obama’s ilk learned growing up. 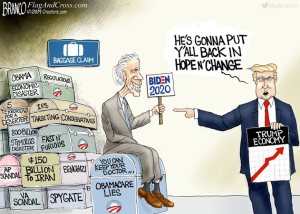 The smearing and removal of Nixon as being a horrible criminal, who couldn’t hold a candle to LBJ, is the basis for their smears and slanders of Republicans.

Jimmy Carter continued their efforts in bringing down America’s economy.  The great Ronald Reagan led America into recovery while Democrats undermined him by increasing the National Debt through massive deficit spending.  The money they stole went to Democrat donors, unions, and other supporters who in turn funneled some of that money back into the DNC.  That technique continues through today and reached its pinnacle under Obama’s trillion-dollar deficits that he called ‘economic stimulus to save jobs’ and Hillary’s Clinton Foundation.

Democrats sabotaged the first Bush presidency convincing him to break his promise not to raise taxes.  Clinton’s botched attempt at subterfuge raising taxes further led to Republicans retaking Congress.  Democrats then tried to steal the 2000 election but failed.  They then redoubled their efforts in 2008 and deliberately crash the economy through their sub-prime mortgage scam they’d set up under Clinton.  They perpetrated this for years setting it up to blame Bush so they that, once they regained Congress through their lies, they could oust the Republican president.

Putting a Moslem socialist into the presidency was the greatest achievement of the Democratic National-socialist Communists.  Obama stole trillions of dollars in American wealth.  That money was funneled to DNC America haters and to the Muslim Brotherhood to finance the Islamic State to overthrow governments in the Middle East.  He forced the EU to import Islamo-nazis to rape and terrorize Europe while importing Latino-communists from South and Central America to corrupt the U.S. electorate.

President Trump is America’s last hope of turning the tide on those who would destroy America and unmake the Constitution to remake America into a socialist state like China, Russia, and Venezuela.  The birth pains of socialism always result in the people suffering through genocides. 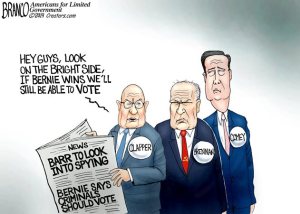 In China, only those most loyal to the government can prosper in their new capitalist cities.  Russia has only it’s oligarchs, and Venezuela is striving to throw off the yoke of socialist domination.  The Middle East was long ago brainwashed with Muhammadism.

The future of the world relies on the moral will and determination of a great man in Donald Trump.  Democrats will smear him, and anyone associated with him to the utmost of their ability.  They have been importing illegal aliens by the millions and giving the vote to these Latino-communists and felons to overthrow American citizen patriots.  Their media conceals their lies while misrepresenting the truth that Donald Trump, whom they declare guilty even after being proven innocent, is righteously investigating the crimes of Obama, Hillary, and the DNC.  They smear Barr to discredit the truth he will reveal through investigating their spying.  If these traitors to the Constitution are not brought to justice, then America will fall into darkness.

Democrats prove they are unable to learn from their mistakes

This site is my opinion only and is unpaid. I am a retired Paramedic/Firefighter with 25 years of service in the City of Dallas Fire Dept. I have a B.A. degree in Journalism, and A.A. degrees in Military Science and History. I have spent my life studying military history, world history, American history, science, current events, and politics making me a qualified PhD, Senior Fellow of the Limbaugh Institute, and tenured Professor Emeritus for Advanced Conservative Studies. 😄 It is my hope that readers can gain some knowledge and wisdom from my articles.
View all posts by dustyk103 →
This entry was posted in Democratic socialism, Elections 2020 and tagged AG William Barr, American Communism, Barr Investigating the investigators, Congressional Slander, Democrat Gaslighting, Donald Trump, Leftists Smear Truth, Media Gaslighting, Spying on Trump. Bookmark the permalink.