Taking Christ Out of Christianity 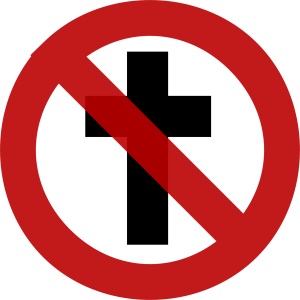 Jesus said, “Love those who do evil and bring them into the church.  Accept those who live immorally as your family.  Bless Satan and love him.”

Holy Cross drops Knight mascot over violence in the Crusades

No, He didn’t say anything remotely like that.  Only a leftist, who doesn’t have a moral compass or understand Christ’s teachings, would believe that doing what is wrong can be right.  Christian schools and others are being coerced to take Christ and Christian history out of their organizations.  Holy Cross school just dropped its mascot of a knight out of “white guilt” because it is associated with the Crusades that leftists declare were a “white privilege” attack against “peaceful Islam.”  Pastors have been known to invite Moslems into their church to pray to Allah as an act of compassion.  This is no different than inviting a Satanic cult to worship Satan at the Altar of Christ.  Islam teaches that God had no son and are as anti-Christian as satanic cults.  Giving them the church in which to pray is grinding the church under the boot of Islam.  People’s ignorance of Christianity and history is colossal.  The most basic perusal of history proves the lies of the Crusades to be the heinous propaganda of leftists who have their heads stuck where the sun don’t shine.  The Crusades were not an offensive war of conquest, but a defensive war to stop the advance of Islamists who had been warring against the West for over four centuries.  The Crusaders only went to the Holy Land of the Levant at the bequest of the Byzantine Emperor Alexius who called for troops to stand against the invasion of the Seljuk Turks.  Their mission was to regain the lands the Byzantines had lost to the Turkish onslaught in the previous ten years after Emperor Romanos was betrayed and captured at the Battle of Manzikert.  Islam has inflicted the Jihad on the world as a plague of war since its inception under Muhammad and his first conquest of Mecca.  The Spanish Inquisition was only brought about by the Catholics copying the way of Sharia after centuries of close contact with Moslems who had conquered and oppressed Spain.  Moslems call their conquests the “Golden Age of Islam,” when it was the Dark Age of mankind.  They blamed the Christians in Spain as being warmongers not willing to submit to Islam’s “righteous rulers” just as Democrats blame Republicans for the evils of Democrat policies.

Learning history is of paramount importance in understanding the past.  Liberals learn very little that results in their believing what little they are told.  This is why Alexander Pope said, “A little learning is a dangerous thing.”  This is how Blood Libel of the Jews has been spread.  The Knights Templar were demonized by a French king as secretly worshipping Satan and massacred because they had established the first banking system and he wanted to steal the wealth of the people stored in their temples.  Liberal teachers, such as the one that was just fired for expressing his utter disdain for people in the military as being too stupid to get other jobs (because he is an intellectual and moral midget), shouldn’t be teaching children.  They don’t instruct students to examine all the facts from all sides before reaching a conclusion, but indoctrinate them into their ideology by punishing rightful thought.  They use political correctness to censor debate and teach bigotry for what leftists despise, which is virtually everything that is righteous.  This is especially true for Christianity that teaches morality and ethics that they disparage by rejecting those morals as the product of worshipping a fantasy god from fairy tales in the Bible.  Good ethical morals are never wrong, but as in all things, liberals will attempt to destroy the message by mocking the messenger.  The Left has created a breach between secular education of science, history, and sociology and the moral teachings of the church with the sole intent of causing a deterioration of morality, and they have succeeded.  Without a proper moral understanding by which to judge history and understand science, people leap to erroneous conclusions on the basis of insufficient knowledge.  This is why a true education includes religion and philosophical debate so that people are not so easily duped by the junk science of liberal atheism and their worship of the Earth Mother Gaia.  When you take Christ out of the classroom you leave a vacuum into which the immoral can inflict their dysfunctional thinking to warp young minds allowing them to turn to other gods.  Liberals say they prefer atheism, but they worship Gaia through environmentalism, and they will just as readily accept the fascist socialism of Islam if they can achieve their ends to destroy Christianity and establish elitist rule.  That there are other gods whom people worship should be no surprise to a Christian or Jew as even God said in His First Commandment, “Thou shalt have no other gods before Me.”  Allah, Gaia, and Satan are three of those other gods and they are only adhered to through ignorance, hate, and immorality.

“Liberalism is born of ignorance and bred on immorality.” 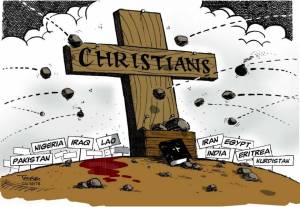 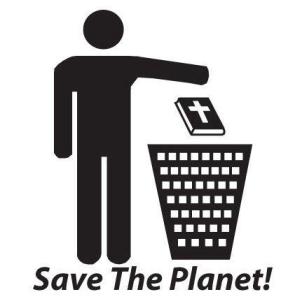 The Reader’s Digest version of Mohammad and Islam

How Liberal Contempt Slanders Everyone

This site is my opinion only and is unpaid. I am a retired Paramedic/Firefighter with 25 years of service in the City of Dallas Fire Dept. I have a B.A. degree in Journalism, and A.A. degrees in Military Science and History. I have spent my life studying military history, world history, American history, science, current events, and politics making me a qualified PhD, Senior Fellow of the Limbaugh Institute, and tenured Professor Emeritus for Advanced Conservative Studies. 😄 It is my hope that readers can gain some knowledge and wisdom from my articles.
View all posts by dustyk103 →
This entry was posted in Religion and tagged Anti-Christian Ideologies, Atheism, Christianity, Democrat corruption, Education, Islam, Leftist Deceptions, Liberalism, Separation of Church and State. Bookmark the permalink.