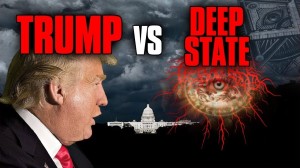 The FBI was sanctioned by Congress to operate as the nation’s premiere federal law enforcement agency.  The Director of the FBI answers to the DoJ, several congressional committees, and ultimately to the Commander-in-Chief.  But under Obama the FBI, like the IRS, was corrupted by Democrat operatives who refused to answer to anyone but the president as their sole autocrat.  This made them more the Gestapo than the FBI.  President Trump has the enormous task of not only making America great and safe again, but of rooting out the corruption that Democrats have infused into America’s government agencies.

To whom does the FBI answer?

What is the “Deep State?”  It is Obama’s Democrat operatives embedded in administrative positions throughout the government by which they can undermine Trump’s efforts on behalf of Republicans to undo the damage done by Obama’s socialist regime.  They are in all government agencies and have been caught operating on behalf of the Left to unmake America.  From the IRS targeting conservative groups to the CPA inflicting regulations on conservative companies to the FBI digging into the doings of Republicans while disrupting efforts to uncover Democrat duplicity.  In a nutshell it is Democrat’s secret service agents undermining and sabotaging Americanism.  Chris Wallace described the Deep State as;

“That’s the notion that there’s an Obama shadow government embedded in the bureaucracy that is working against this new president. I think some folks are gonna think that’s right on and some folks will think it’s awfully conspiratorial.”

Liberals always mock the truth when their conspiracies are uncovered.  Since they’re actions have been found out and exposed, like Lois Lerner in the IRS and Andrew McCabe in the FBI, the only people who deny its existence are the leftists that created it.  Leftists hate law enforcement that catches them committing crimes and corruption, but they love them when they are the militant arm of their regime punishing their opponents.  The Democrat media, the propaganda arm of the Democrat Party, likewise slander cops as pigs if they shoot criminals, especially as racists if they’re black, but then denounce Republicans as cop haters who are slandering the FBI because they expose leftist corruption within that organization.  These are the same people who lampoon Trump as a buffoon unable to tie his own shoes or keep his hands off of women, while at the same time credit him with being a nefarious genius who stole the election.  They’re insane, literally, and they display their insanity in their two-faced memes that cannot possibly both be true.  The difference between a true Democrat and a true Republican is that Democrats believe the masses should be ruled, while Republicans believe the people should be served.  It is only the RINOs who work with Democrats who also pander, demagogue, and coerce people by force of government that work with those who would be rulers.  They are the reason liberals cast blame on both sides, while conservatives know and understand better.

More nefarious than the alliance between Democrats and the liberal media is their alliance with social media to indoctrinate the public by hiding conservative Republican publications on the Internet.  Google and Facebook have both been exposed as extremely guilty of censoring conservatives under the guise of being blocking content that they say is “offensive” or “hateful.”  The only thing offensive and hateful about them is that they tell the truth, which liberals find offensive and hate to have people hear because it exposes them as the frauds they are.  If a Democrat declares that anyone is of such exemplary character that they are above reproach like Mueller and Comey then you can be absolutely certain that that person is a lying POS!  This isn’t even close to being a case of putting lipstick on a pig, but more like crowning a demon with a golden halo and calling it pure.  Electing a Moslem socialist to be president was the gravest mistake the people of America ever made.  Islam has been at war with the world since Muhammad’s inception and deception is key to spreading this death cult.  Accepting Moslems into America has led to a multitude of terrorist attacks in the last forty years with those attacks on steroids under Obama.  Democrats have become the party of foreigners intent on destroying America and domestic haters who ally with them.  Nothing good will come of their subterfuge and subversion.

The truest proof that the Left is absolutely two-faced, dysfunctional, and perverted is in the identical legal actions of Obama and Trump in which they declare Trump to be committing a heinous crime betraying his office, while when their messiah was doing it they lauded him as brilliant, ingenious, and insightful.  When Obama called Putin to congratulate him on winning re-election they acclaimed his diplomacy, but when Trump does it they denounce him as a traitor.  They even praised Obama’s corruption and criminal acts as legitimate in an effort to provide him cover, and again declare everything that Trump is doing that is both legal and legitimate as violations of the Constitution they never read.  Born Americans who adhere to Democrats do so mostly through ignorance of what Democrats have been in the past and what they have become.  They started out in America as the slavers and, after Republicans took their slaves away, have morphed into the deceivers subverting the Constitution to dupe the ignorant.  They are the America haters who want to fundamentally transform America from a constitutional republic into a totalitarian socialist toilet.  The only way they can do this is through indoctrinating the young to not listen to the truth or think critically to morally compare right and wrong.  The latest proof of the two-faced hatred by the Left is their kerfuffle over their darling Zuckerberg’s Facebook.  Zuckerberg was wonderful so long as he endorsed Obama and gave him subscriber data for his campaign making Obama a genius.  Now that Trump is doing the same thing the Left is calling it a crime and setting out to destroy Zuckerberg.  There was no “data breach” of privacy at Facebook.  They did what everyone does and ask people to share their friends list when they signed up with their page.  Socialists always criminalize what is legal when a conservative Republicans does it.  When they get the power they crave they always criminalize righteous moral thought.  Everything the Left does is to tyrannize others, control people, and slander the righteous.  Businesses that get in bed with Democrats thinking they will be inoculated against their wrath do so at their own risk.  Allying with Democrats is like allying with the Mob.  Serve them and you’re allowed to survive.  Cross them, even accidentally, and you’re dead meat.  This is why the Left owns Communism, Nazism, Islamism, and all the hate and bigotry in the world, and why they advocate for criminals and corruption.  The only way evil survives is by operating in the shadows and, if exposed, blaming others.

Obama operatives a danger to America

Mueller and McCabe cover up

This site is my opinion only and is unpaid. I am a retired Paramedic/Firefighter with 25 years of service in the City of Dallas Fire Dept. I have a B.A. degree in Journalism, and A.A. degrees in Military Science and History. I have spent my life studying military history, world history, American history, science, current events, and politics making me a qualified PhD, Senior Fellow of the Limbaugh Institute, and tenured Professor for Advanced Conservative Studies. 😄 It is my hope that readers can gain some knowledge and wisdom from my articles.
View all posts by dustyk103 →
This entry was posted in Obama's legacy, Politics and tagged Antifa Nazis, Barack Obama, BLM Criminals, Deep State, Democrat propaganda, Democrats Deep State, Donald Trump, FBI Deep State, Leftist corruption, Liberal Fascism, Obama's Deep State Corruption, Obama's shadow government. Bookmark the permalink.

1 Response to Obama’s Deep State Corruption of the FBI