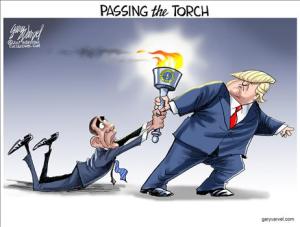 Leftarts circle the wagons and cry foul at Trump when he shuts out CNN for disseminating fake news as Obama strives to keep Trump pinned down.

As Obama sabotages America to thwart Trump’s efforts to recover from the damage America’s Moslem president has done, CNN published information they say was “carefully sourced,” but their source was Buzzfeed that published a fake story.  The MSM has proven beyond doubt to be the propaganda arm of the Democrat Party.  But President Trump will not abide liars and treachery in his administration.

On the O’Reilly Factor Geraldo Rivera did his utmost to push every liberal lie about their twisted interpretation of the facts, but Bill and Eric Bolling shut him down.  Like BO, Meryl Streep, and their media sycophants, Rivera would rather believe the lies than admit the truth.  This is the fundamental characteristic difference between the Right and Left that liberals will not tolerate the truth while conservatives will not tolerate lies. 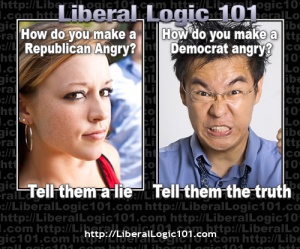 Following Obama’s farewell speech, to which no one paid any attention, they fell all over themselves in display reminiscent of North Koreans balling over the death of Kim Jong Il.  The Mainstream Media are such base sycophants that when Obama squats they will lay down under him and open their mouths.  This sycophancy of a megalomaniac who had himself awarded a medal before leaving office, after stabbing America and her allies in the back repeatedly during his last days, is why the public has no trust in the MSM. 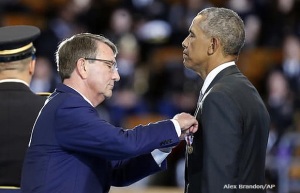 Democrats and the Leftarts media continues to live in the dysfunctional dystopian world of Obama with their belief that healthcare didn’t exist before ObamaCare and that Americans will get sick and die in the streets without it.  This additional tax producing a redundant entitlement that Medicaid already covered, stealing money from seniors who worked their whole lives paying into Medicare, is as false a credo as their man-made global warming scam and their braying about Islam being a religion of peace.  The Left has reduced American power both economically and militarily, empowered our enemies treacherously with Obama sending Iran enough uranium to build ten nukes in addition to releasing their funds to build nuclear weapons, disrupted our society with BLM criminals assassinating police and inflicting the atheist gay agenda on the people to harm Christianity, and encouraging invaders to not only take American jobs but to force Islamic Sharia on the Land of the Free. 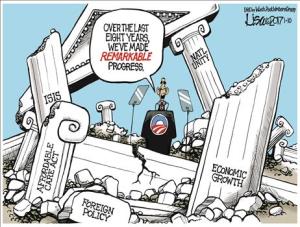 The “Elite” Meryl Streep Disgusted with Us “Little Deplorables”

The Blood of Ft. Lauderdale Terror Attack Victims is on Obama’s Hands

This site is my opinion only and is unpaid. I am a retired Paramedic/Firefighter with 25 years of service in the City of Dallas Fire Dept. I have a B.A. degree in Journalism, and A.A. degrees in Military Science and History. I have spent my life studying military history, world history, American history, science, current events, and politics making me a qualified PhD, Senior Fellow of the Limbaugh Institute, and tenured Professor for Advanced Conservative Studies. 😄 It is my hope that readers can gain some knowledge and wisdom from my articles.
View all posts by dustyk103 →
This entry was posted in Politics and tagged Barack Obama, Donald Trump, Leftist media propaganda, Liberal Media Bias, Mainstream Media. Bookmark the permalink.