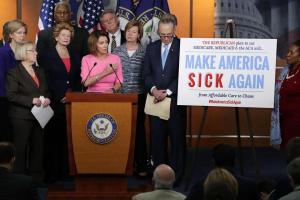 Chuck Schumer (D-NY) is the new leader of the Democrat Congress and one of Obama’s chief generals of his shadow government to conduct black ops against Republicans.  Schumer called a press conference to claim that Trump is going to eradicate Medicare and Medicaid along with ObamaCare.  Since Democrats already created ObamaCare to do the job Medicaid was already doing so they could charge Americans extra taxes, and they stripped away $700B from Medicare seniors to provide for ObamaCare deadbeats, PE Trump rightfully tweeted that Schumer is an a**clown for demagoguing that Republicans are the ones who would take away people’s healthcare.  What he will do is take away Democrat’s ObamaCare taxes and give financial relief to the millions of people forced into ObamaCare whose premiums have gone up by 100-600%.

Everyone who isn’t an oblivious Democrat fool knows that ObamaCare was a lie from the start designed only to wreck the health insurance industry and force people to turn to government for a solution.  90% of the people on ObamaCare had insurance previously and the other ten percent are deadbeats who don’t pay for it anyway.  Of the 46 million uninsured people Obama claimed would have coverage there are still 40 million without, but 30 million people lost the insurance they had and were forced into ObamaCare.  These are the people Republicans are concerned must have a program to cover them until they can transfer to coverage like they used to have that was affordable for them and provided the coverage they wanted.

The Leftarts usual scare tactics that Republicans want everyone to die is all they have to tell their brainless followers who run like Lemmings over the Democrat cliff.  Having government in control of healthcare is an invitation to Leftarts Death Panels which were built in to ObamaCare to keep end of life costs from becoming a burden.  Instead, they burden the young and healthy to provide care for those who don’t work but do vote Democrat – except that the young can’t find jobs because Democrats have taxed the wealth away from companies so they can’t grow.  Obama promised to create jobs for them, but all he did was milk them and their grandchildren of $10T and put them into debt slavery for life.  Schumer says Republicans are clowning around with people’s healthcare.  Obamaites (Obama parasites) and his black government are clowning around with America’s future as all they offer is more debt, less prosperity, and fighting against Trump doing anything to make America great again.  If understanding what Democrats are doing doesn’t make you sick then wait till you get the bill.

The Seven Lies Liberals Tell Themselves to Sleep at Night

Flushing Obama’s legacy down the toilet

This site is my opinion only and is unpaid. I am a retired Paramedic/Firefighter with 25 years of service in the City of Dallas Fire Dept. I have a B.A. degree in Journalism, and A.A. degrees in Military Science and History. I have spent my life studying military history, world history, American history, science, current events, and politics making me a qualified PhD, Senior Fellow of the Limbaugh Institute, and tenured Professor Emeritus for Advanced Conservative Studies. 😄 It is my hope that readers can gain some knowledge and wisdom from my articles.
View all posts by dustyk103 →
This entry was posted in Politics and tagged Democrat propaganda, Democrats, LEFTARTS, Leftist war on America, Medicaid, Medicare, ObamaCare, ObamaCare taxes, Repeal ObamaCare. Bookmark the permalink.