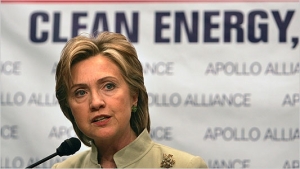 Hillary vows to complete Obama’s agenda to kill coal, while Obama’s national security advisor informs the media that the Iran nuclear deal was a lie.

It’s called hubris Mr. President.  It’s sinful pride wherein people who are so prideful they think they can tell people to their faces that they lied and still get away with it.  Apparently, he is right and his arrogance is not tempered by his conscience, but emboldened by the stupidity of the voters.

Obama’s national security adviser gave a press conference in which he admitted that the entire nuclear deal with the Iran is a fraud and that they created a media echo chamber to put one over on the American people.  This is hardly the only fraud the Democrats up and putting over on America for the last century;

Obama and his ilk are so arrogant and so confident as to believe that they can admit their lying schemes to the people’s faces and that there is nothing the people can do about it.  When he was running for president in 2008, Obama admitted that he would bankrupt the coal industry and shut down our electricity.  This reveal was so damning that the reporters who recorded this statement hid it until a week before the election assuming no one would hear it in time to change their votes – and they were right.

Now Hillary is telling coal miners to their faces that she is going to put them out of work that their families have done for centuries and give them green jobs.  She believes that voters will fall for this as easily as they fell for Obama’s scams.  Americans weaned themselves off of Arab oil.  Now Democrats want to wean them off of American coal for the electric cars they forced car companies to make.

This is the ultimate hubris.  But what is hubris when it is compounded by the stupidity of Democrat voters?  They believe capitalism, tax cuts, and Republicans are responsible for the decline in America’s economy over the past ten years while Democrats have been in complete control.  The crash of Fannie Mae and Freddie Mac was engineered by Democrats, but McCain was too stupid to point that out to voters and tell them how Democrats stopped Republicans from reforming those banks in 2003 when they foresaw that crash.

Democrats have little to fear this upcoming election because they can count on the ignorance of the average voter.  Compound that with the anti-American vote, the criminal vote, the illegal immigrant vote, plus the dead people vote and multiple votes and they may have the election already in the bag.  That is why they can feel so confident that they can stand in front of microphones and TV cameras and tell us they lied right to our faces and still expect to be re-elected in November.

Cutting through all the noise on Trump vs. Clinton

“This lesser of two evils thing doesn’t even apply, because nobody gets close to the depths of incompetence and depravity and danger posed by another four years of the same crap that we’ve had the last seven and a half.

“A third party you’re not going to win anything.  You’re gonna guarantee that what you don’t want ends up victorious.”

Can Trump unite a divided America?

The morality of choosing not to support Trump

Liberals only use 10% of their brains

The Eagle and the Snake – America’s war with Islam

This site is my opinion only and is unpaid. I am a retired Paramedic/Firefighter with 25 years of service in the City of Dallas Fire Dept. I have a B.A. degree in Journalism, and A.A. degrees in Military Science and History. I have spent my life studying military history, world history, American history, science, current events, and politics making me a qualified PhD, Senior Fellow of the Limbaugh Institute, and tenured Professor Emeritus for Advanced Conservative Studies. 😄 It is my hope that readers can gain some knowledge and wisdom from my articles.
View all posts by dustyk103 →
This entry was posted in Election 2016, Obama's legacy and tagged America's economy, Barack Obama, Coal, Coal miners lose jobs, Democrat agenda to kill coal and oil, Democrat propaganda, Democrats crash the economy, Elections 2016, Hillary Clinton, Iran nuclear deal false, National Security, Obama Hillary frauds. Bookmark the permalink.