The Eagle and the Snake – America’s war with Islam 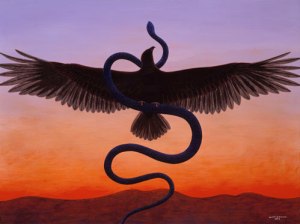 If America does not lead the fight against the spread of the evil that is Islam then who will?  Leftists say that only haters reject Islam.  Jesus never said that we must love evil.

America has fought against Islamists from its first days as a nation.  Before that, Europeans had been fighting against the onslaught of Islam for centuries.  Since the first Moslem fanatics emerged from Arabia they have brought war, slavery, and oppression everywhere they go.  To those who know history the religion of peace and tolerance is anything but.

From the Barbary Pirates to the Moros in the Philippines to the Grand Mufti allied with the Nazis in WWII to the Gulf War, Al-Qaeda, and ISIS, America has been fighting wars with Islamists its entire existence and before.  Europeans staved off invasions by the Moslem fanatics of both Arabs and Turks for centuries.  Spain spent eight hundred years pushing her Moslem conquerors out of their nation, and now leftist fools are inviting them back to make their homes amongst them.

Leftists inviting Moslems into their homes are being treated to Islamism.  In Europe, “refugees” are gang-raping European women because they go out in the street alone.  This is not allowed in Islam.  In American schools they are demanding Halal food be served and pork removed from American menus.  Any who do not comply with their demands are declared to be insulting Islam and this gives Islamists their excuse to declare Jihad and wage “holy war” on infidels.

Moslems make demands of their hosts or threaten retaliation

America has fought oppression and slavery from its beginning even to the point of fighting the War Between the States to abolish slavery by southern Democrats.  She liberated Europe from the Nazis and the Chinese from Imperial Japan, and after that she spent fifty years beating down the Iron Curtain of Communist Russia that enslaved Eastern Europe.  She has done the same for numerous small nations in which totalitarians have striven to gain control along with spending hundreds of billions in financial aid.  She has not always been successful when the people of those nations were deluded to believe that the snakes they invited to be their government would help them, e.g. Cuba, Venezuela, and others.

But the past seven years has seen the expansion of Islam because a son of Islam fooled sixty million Americans into believing he would work to make America better.  Instead the Indonesian bred Moslem has unleashed the Jihad on the world, supporting the Muslim Brotherhood in overthrowing governments that kept jihadis in check, and strong-arming America’s allies to allow Moslems into their homes.  In addition, he has weakened America’s military and economy so that she is no longer the power force for good in the world.  The snake is in America and it is not just a snake, but a hydra with many heads and many more ready to spring up to take the place of those removed.  The only way to kill a hydra is to cut out its heart.

Jihad is the product of the foundation of Islam as taught by Muhammad.  They infiltrate other cultures by claiming to be a religion of peace, and when they begin to reveal themselves making demands on those cultures to change to Islam they claim victim status when those cultures reject them.  A religion that teaches its followers that dying while murdering rewards jihadis in Paradise in the Afterlife, that brainwashing them by forcing them to pray together five times a day from infancy, is not a religion at all.  It is a death cult whose objective is not to bring humanity hope, but to destroy civilization and devolve mankind into savagery and slavery to their theocratic elites.

Jihadi terrorism and the failure of presidential candidates and the West

[Author’s note: liberals like George Clooney prove what Churchill said, that if you’re over thirty and a liberal you have no brain.  Having a high IQ without the knowledge or moral compass is like having a supercomputer with an empty hard drive and defective programming.  Dysfunctional liberal thinking that blames the victim rather than the perpetrator is what results in their believing it is those who stand against the evil of Islam who are to blame for the evil of Islam.

Leftists live, eat, and breathe dysfunctional moral relevancy.  Just as they blame Republicans for the economic destruction visited on America by Democrats, they blame Christians for resisting Islam.  When liberals interpret what Jesus said in the Bible about “turning the other cheek” they think that is the same as saying if someone rapes your wife give to him your daughter, or if someone murders your brother give to him your son.  The righteous response to being attacked by those who would destroy you is not love and forgiveness, it is destroying them before they can destroy others.  Love and forgiveness is what you teach your children so they don’t grow up to be those kinds of people.]

The Eagle and the Snake – America’s war with Islam, pt. II

Muhammad the First Terrorist and his religion of self-imposed brainwashing

This site is my opinion only and is unpaid. I am a retired Paramedic/Firefighter with 25 years of service in the City of Dallas Fire Dept. I have a B.A. degree in Journalism, and A.A. degrees in Military Science and History. I have spent my life studying military history, world history, American history, science, current events, and politics making me a qualified PhD, Senior Fellow of the Limbaugh Institute, and tenured Professor for Advanced Conservative Studies. 😄 It is my hope that readers can gain some knowledge and wisdom from my articles.
View all posts by dustyk103 →
This entry was posted in Election 2016, Islamism and tagged 2016 Democrat presidential candidate, 2016 Republican Presidential candidate, Al-Qaeda, Barack Obama, Bernie Sanders, Donald Trump, Elections 2016, Hamas, Hezbollah, Hillary Clinton, Iran, Iraq, ISIS, Islam, Islamic death cult, Islamic terrorism, Islamists, Jihad, John Kasich, Middle East, Muhammad the Prophet, PLO, Radical Islam, Ted Cruz. Bookmark the permalink.