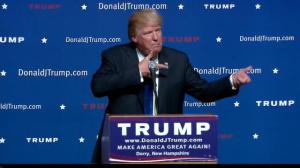 Donald Trump reflects the sentiment of every America patriot about how Bowe Bergdahl, charged with desertion, should be treated.  Bergdahl’s lawyer wants to sue Trump for “defamation.”

If you don’t know that Bergdahl has been reported by his platoon mates a deserter who left his post in Afghanistan to join the Taliban, you might be a liberal.  If you don’t know that six soldiers were killed looking for him thinking he had been kidnapped by terrorists, you might be a liberal.  If you think Bergdahl was captured against his will and that five years later Obama traded five top Taliban leaders for his repatriation and cheered for him, you are a liberal.

This week, leading Republican presidential candidate, Donald Trump, said that in the old days Bergdahl would have been shot for treason.  Because Bergdahl has not yet been tried and convicted due to interference by Obama, who is holding up his trial like he did with the Ft. Worth Moslem terrorist who shot four dozen soldiers, Bergdahl’s lawyer believes he can sue Trump for slander and defamation.  This is how corrupt our legal system has become and it has gotten exponentially worse under this shyster that sixty million people elected to be president who routinely breaks America’s laws – such as allowing migrants to invade the country, and make personal, illegal deals with our enemies.

Slander is telling a lie about someone in public.  It is what Democrats passed a law to make legal for them to do on the Senate floor.  Defamation is what Hollywood stars do to businessmen saying they steal money from the poor to make themselves wealthy, while they make multi-million dollar salaries for “working” a few weeks a year, while the crews make a few thousand dollars with no job security.

Bergdahl will eventually be tried and hanged for High Treason.  Bergdahl’s lawyer should share his fate for threatening patriotic Americans who condemn his treason.  Obama should share their fate as well for all the assistance he has given to the Muslim Brotherhood making them the ruling power in the Middle East, and for embezzling trillions in taxpayer dollars to give to his cronies.  The man who said Republicans make common cause with America hating Iranians continues to make deals with America’s enemies to the benefit of Islamists.

This site is my opinion only and is unpaid. I am a retired Paramedic/Firefighter with 25 years of service in the City of Dallas Fire Dept. I have a B.A. degree in Journalism, and A.A. degrees in Military Science and History. I have spent my life studying military history, world history, American history, science, current events, and politics making me a qualified PhD, Senior Fellow of the Limbaugh Institute, and tenured Professor Emeritus for Advanced Conservative Studies. 😄 It is my hope that readers can gain some knowledge and wisdom from my articles.
View all posts by dustyk103 →
This entry was posted in Election 2016 and tagged Barack Obama, Bergdahl desertion trial, Bowe Bergdahl, Democrats, Donald Trump, Law, Legal System, Liberalism, Military Law, Treason. Bookmark the permalink.