There are three factions in the DNC – Deceivers, Numbskulls, and Communists 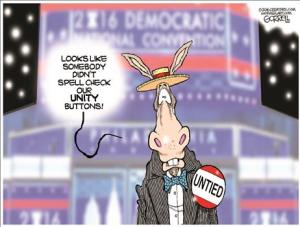 The Democratic Convention is in chaos, but don’t expect the liberal media to tell you about it.

Michelle Obama says, “Don’t let anyone tell you this country isn’t great.”  Eight years ago she said she was never proud of this country until Barack was nominated to run for president!  But then the deceiver says Democrats must bring jobs back to West Virginia and Pennsylvania [where Obama destroyed coal mining] and stop the racism [that they promote.]

Then there are the numbskulls who believe all the rainbows and lollipop speeches, but who pay no more attention to the substance of these speeches than they do to the actions and results of Democrat policies.  The communist faction of the party is all up in Bernie’s grill for not standing up against Hillary stealing the primaries.  America has never been great, they say, but they believe it would be if it became the totalitarian dictatorship Obama and Bernie Sanders have promised because they never learned jack about the socialists of the 20th century.

The Democrat Convention hall speaks for itself that this is an orgy of America hate by the anti-American party.  Not one American flag is in evidence inside, but you can find the American flag being burned outside, while the flags of America’s enemies are everywhere!  There is no red, which is fitting as Democrats are the party of the deeply depressed.  None of them will campaign as the radical leftists that they are, but campaign as conservatives while smearing Republicans.  Elizabeth Warren calls Trump and the Republicans stupid, greedy, satanic racists, but there is no mention of Islamic terrorism, black crime, or murdered police.  Instead they say Obama has brought about world peace while white racist cops are lynching innocent black boys.

The list of those who vote and support the Democrat Party is a list of everyone who hates America, hates capitalism, and hates freedom.  It is a list of everyone who believes government should rule as an authoritarian dictatorship that punishes their enemies – who happen to be their fellow Americans.  When asked about Trump’s “America First” slogan, Democrat’s answer is that Hillary is “Us first.”  Democrats are the party of the ultimate “hurray for us and f*** everyone else,” and then they say that Republicans are the ones who are screwing everyone else.  D’Souza’s movie reveals the history of the Democrats as the history of criminals, liars, and fools who have duped the masses to believe their dystopia is utopia.

“Hillary’s America: The Secret History of the Democratic Party”

This is no secret.  It is simple history of which 21st century Democrats are completely ignorant.  The uneducated masses cheer as the great unwashed worshipping their idols.

[Author’s note: When I was young and ignorant I lived in Georgia and voted for Carter twice!  I thank God every day that I was still a citizen of New Jersey voting absentee and my state had older, wiser people who chose Reagan thereby nullifying my vote.  Since learning what Democrats are I tell people, “If you don’t like your Republicans then get involved in the primary process and elect better Republicans.  Don’t be stupid and jump out of the frying pan into the fire by choosing the Democrats who made this mess.  Just get rid of the Republicans who would rather work with them than for the people.”  Corrupt politicians always lead to more corrupt politicians unless you are eternally vigilant, and the lack of vigilance is what has led to Democrats completely duping the American people.  Dinesh D’Souza did a superb job in making “Hillary’s America” and illuminating the Democrat party.]

“Politicians are all words and no actions.”

[or, in the case of Democrats, hopeful words and opposite actions.]

America’s next civil war, like WWIII, is already beginning

This site is my opinion only and is unpaid. I am a retired Paramedic/Firefighter with 25 years of service in the City of Dallas Fire Dept. I have a B.A. degree in Journalism, and A.A. degrees in Military Science and History. I have spent my life studying military history, world history, American history, science, current events, and politics making me a qualified PhD, Senior Fellow of the Limbaugh Institute, and tenured Professor for Advanced Conservative Studies. 😄 It is my hope that readers can gain some knowledge and wisdom from my articles.
View all posts by dustyk103 →
This entry was posted in Election 2016 and tagged Democrat agenda, Democrat Party, Democratic Convention, Hillary Clinton, Hillary's America. Bookmark the permalink.

3 Responses to There are three factions in the DNC – Deceivers, Numbskulls, and Communists