Sharia has no protection under the 1st Amendment

The 1st Amendment protects freedom of the press, free speech, and freedom of religion from government.  When it comes to anti-American speech you can say it all you want.  But when you start promoting the overthrow of the government that protection ends and you enter into the sedition.

Former Republican Speaker of the House Newt Gingrich is calling for all Moslems in America who believe in establishing Sharia law over the Constitution must be deported.  Obama says, “That’s not who we are,” and cites the 1st Amendment of the Constitution as protection for any religion and their practices in the United States.  Since when can any religion practice freely in America regardless of how barbaric it may be?

Satanism is not permitted to be freely practiced in America.  Infant sacrifice is considered murder and not allowed – (or perhaps it is legal since you can not only kill a baby in the womb, but kill the baby even when gestated long enough to live outside the womb, and Obama has even made it legal to kill a baby born alive from a botched abortion attempt.  But I digress.)

Islam and Sharia are not compatible with Christianity and the Constitution to the extent that one cannot live alongside the other in peace.  Sharia calls for the subjugation and enslavement of infidels to either submit to Islam or pay a tax to practice their religion.  It forbids the building of any place of worship other than mosques and declines punishment for the killing of Christians or the destruction of their holy sites.

Newt Gingrich is 1000% correct that Islam has no place in the free world.  Allowing those who would murder and enslave us to move into our homes and take our land is NOT who we are!  Barack Hussein Obama, aka Barry Sotero, Moslem, is NOT who we are, but he would make us into what he is – an Islamist dictator. 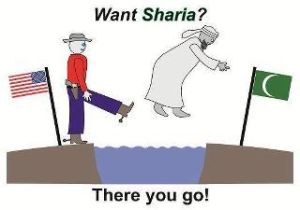 These people are not Americans, but foreigners seeking to carve out their own country within our nation.  Black Panthers and the Nation of Islam are two black groups trying to do the same thing demanding five southern states be made their black kingdom.  Mexicans are doing the same out west demanding California be returned to Mexico (which may be a viable alternative to the left coast home of liberal Follywood stupidity.)

White people have fought for decades to integrate blacks and immigrant Hispanics into society and some have been successful.  But most do not want to be part of America, but want to steal away a piece of it.  This is how Islam has infiltrated other nations when they cannot overcome them militarily and start insurrections from within.  The Democrats who work with them are betraying the country and all Americans in favor of haters in order to establish themselves as the undisputed rulers of the land.

The 1st Amendment may protect your right to say you would like a tyrannical government to enslave the people, but it does not protect your right to take actions to do so.  Just as Communists, Nazis, and Fascists have no right to organize to overthrow the American government, neither do Islamists.  That is the difference between the Left that fights to enslave the people and the Right that fights for their liberty! 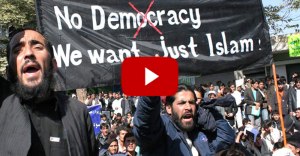 Islamists coming into the West are not immigrants, but an insurgency

GIVE TRUMP A CHANCE!

Fauxcahontas and Hillary’s havoc and lies

This site is my opinion only and is unpaid. I am a retired Paramedic/Firefighter with 25 years of service in the City of Dallas Fire Dept. I have a B.A. degree in Journalism, and A.A. degrees in Military Science and History. I have spent my life studying military history, world history, American history, science, current events, and politics making me a qualified PhD, Senior Fellow of the Limbaugh Institute, and tenured Professor Emeritus for Advanced Conservative Studies. 😄 It is my hope that readers can gain some knowledge and wisdom from my articles.
View all posts by dustyk103 →
This entry was posted in Election 2016, Islamism, Obama's legacy and tagged 2016 Presidential Campaign, America, Barack Obama, Constitution, Elections 2016, Islam, Islamist insurrection, Jihad, Jihad in America, Liberty vs. Slavery, Right vs. Left, Sharia. Bookmark the permalink.

1 Response to Sharia has no protection under the 1st Amendment