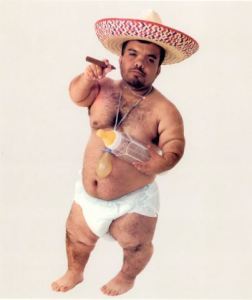 So, if someone broke into your house and popped out a baby on the floor, does that then make them a member of your family?

Democrats have taken the 14th Amendment and corrupted America by making the children any foreign gives birth to while on U.S. soil a citizen, and giving the vote to every deadbeat and America hater.

The difference between immigrants and illegal immigrants (more properly termed “invaders”) is this;

An immigrant is someone you welcome into your home who lives and works with your family.  They work with you to make your home a better place.  They love you, your home, and respect your values.

An illegal immigrant is someone who breaks into your home and squats there.  They steal what they can and take it away to their own people elsewhere.  They detest you, your home, and spit on your values.

Giving citizenship to the children of people who sneaked into America is no different than making a child born to a thief who broke into your home a member of your family.

Since Democrats acquired power in the debacle that was the 1912 election, they have corrupted American politics and society.  The amendment Republicans meant to be used to stop Democrats from denying citizen’s rights to their former black slaves has been twisted into a bludgeon used to corrupt America.  In the 1960s, Martin Luther King, Jr. was shocked at how black culture had deteriorated and the out of wedlock birthrate among blacks had risen from 8% to 25%.

Fifty years after King that birthrate has tripled again to 75% because black culture has turned completely away from Christianity and embraced the ideologies of the Left, first atheist socialism, and now violent Islamism.  They glorify criminals and ask Democrats to make laws to protect them from those who enforce the law and the citizens who are their victims.  The corruption of America is reaching a tipping point.

These past decades has not only seen the deterioration of American culture and black culture’s embrace of criminality, but a tidal wave of invaders from south of the border, and now an influx of people with the most vile, oppressive ideology on the planet.  Both Mexicans and South Americans invading the USA for jobs and a chance to make a living are not only being given those jobs, Democrats are giving them citizen’s benefits like Social Security into which seniors paid but illegal immigrants did not.  Not only that, but they are demanding America become part of Mexico and adopt their socialist dictatorship as their culture!

How insane is that?  They leave their sh*thole countries to come to America to prosper, and then they want to remake America into the socialist sh*thole they fled!  Worse still is the influx under Obama of Moslems he is welcoming into America.

None of these people, like the blacks who live here already but are anti-white and anti-American, the Mexicans and South Americans, and the Moslems, none of these people are coming to America to become Americans.  They are coming to America to remake this nation into their original homelands; blacks to have freedom to live savagely stealing and killing, Mexicans to have socialist dictators ruling, and Moslems to impose Sharia Law and be able to oppress and persecute all others.  Americans who allow these ideologies to flourish and welcoming them into the Land of the Free and Home of the Brave are the worst sort of traitors to exist.  They are delivering the greatest nation in the history of the world to her enemies.

Help wanted: President of the United States, no experience necessary

This site is my opinion only and is unpaid. I am a retired Paramedic/Firefighter with 25 years of service in the City of Dallas Fire Dept. I have a B.A. degree in Journalism, and A.A. degrees in Military Science and History. I have spent my life studying military history, world history, American history, science, current events, and politics making me a qualified PhD, Senior Fellow of the Limbaugh Institute, and tenured Professor for Advanced Conservative Studies. 😄 It is my hope that readers can gain some knowledge and wisdom from my articles.
View all posts by dustyk103 →
This entry was posted in Election 2016, Illegal Immigration and tagged America, Anchor Babies, Black crime, Black culture, Blacks, Democrats, Elections 2016, Hispanics, Illegal Aliens, Illegal Immigration, Invasion America, Islam, Mexican culture, Mexicans, Moslems, Muslims, Republicans, Southern Border. Bookmark the permalink.