Socialism, capitalism, and the American Way

Socialists and Capitalists see the world from very opposite perspectives

Socialism sounds like a fair and equitable system to the ignorant mind that does not understand work and barter, or the function of business and money that eventually supplanted both.  It would work excellently for a tribe in which all members rely on mutual cooperation.  But when expanded beyond a few dozen people, this system quickly breaks down as those who are lazy don’t produce and those who are greedy take more than they need.

The result of socialism is the result seen in every form of government; from its offsprings – Fascism, Communism, Nazism, and Islamism, to its predecessors; Monarchical despotism and Imperialism.  (A simple fact; in the 20th century this ideology and its offspring accounted for some 100 million people slaughtered and another 100 million killed in wars.)  In order to keep the lazy and greedy from taking advantage of the system the government must be authoritarian and dictatorial.  The complete collapse comes when those who rise to power are the most greedy and corrupt of all because wealth attracts the greedy.  They leave everyone who is not part of the power structure to be slaves to the ruling class, destitute, and unable to rise save by favor from above. 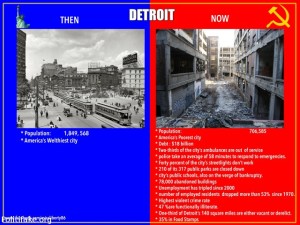 The city of Detroit is a shining example of how Democrat corruption can bring down the greatest of wealth.  When Democrats gained control of the government in the 1950s, Detroit was the richest city in the country.  After fifty years as Democrats took over every corner of the state and city government, Detroit is becoming a veritable ghost town.

Capitalism, on the other hand, that is based on free markets with a Republican form of government has the opposite effect.  Where those in socialism who attain power become wealthy, those in capitalism who attain wealth become powerful.  In capitalism it is possible to rise from the bottom by “building a better mousetrap so that the world beats a path to your door.”  The danger of corruption is lessened because the people and the law work to stop them rather than be controlled by them in a dictatorial state, but it is still there.

Democracy and Republican governments are similar, but not the same.  Democracy fails for the same reason socialism fails, because everyone has a vote and there are those who will vote for their own self-interests rather than for the good of all.  They are more subject to corruption and being led by panderers and demagogues.

“Democracy is two wolves and a lamb deciding what to have for lunch.” – Benjamin Franklin

The Republican form of government is run by elected representatives chosen by only those citizens who are proven responsible rather than anyone who draws a breath.  It was created by the Romans in 500 B.C. by Camillus and, twenty three centuries, later used by America’s Founders to formulate the U.S. Constitution.  But even with the best of systems in place it is always liable to be infiltrated by those who will corrupt and overthrow the system for their own benefit.

The Roman Republic was overthrown by Caesar to be made Emperor, and America is in the throes of being overthrown now.  America has been in danger before by greedy entrepreneurs like the Robber Barons of the 19th century.  But staunch conservative Christians, like President Theodore Roosevelt, put a stop to their practices of acquiring wealth while paying starvation wages by passing laws to break up monopolies.

Roosevelt saw that free market capitalism required some guidelines to keep from being abused.  He believed in giving employees legal rights to protect them from employers who would make them slaves, and by demanding that those who benefited greatly from the American system pay back a small percentage for the benefit of the nation.  But Democrats saw this as an opportunity to establish control over the working class through union bosses who served them.   And on the flip side they did away with Roosevelt’s small income tax on the wealthiest to impose confiscatory taxes to steal wealth away from the successful and take money both coming and going from the Middle Class.  By this means they secured their own power for the next century by making it extremely difficult to rise to power through wealth without the approval of, by paying off, the ruling class.

From its founding America had been divided between those who wanted a Republic and those who wanted to establish an oligarchy.  After Teddy Roosevelt foolishly divided the Republican ticket in 1912, Democrats found the key to swaying the public by blaming the Republicans for everything that was wrong in their lives and taking credit for everything that was right.  Despite their policies creating economic recessions and depressions for the last century, tens of millions of voters are daily fooled by their propaganda and incessant class warfare appealing to the greedy and envious.

Democrats always play the “Republicans are corrupt” card, but when the light of truth shines on history their fraud is exposed.

People are confounded by facts they do not understand and do not take the time to explore.  The Left constantly demonizes and smears the Right as doing what they themselves are actually doing.  This is well illustrated by the following articles in which leftists accuse the Right of being welfare hogs.  The Left saying Republican states take more welfare from the government than Democrat states is as flawed liberal math as saying California’s Democrat run economy and taxation is superior to Texas’ Republican one.  California is billions in debt with a shrinking economy while Texas runs a surplus with an economy that is growing so well it has kept the nation’s economy in the red for the last six years.

Yes, there are Democrats living in Red States

Red state, blue state, who received the most federal funding

Which side is lying?  The side that says Republicans are racist, sexist, bigot, homophobes who are only for the rich and want all other people to die in the streets?  Or the side that is demonizing the other side while making laws and regulations to take more taxes, spend more taxpayer money than they take, give more money to those who won’t work, and says they are not only saving the world’s poor, but also the planet?  Socialists always complain about having to pay taxes to support their community and always think someone else should be taxed more.

Conservatives, moderates, and liberals have completely different ideas of what the money citizen’s pay in taxes represents:

A conservative sees people’s income as the citizen’s money and the government will only ask for enough in taxes to pay for necessities to; a) protect the citizens physically with military personnel and, b) protect them legally with judicial personnel.  The Armed Forces, Reserves, Law Enforcement, and Fire/Rescue Services are all the government military from federal down to local that protects citizens from foreign invaders, criminals, and natural daily hazards.  The judiciary is everything from the Legislature to the Supreme Court and the DoJ down to the town courthouse and district attorneys.  They make and uphold the laws to stop crime and corruption and to adjudicate disputes between citizens.

A moderate sees people’s income as a pool from which they provide the military and legal services necessary, but also money they can use for their own programs they believe will benefit the country.  After that then the rest of the money is their piggy bank to use for make deals, grant subsidies, and make loopholes for their friends so they can prosper for doing the job of running the government.  This is where corruption begins.

A liberal sees people’s income as the government’s money and any money the government allows the citizen to keep is a handout.  They use a portion of that money to provide services, but most of that money is theirs to dispense as they see fit to their friends and family, and maybe give some to voters to buy their future support.  This is the pinnacle of corruption and the reason why democracies fail and become socialist dictatorships.

Proof of fraud – the Democrat agenda to tax American wealth

Left: Taxpayers keeping their income are getting “handouts”

Racism – the colossal ignorance of the Left’s language of division

The Final Solution to Islamic terrorism

This site is my opinion only and is unpaid. I am a retired Paramedic/Firefighter with 25 years of service in the City of Dallas Fire Dept. I have a B.A. degree in Journalism, and A.A. degrees in Military Science and History. I have spent my life studying military history, world history, American history, science, current events, and politics making me a qualified PhD, Senior Fellow of the Limbaugh Institute, and tenured Professor Emeritus for Advanced Conservative Studies. 😄 It is my hope that readers can gain some knowledge and wisdom from my articles.
View all posts by dustyk103 →
This entry was posted in Conservatism vs. Liberalism, Economy, Election 2016, Obama's legacy, Right vs. Left and tagged America, Capitalism, Democrat, Economy, Government corruption, Republican, Socialism. Bookmark the permalink.

3 Responses to Socialism, capitalism, and the American Way