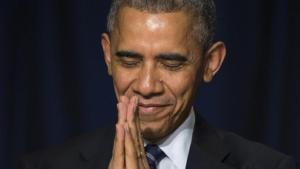 At the National Prayer Breakfast, Obama addresses the atrocities of Mujahideen Jihadis by condemning Christians for past atrocities committed in the name of Christ.  Saying that Islam is a religion of peace and that ISIS does not represent the teachings of Mohammad, his words are revealed to be atrocities against the truth.

Obama condemns Christians in the face of Jihadi barbarism

Obama spoke of Gandhi G extolling peaceful resistance to Moslems.  Anyone who understands history knows that Gandhi ordered the separation of Moslems from Hindus in India resulting in the creation of the country of Pakistan because their violence was intolerable.  Obama compared the Jihad to the Crusades and Inquisition, which professors learned in history condemn as comparing a nuclear explosion to a firecracker.

Obama’s condemnation of Christians calling for war to stop the Jihad is an intolerable perversion of the words of Christ.  Jesus said to love your enemy, not to give your head to murderous savages.  He didn’t have to speak on war, murder, and rape because the laws of both God and man are clear how to deal with those who live by the sword.  Making a moral equivalence of atrocities from centuries ago with what Moslems are doing today makes Obama a duplicitous fool.

Those who are without a moral compass do not comprehend the difference between the criminal who lives by the sword and the policeman who uses a sword to protect others.  Likewise, Obama has no moral compass to comprehend the difference between fourteen centuries of the Jihad against all infidels and efforts made to stop it.  The Inquisition was an extreme response to the Jihad by the Catholic Church, but it was Christians who put a stop to it, while Moslems embrace the Jihad as taught by Mohammad to this day.

Moslems are not immigrating to freedom, they’re colonizing infidels

SURVEY – What do you believe Moslems believe about Jesus?

SURVEY – How well do you know Mohammad and Islam? 10 questions

SURVEY – What is your American Dream?

This site is my opinion only and is unpaid. I am a retired Paramedic/Firefighter with 25 years of service in the City of Dallas Fire Dept. I have a B.A. degree in Journalism, and A.A. degrees in Military Science and History. I have spent my life studying military history, world history, American history, science, current events, and politics making me a qualified PhD, Senior Fellow of the Limbaugh Institute, and tenured Professor Emeritus for Advanced Conservative Studies. 😄 It is my hope that readers can gain some knowledge and wisdom from my articles.
View all posts by dustyk103 →
This entry was posted in Islamism, Religion and tagged Barack Obama, Christianity, Crusades, History, Inquisition, Islam, Islamic Jihadis, Jesus Christ, Jihad, Mohammed, National Prayer Breakfast 2015, Prophet Mohammad, Spanish Inquisition, Terrorism. Bookmark the permalink.