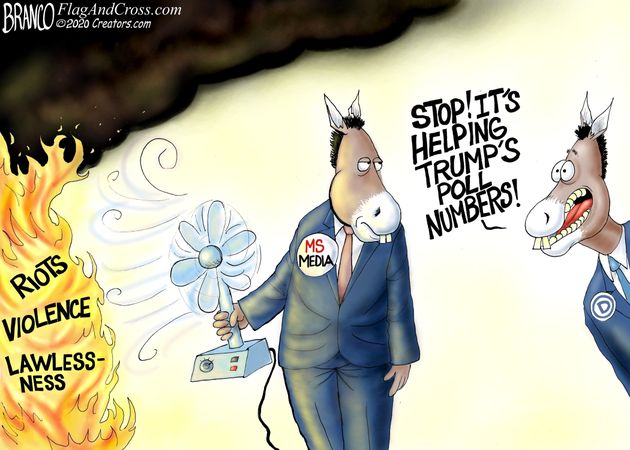 A pack of Democrats in Portland stood over the body of an innocent, defenseless Trump supporter they had just murdered and cheered, “We killed one of the Nazis!” Liberals are willing to lie, cheat, steal, and kill on the basis of false accusations, rumors, and innuendos. They require no proof of what they believe. They do no investigation of the facts behind what they are told. They mindlessly believe whatever leftist deceivers tell them and, like lemmings, follow them off the cliff even to the point of committing murder of a man they accuse without evidence of being a racist Nazi. Their lack of a moral compass enables them to be manipulated into becoming the hateful bigots they say they despise while believing they are righteous. This is the same mentality of those in the past who condemned innocent women to be burned as witches. Forcing them to look in the mirror to see the truth is like showing Dracula the Cross.

In Biden’s speech he threatened more Democrat violence after the election if Trump wins. The two-faced leftist thinks he can now claim he wouldn’t defund the police or ban fracking, and liberals stupidly believe that is his new stance. We all know he is now a puppet of the radical left that wants to destroy this country. For Biden to speak with his forked tongue saying that the riots are Trump’s fault, that it is the president that wants this chaos is so disgusting that he shouldn’t be ashamed for saying it. He should kill himself for it. But Democrats lack a moral conscience, so speaking as snakes in the grass is the height of their morality. McCarthyism needs to be brought back to America with a vengeance!

Only the most witless fools delude themselves to believe anything that Democrats say. They constantly reveal their true nature as the scorpions in every false accusation they make against Republicans. Every time a conservative speaks the truth about Democrats, they smear, slander, and censor him, then make the same allegations falsely against Republicans. This is the pathological lying sociopath’s defense of falsely accusing the righteous of being the pathological lying sociopath to obscure the truth. Only those who are not duped by this simple gaslighting fail to be manipulated because we conduct our own investigations into the truth. Liberal’s lack of a moral compass is what leads them to justify their wrongdoing.

The truth is that, just as all people are born liberals, all people are ignorant, but only some grow up and remain dumb. They believe the first thing they are told and adhere to that regardless of the facts. This is simply due to their egos making them unwilling to admit they are wrong. For liberals, the refusal of conservatives to accept their false erroneous facts makes them guilty of being the ones who are duped. No liberal can win a debate with a conservative who is armed with all the facts. That is why leftist ideology relies on the use of force to impose their beliefs through fear of violence. That’s when it requires the courage to stand against this kind of evil. People must become adults to be able to overcome their prejudicial ego lest they be sucked into the bigotry of leftism. And they must become soldiers to fight against the violence of leftism that would subjugate them. 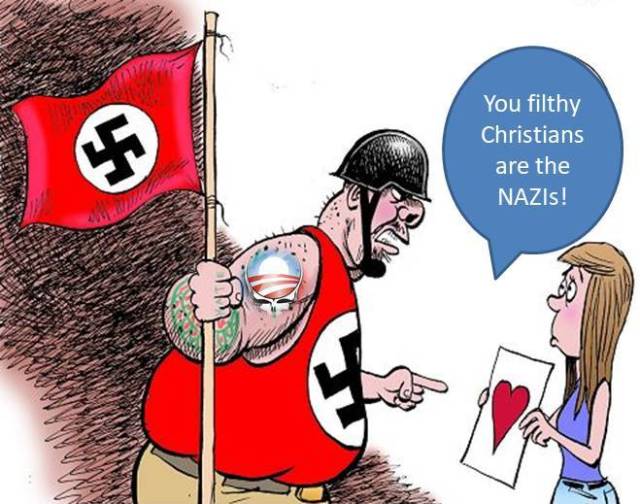 Democrats are calling Trump counter-protesters “militia vigilantes” because they shoot paintballs at Antifa/BLM violent protesters to mark them for police. Democrat’s “peaceful” radicals come to protests wearing body armor carrying weapons. They say they are to protect them from police brutality. They use them on defenseless Trump supporters. Then they do battle with police who are hobbled from using their weapons in response. Since when have bats, bricks, lasers, and firebombs not been deadly weapons used to maim and kill? Police in the past would have crushed these riots. But Democrats empower these criminals and, if the police arrest them, set them free making them exempt from obeying the law.

Democrats won’t tell the truth. Biden says Trump’s law and order campaign is racist. The media has censored the truth of their riots until President Trump forced them out in the open. The genius of Trump is that he tells lies about Democrats forcing them to refute him to claim he is the liar by revealing the truth, thus exposing their own lies. Their polls, like 2016, are rife with lies that the majority of people support Biden. How can that be when 75% of people endorse law and order against Democrat’s defunding the police? A poll of only Democrats shows only 65% support for socialism and their rioters. That leaves 75% of the country against them. Why would that other one third of Democrats continue to vote Democrat? What would happen if President Trump submitted to Democrat’s fraud and violence?

If Trump Submits to Fraud 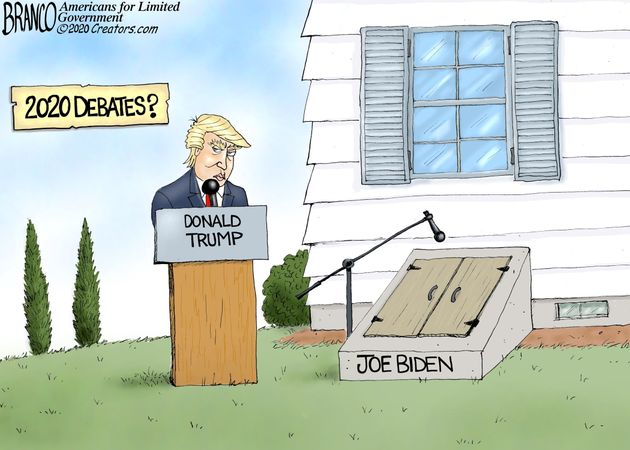 The Kenosha riots, as all riots in Democrat cities, were committed by hired Democrat thugs being bussed from place to place. A pack of goons trying to terrorize people is the very definition of Nazi fascists. There are Democrats in government and among their rich donors who are funding these professional rioting thugs. Sen. Rand Paul, one of the Republicans who were assaulted leaving the RNC Convention held at the White House, stated this fundamental truth. Democrats have been paying for these rioters to trash their own cities. They have been claiming in their lying leftwing media, concealing the truth, that these people were peaceful protesters, until their meme because so ludicrous that it affected even their bogus polls. Now they are blaming it all on Trump ginning up hate after they spent five years slandering him and Republicans as racist Nazis.

BLM fascist commies are murdering Americans. They are screaming that they want to burn down the White House, murder Trump and all white people. Democrats are trying to say Russia is manufacturing these quotes that are on video as they fan the flames of a potential race war from behind the scenes as well as in front of the cameras. Democrats are waging war on America violently attempting to subdue and enslave citizens. This is not a subject for campaigns by which Republicans to raise money. This cannot wait until the next election. These insurrectionists MUST BE FORCIBLY REMOVED FROM OFFICE NOW! We cannot allow the massive mail-in voter fraud by Democrat operatives filling out ballots anonymously in other people’s names to overthrow the Constitution.

As BLM terrorists stood in the street cheering over the body of an unarmed man they murdered, Democrats speaking through Biden vowed that if Trump is re-elected then next year the violence will be worse. I want President Trump to prosecute that war now as much as they do, not as a race war, but as a counter to the civil war they are already waging. I want the righteous might of the American people to rain justice down on their heads. I want President Trump to be Marshall Wyatt Earp when he took on the terrorist criminals in Tombstone and tell them, “You called down the thunder, we’ll you’ve got it!” The outcome will be the same today as it was then. 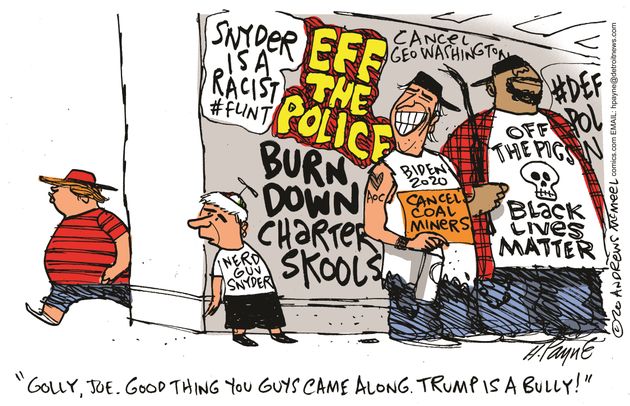 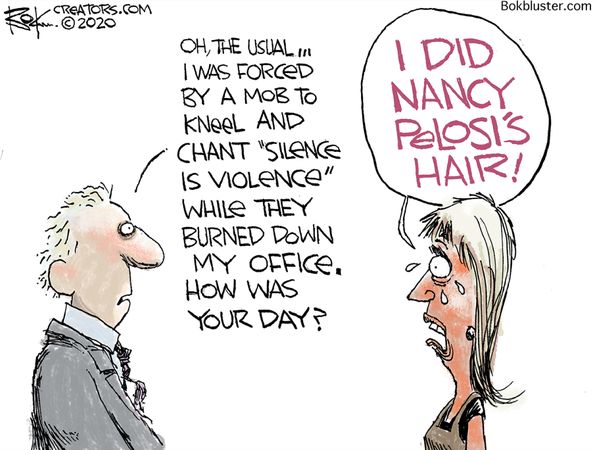 This site is my opinion only and is unpaid. I am a retired Paramedic/Firefighter with 25 years of service in the City of Dallas Fire Dept. I have a B.A. degree in Journalism, and A.A. degrees in Military Science and History. I have spent my life studying military history, world history, American history, science, current events, and politics making me a qualified PhD, Senior Fellow of the Limbaugh Institute, and tenured Professor Emeritus for Advanced Conservative Studies. 😄 It is my hope that readers can gain some knowledge and wisdom from my articles.
View all posts by dustyk103 →
This entry was posted in Democratic socialism, Elections 2020 and tagged American Civil War II, Antifa Nazis, BLM terrorists, Cancel Culture, Democrat agenda, Democrat riots, Donald Trump, Joe Biden, Liberalism. Bookmark the permalink.