$5 Trillion to Save 2 Million Lives

The five trillion-dollar question is: Was this shutdown necessary and successful? Only in America could the president do what Donald Trump has done to save the lives of two million Americans and be smeared for it. Do Democrats credit President Trump with saving millions of lives from the Coronavirus pandemic? Or are they blaming him for every single death? Are they thankful that he shut down the economy to save lives? Or are they smearing him for running up the deficit? Are they thanking him for rescue bills putting trillions more debt on our descendants? Are they praising him for his compassion? Are they grateful that the president cares so much for America lives? Or are they damning him for not giving taxpayer money to illegal aliens? Are they worried for their citizens? Or are they extorting and imprisoning citizens while setting criminals free? 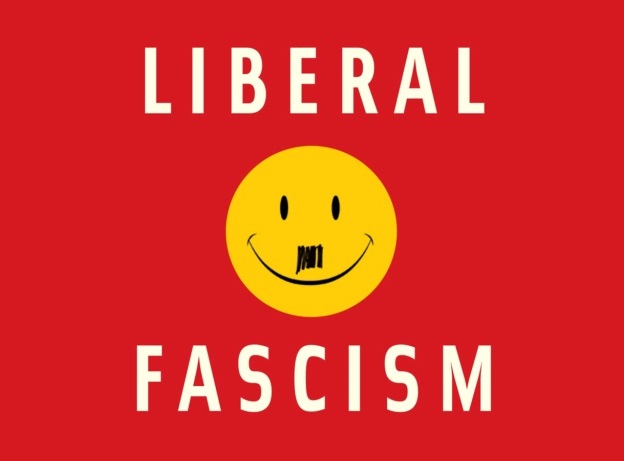 Was this shutdown worth the cost? Businesses wrecked, lives ruined, trillions of dollars squandered. Are you essential? Everyone in government got paid while telling everyone else they were not essential. They shut down businesses and travel demanding money from the federal government to help those put out of work. They demanded more money for those people than many they got paid in their jobs and got it. They requisitioned medical materials in amounts ten times more than needed.

Now, Democrats are keeping businesses closed into a third month because they don’t consider any business that doesn’t directly serve them to be essential. That’s because the morons don’t understand where they get their money. Without business there is no tax revenue. Now they are asking for a bailout in trillions of dollars to cover their own fiscal waste that has been going on for years. Borrowing trillions of dollars against future generations is not how America prospers. Obama stole ten trillion dollars from our children to fund government unions, blue state corruption, and foreign socialists like the Muslim Brotherhood to create ISIS.

As businesses lost trillions of dollars, employees didn’t get paychecks, and expenses didn’t relent, government was supposed to help the people with relief bills expecting that money to see them through this crisis. But Democrat governors are withholding that money. They want to divert that money to their cronies and illegal aliens. Democrat governors sent Covid infected people to nursing homes killing thousands. They jailed citizens for opening their businesses, or just going outside, while they released violent felons into the populace to terrorize them. Why do people vote for Democrats? The same Democrats that infected nursing homes are smearing Hydroxychloroquine that even the president is taking as being a harmful drug. 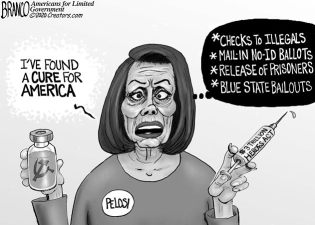 Democrats know nothing but smears, stupidity, and hate

Obama tells graduating students they know better than the people in charge. President Trump retorted causing liberals to declare he is unstable and hateful. This is how leftists attack you, and when you fight back, declare you, the victim, to be the instigator. They spit in your face, and when you punch them, they tell everyone you started a fight to justify themselves attacking you. It has been the Modus Operandi of leftism throughout history. It’s how Islamists justify their Jihads to kill infidels.

Expect Dementia Joe Biden to “die of Covid” in the fall. Expect every Democrat controlled state to make mail-in ballots legal so they can count millions more ballots after Election Day until they overturn every majority for Trump’s re-election. America’s Civil War II is either going to fail to unseat President Trump because he takes action against Democrat sabotage corrupting the vote, or he will fail to protect America from the left. There is no middle ground. He either suppresses illegal voting to suffer the slings and arrows of Democrat smears of racism, or America becomes a socialist dictatorship under leftist Democrats.

This shutdown was an unmitigated disaster. The nation has never before been shut down over a pandemic. The repercussions of this will be felt for months to come. The only reason it happened was because Trump’s medical advisors told him if he didn’t then two million people would die. It has been a vehicle by which Democrats are destroying the remarkable economic recovery created by Trumpism obliterating Obamaism. Democrats are proving that this was the lie they concocted and instigated with the help of the Chicoms to destroy the great Trump economy. China spread the virus to the world and NYC spread the virus across America. Now they want Americans to put their trust in them by allowing them to use mail-in voter fraud to steal back power.

Gov. Cuomo, Democrat’s “hero,” killed thousands of elders by putting virus infected patients into nursing homes. He says blame Trump’s CDC recommendations. What? He’s too stupid to figure out that was a bad idea for himself? Why did the CDC recommend that? To clear out hospitals that never needed the extra room? He’s smearing DeSantis in Florida for reopening when he has ten times as many dead and infected that the Florida governor who did everything the smart way. Typical Democrats. Blame others for their own mistakes and take credit for the successes of others, and then smear them for their successes. Their hysteria of demanding people have masks on outdoors and maintain a distance of six feet while wearing masks is proof of how looney toons they have become in their tyranny.

From the beginning, leftist liars have exaggerated the virility of this virus with Obama agents still in the White House telling the president that ten times more people would die than they knew would. They deliberately exaggerated their models with phony data. As the presidential campaign continues, Democrats will smear Trump as having the worst economy ever, the highest unemployment, the greatest deficit spending, and still blame him for every death they falsely attribute to this disease. Americans are already rebelling against Democrat tyranny. Pray that President Trump can turn the tables on them and squash their attempt at enabling massive mail-in voter fraud.

How do people say they are for America and vote Democrat? Their party is wholly invested in overthrowing the president and imposing their socialist slavery on the nation. These people have not changed since the Founding and have been eager for blood ever since Republicans took their slaves away. They have never changed their goals, only their tactics. How many times can they dupe people into believing that they are for the little people as they damn Republicans as only for the ultra-rich? These last twenty years have proven that Democrats are for the elites in their party and duping their lemmings, rigging the vote, and imposing their ideology to enrich themselves is their only goal.

Killing the Golden Goose to make people dependent on Democrats

Because of the Chinese coronavirus, new jobless claims totaled to 36.5M since mid-March

Covering His Culo: Cuomo says ‘nobody’ should be prosecuted over coronavirus deaths amid criticism over nursing home policy

Despotic de Blasio: City’won’t come back,’ Feds must give us billions 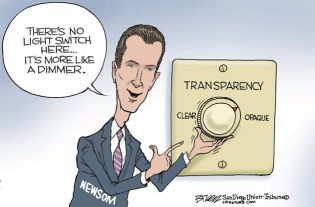 [President Trump is in a conundrum. Either he has just ruined the economy to save two million American lives from a Chinese virus attack or he has fallen prey to a Democrat hoax to destroy the economy. In either case he must declare the former to justify the economic destruction that has been wrought. He has put American companies on a war footing to produce the necessary machines and medicines that are required, along with aiding hospitals, businesses, and employees to the greatest extent possible by the U.S. government. Democrats will either prove the truth or lie of this virus by either commending the president for saving millions of Americans, and giving them the aid they needed for the residents of their states to survive, or they will smear and slander him as incompetent and guilty of letting the people suffer. No president in history has ever faced so diabolic and evil a shadow civil war than Donald Trump.

Joe Biden is so demented that he is speaking his mind about voters telling them off saying not to vote for him if they don’t like him. Biden’s comment that any black who doesn’t vote Democrat but votes for Trump “ain’t black” is more proof of how trivially they think of their voter slaves. Biden says look at his record. He’s been in government for fifty years and how much has the black community in Democrat controlled cities and states improved? The truth is that blacks voting for Democrats betrayed their ancestors who suffered under Democrat slavery and fought to be free. They were appalled to watch their grandchildren lured back into bondage by Democrats creating the Great Depression with their ultra-high tax confiscation plot.

Now Democrats seek to stop Blexit by creating fears of Covid racial disparity. Democrats don’t take care of blacks. They make empty promises to keep them in thrall while they gin up racial strife over which fools believe them. Blacks and all minorities have benefited immensely under the Republicanism of President Trump. The proof of this is the left using their Russian collusion delusion to distract from the great economy created by Trumpism destroying Obamaism. They are still using the lie that Trump’s Charlottesville remarks about the peaceful protesters being good people by deliberately misconstruing it to be about neo-Nazis and KKK who were fighting with BLM (all of which are Democrat entities if you know anything about history). Democrats smear Republicans as racist country hicks while they breed ignorance and corruption in their city ghettos.

Until they realize or learn how they have been duped, blacks in America will continue to suffer under Democrat’s rule falling for their constant propaganda and gaslighting. Overcoming this delusional, dysfunctional thinking is a monumental task that less than one in ten blacks comprehend. The GOP has done more for blacks throughout history than they will ever realize unless they are educated and taught not to idolize gangsters, while Democrats have done nothing except keep them in thrall either by force, coercion, or deception.]

Behaving Like Nazis – How the Left Operates Duping Liberals

*Rush update 051420 Democrats using shutdown to stick it to businesses:

This site is my opinion only and is unpaid. I am a retired Paramedic/Firefighter with 25 years of service in the City of Dallas Fire Dept. I have a B.A. degree in Journalism, and A.A. degrees in Military Science and History. I have spent my life studying military history, world history, American history, science, current events, and politics making me a qualified PhD, Senior Fellow of the Limbaugh Institute, and tenured Professor Emeritus for Advanced Conservative Studies. 😄 It is my hope that readers can gain some knowledge and wisdom from my articles.
View all posts by dustyk103 →
This entry was posted in Democratic socialism, Elections 2020 and tagged Andrew Cuomo, Barack Obama, Coronavirus Terror, Democrat mail in voting, Democrat Tyranny, Donald Trump, Economic shutdown, Elections 2020, Gavin Newsome, Joe Biden, Nancy Pelosi. Bookmark the permalink.

3 Responses to $5 Trillion to Save 2 Million Lives