Trump’s Benghazi.  That’s what they called the Iranian assault on America’s embassy in Baghdad.  In liberal’s minds everything happens in a vacuum.  If Democrats tell them President Trump acted illegally when he enacted a drone strike on the Iranian leaders responsible for this attack, they believe what they are told and have a meltdown.  Democrat’s grasp of foreign affairs is as vacuous and treacherous as their domestic policies, and as equally vacuous of their understanding of their own actions.  In declaring they hoped that the attack on the embassy would be “Trump’s Benghazi,” they make two vital admissions damning themselves:

1) That they are so anti-American that they endorse our enemies killing Americans.

2) That they fully understand and endorsed Obama allowing our ambassador in Libya being assassinated.

In these declarations, they admit that they know what a disaster occurred in Libya on 9-11-2012.  They know that Americans were betrayed.  They know that America was betrayed by Obama and Hillary.  They know.  In having a further meltdown that President Trump wouldn’t allow Iran to kill Americans with impunity, or even assault them on American soil, by mourning the death of the terrorist leaders responsible for this, plus thousands of attacks on Americans who were killed and maimed, they acknowledge their complicity.

Following the killing of Soleimani, Iranians deliberately shot down a Ukrainian airliner that had just taken off from Tehran claiming it was an error.  Liberals dare us to say this is true without absolute, irrefutable proof that we will never get from Iran admitting to it because, contrary to TV, murderers never confess.  Expecting evil people to admit their evil is the pinnacle of folly.  This is not TV and they know it.  Thus, they are prepared to call those who say so “conspiracy nuts.”  Meanwhile, they declare Trump “guilty of war crimes” because they “know” there was no “imminent threat” from Soleimani.  How do they know this?  Because Democrats said so and Democrats never lie.

The depths of Democrat depravity and their corruption has been exposed by the virtuoso maneuvering of President Donald J. Trump.  They take sides with America’s enemies glorifying their evil.  They undermine the president with their actions, both domestically trying to impeach him, and internationally by sending emissaries like Kerry to ally with America’s enemies.  That they then stupidly say they are not guilty of the crimes that have been exposed proving them guilty, saying that Trump is guilty of crimes for which they have no evidence except their empty accusations, and then believing they can pull the wool over the eyes of all Americans through distractions is a colossal joke on their galactic stupidity.

Trump’s Benghazi or No Imminent Threat?

Are Democrats tired of losing yet?

Trump Focuses on Results, Not Process

In 2013, Hillary was questioned before Congress why no help was sent to the embassy in Benghazi for the thirteen hours they were besieged resulting in the deaths of the ambassador, a contractor, and two Navy SEAL security contractors, and her answer was “what difference does it make?”  Obama didn’t send the Marines as Trump did.  He didn’t send any fighter jets or helicopters as Trump did.  He didn’t kill the perpetrators of this attack like Trump did.  The failure of Obama and Hillary is their treason.  Why they are not held accountable is the failure of this nation to mete out justice to elitist Democrat swamp rats.

This last week’s incidents prove beyond doubt where Democrats stand.  Liberals are as ignorant of these events as they are of Benghazi that many think is a person.  Benghazi was an assault on our embassy in Libya by jihadis, the same jihadis that Obama had helped overthrow Kaddafi.  If you believe Obama told the truth in his debate with Romney that he said this was a terror attack in his Rose Garden briefing, then you are a perpetual dupe.  His moderator ally that ambushed Romney admitted to it the next day when most liberals were tuned out.

Obama pulling all American troops out of Iraq, funding the Muslim Brotherhood to create ISIS, then calling ISIS the JV team and performing a faux bombing campaign for two

years, was all a sham to empower Islam.  This was revealed by Trump’s bombing campaign that destroyed them in six months with assistance from other Middle Eastern countries for which Iran, unfortunately, provided the most forces.  Iran has been responsible for the creation of Islamist jihadi terror forces throughout the region for forty years.  Hezbollah only exists because of Iranian funding.  The Jihad in Lebanon has converted that country from a Christian majority into an Islamist sh*thole.  Since the creation of ISIS, Christians in the region have been destroyed or driven out.  Iran only fought ISIS because they were Sunni rather than Shia.  Not understanding this difference is why liberals are so confused.

Last week’s exchanges between Americans under President Trump’s direction and Iranians under Gen. Soleimani’s direction exemplify why Donald Trump is a great leader.  He not only put Obama to shame but exposed Obama for the fraud he is.  Trump only allowed American airpower to assist the Iranians in destroying ISIS because the Iraqis proved to be totally impotent.  Iran only did it to destroy a Sunni force to expand their own influence over the region.  If you don’t know the history of this region the last fifty years, then you are not only woefully ignorant, but mentally unequipped to make any judgments based on what Democrats say.

The overthrow of the Shah and taking of Americans hostage by the Islamist Revolution of Khomeini was not a blessing.  They did not overthrow evil.  They are the evil.  Just look at pictures of Iranians before that.  The Shah was assisted in overthrowing the government in 1953 by the CIA to tamp down Islamism.  Liberals consider that evil because they do not comprehend the true evil of Islam due to 99% of Americans being pitifully ignorant of history.  The propaganda that says the Crusades were evil ignores the absolute evil

enslavement of the Middle East by the Jihad.  Most think that Islam spread peacefully rather than by the sword.

The timeline of Trump’s counterattack last week comes because, following the defeat of ISIS, Iranian backed forces have been at odds with Americans in the region wanting to drive them out so they can make Iraq an Iranian client state.  They attacked an American base killing three soldiers and a contractor.  President Trump ordered a counterstrike that killed 24 of the attackers.  Iran then orchestrated an assault on our embassy in Baghdad that Democrats immediately called “Trump’s Benghazi.”

When the architects of these attacks got together at the airport to plan further attacks on Americans, President Trump dropped a bomb on their heads.  This incensed the Iranians but sent a clear message about how easily and decisively America power can be used to squash their evil intentions.  Their shooting of rockets at a base, but first warning that they would do so and deliberately aiming far afield to avoid casualties was not a humanitarian effort of diplomacy to defuse the situation.  It was a bully that had been knocked on his ass recognizing that getting up to fight would end badly for him, so he instead walked away shouting epithets about how tough he is as he slinks away.  In harmony with them, Democrats damned Trump while giving praises to America’s enemy utterly exposing their true nature of where they stand.

Flashback – when Obama attacked Libya that was no threat to any American interests, Pelosi said he didn’t need congressional permission

Democrat’s condemnations of President Trump are as empty as their impeachment.  To believe them, to vote for them, is to not only betray this nation, but also yourself.  Their words and deeds belie the truth of their lies.  Rush Limbaugh’s insights into the truth reveals liberal Democratism for the fraud it is.  Their every proposal is as much a lie as their every policy.  Working with Democrats is always detrimental to the people because it only benefits the swamp rats of the Washington deep state leftists that seek power over the people.  The reason there are liberals is because all people start out ignorant of how things work.  It is only when they become educated that they become conservatives – and some

Rush even suggested that Pelosi, who has been saying an acquittal of the impeachment in the Senate would be “proof of Trump’s guilt,” should go ahead and deliver the articles to bring about that result so she can spew her spin.  This is how desperately Democrats slander Trump with their “fairness.”  If you want a real Constitutional crisis, allow Democrats to seize control of the Senate through fraudulent voting by illegals and criminals, and impeach Trump again and try to remove him on the basis of their frauds without a crime and let’s see what happens.  Would President Trump allow their coup to succeed, or would he go to war?  Even the most cursory examination of the facts reveals the dysfunctional backwards thinking of liberals when it comes to the guilt of the respective parties.

Democrats falsely say Trump killing terrorist leaders is “to distract from his impeachment.”  More like Trump is doing what the nation needs to be done despite their impeachment.  They say their impeachment is vital to the protection of the nation, and that his claim of a Democrat coup attempt is a conspiracy theory.  More like their impeachment is an attempt to distract from the facts of their coup by falsely claiming it has been debunked before the investigation is even completed.  They are still trying to treat Russian collusion election tampering as a fact while trying to treat their coup as false, which is the opposite of the revealed facts.  Just ask a liberal to explain how Trump is guilty and how Democrats are innocent, and they’ll give you gobbledygook.  This whole debacle of Republicans allowing Democrats to get away with their crimes is reminiscent of the USA allowing China to steal from us and Islamists to murder Americans with next to no retaliation.  America needs a president who will bring them all to justice. 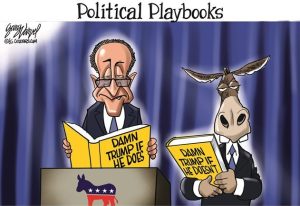 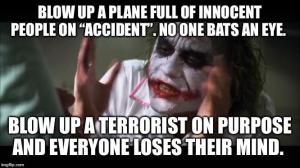 Trump Wins vs. Iran and Democrats

Trump vs. Democrats – ‘Acts of War’ and Betrayal

Iran is to be feared because Nazis are good people, too

Benghazi – From delusion to damnation, from heroism to betrayal 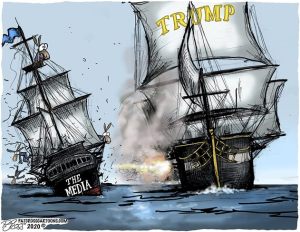 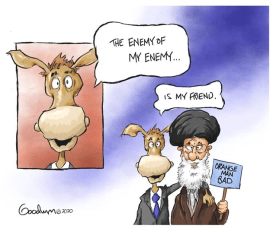 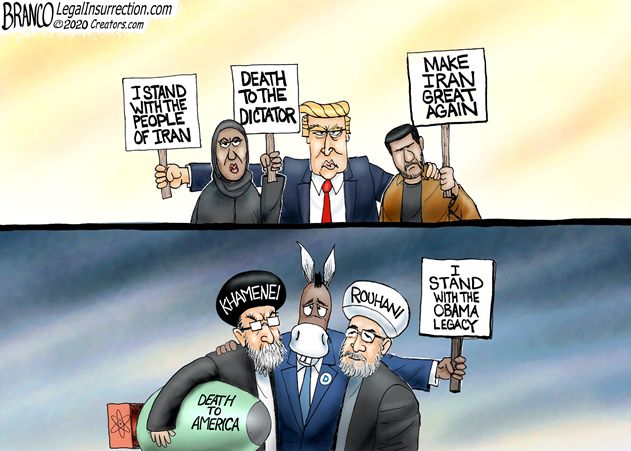 This site is my opinion only and is unpaid. I am a retired Paramedic/Firefighter with 25 years of service in the City of Dallas Fire Dept. I have a B.A. degree in Journalism, and A.A. degrees in Military Science and History. I have spent my life studying military history, world history, American history, science, current events, and politics making me a qualified PhD, Senior Fellow of the Limbaugh Institute, and tenured Professor Emeritus for Advanced Conservative Studies. 😄 It is my hope that readers can gain some knowledge and wisdom from my articles.
View all posts by dustyk103 →
This entry was posted in Democratic socialism, Elections 2020 and tagged America vs. Iran, Attack on American embassy in Baghdad, Democrats condemn Trump Iran conflict, Donald Trump, Iran slinks away from Trump, Iranian Terror Leader killed in dronestrike, Trump Iran Iraq conflict, Trump vs. Iranian Terror leaders. Bookmark the permalink.