Democrats are the party of the left worshipping false gods of their own creation to dupe the ignorant and mislead the foolish.  Their gods represent America as the opposite of her nature:

Democrats are the face of hate.  Understanding Democrats and their hate America ideology is of paramount importance if this great nation is to survive.  The people who forced America to retain slavery at its founding are now the people that want to destroy America for having had slaves.  Democrats want to remake America as a socialist state – which is just another form of slavery.

Democrats have indoctrinated and duped millions of Americans into believing the lies of leftism.  Democrats have not been able to completely corrupt this country.  Now that their 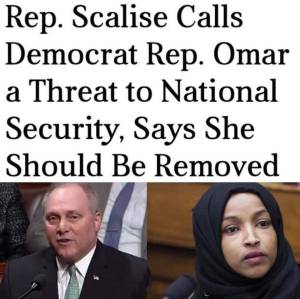 subterfuge has been exposed to impose communism on this nation their only recourse is to re-populate it with outsiders.  Americans at a Trump rally chanted, “Send her back,” about Ilhan Omar (D-MN), a Moslem Somalian immigrant who proposes to transform America from its evil ways.

No one actually wants her to go back where she came from, except maybe to get a good dose of why she left and why she should appreciate this great nation that took her in.  Democrats reveal how deeply they misunderstand Republicans:

RUSH: All right. We’re gonna get straight into this here, the “send her back” business. We’re gonna have a wide– ranging set of comments about this. I want to start, grab audio sound bite number 9. This is David “Rodham” Gergen, who was on CNN last night, Anderson Cooper, and the question was: “I’m wondering, as someone who’s worked in both Democratic and Republican administrations, what is it like to see the president on that stage tonight encouraging, or at least allowing the ‘send her home’ chant to grow?”

GERGEN: Listen, I think that this may work in a short term for Republicans, but if you look at the long term, it’s a much bleaker picture for the Republican Party. All the Millennials, they’re going to be a massive force along with women, people of color in our new politics just five, ten, 15 years down the road. So, I think the Republicans are in an active slow self-destruction in

supporting the president as much as they do, because, in the long term, this could be suicidal.

Why does none of the stuff that makes “send her back” pale in comparison, that pales in comparison to the actual activity, the assaults, the attacks, the damage done to businesses in Ferguson, Missouri, and Baltimore, why does the media never say, “Man, this is not good for the Democrats, that’s a suicidal move”? Let me tell you something. This “send her back” chant last night, there’s so much attached to this.

And let me just say at the outset, I don’t want to send her back. I want her to stay here! And I don’t want her to be silenced. I want Ilhan Omar to continue speaking, because it is working. Trump is winning this. I understand the “send her back” sentiment. I could give you, as I have just begun to do, a series of explanations.

This bozo Gergen forgets one thing – Millennials will grow up and become more educated as time passes by.  Most liberals grow up to become conservatives when they learn the truth.

But most of them have since grown learning the good of America and the evils of socialism, while only a small portion continue to be dedicated to their anti-American liberalism.  Those few have actually become dedicated leftists striving deceive the next generation of ignorant young liberals.  Democrats portray Republicans as being what they themselves are, and portray themselves as being what Republicans are, and only those who ignorantly hate America believe them.  America, however, is getting an education in liberalism as President Trump forces them to expose their true nature.

Trump Steps Back from “Send Her Back”

Conservatives Love Everybody and We Want Everybody to Love America

This site is my opinion only and is unpaid. I am a retired Paramedic/Firefighter with 25 years of service in the City of Dallas Fire Dept. I have a B.A. degree in Journalism, and A.A. degrees in Military Science and History. I have spent my life studying military history, world history, American history, science, current events, and politics making me a qualified PhD, Senior Fellow of the Limbaugh Institute, and tenured Professor Emeritus for Advanced Conservative Studies. 😄 It is my hope that readers can gain some knowledge and wisdom from my articles.
View all posts by dustyk103 →
This entry was posted in Democratic socialism, Elections 2020 and tagged Alexandria Ocasio-Cortez, America, Democratic socialism, Donald Trump, Leftism, Liberalism. Bookmark the permalink.