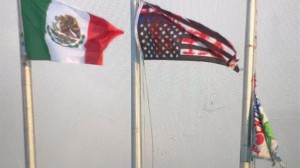 Democrat protesters took down the American flag, put up the Mexican flag in its place along with a vandalized Blue Lives Matter flag.  Democrat’s message is; vote for us to unmake America by fundamentally transforming her into a socialist state like Mexico and Central America.  They urge people to do this because they say America was never great, Republicans are racist Nazis who put immigrant kids in cages forcing them to drink out of toilets, and promise that Democrats will destroy white men by stealing their wealth to give it to criminal invaders.  If this doesn’t convince you that Democrats are insane America haters, then you are lost to reason.  Leftists have nothing to offer America except renewing slavery by justifying 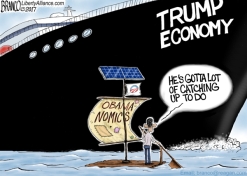 hateful lies about Christians, conservatives, white people, men, and every American patriot.  They think their hatred is righteousness rather than extreme bigotry.

Democrats are talking like America under Trump is like living under Obama when the middle class shrank and people were struggling in his stagnant economy.  They talk of the “shtruggle” of working people who don’t have enough money to live.  While that is always true when Democrats run the show and their high taxes and excessive spending sucks up the wealth, the economy is growing three times faster under Trump Republicans.  While Democrats appreciate a robust economy, they can’t wait to be back in power so they can suck up that new wealth.  Under Republicans all people prosper who are willing to work smarter rather than harder without the government taking what they earn from them. 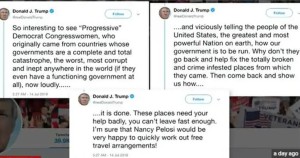 The Face of Democrat’s America Hate

What the Citizenship Battle Is All About

The big dust up over the weekend was over a Twitter war between Trump and Democrat America haters led by AOC and her gang of three.  This resulted in Democrats saying President Trump was being a typical old racist who told those “Democrats of color” to “go back to where they came from,” but when reading what he actually said proves their screeching their typical twisted lies.  It was actually those very Democrats who told the rest of the nation that if they aren’t part of their cabal then they are racist scum – especially those who are black not being black enough for them if they like Trump. 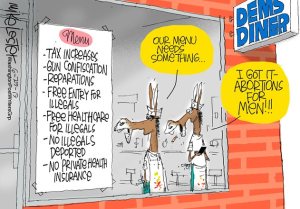 Trump Triples Down! Makes Anti-Americans the Face of the Democrat Party

They included Hispanics and Moslems in their anti-white group of “brown people.”  So what color is Hispanic?  They called George Zimmerman a “white Hispanic.”  What color is Moslem?  Geraldo Rivera said of the president, “I hope he doesn’t believe that a person of color comes from somewhere else.”  How stupid is that?  President Trump said, “If you don’t like this country – leave!”  He didn’t say “Go back where you came from.”  He said, before you condemn America, go fix what you fled.

For the likes of Cortez to say Trump is a weak-minded fool who uses name calling and false facts is a galactic joke and the ultimate in stupidity when that is all she has ever done!  The woman who says he authorizes raids without warrants against immigrants across the country is as lunatic as she is stupid.  And the liberal media makes her the face and voice of the Democrat Party.  The woman who is claiming immigrant children are locked in 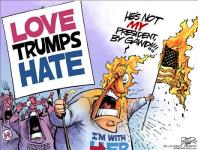 cages and forced to drink from toilets needs to be slapped till her head spins.  Donald Trump slaps her on a daily basis every time he speaks and coerces Democrats to spew their hate revealing who they truly are.

As Tom Homan says, if Democrats keep telling the world to enter this country illegally then more people will come, more women will be raped, more children will die, and cartels will make more money.  This is what the Democrat Cartel wants! 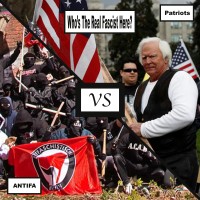 Democrats keep saying Republicans are racist Nazis while they perpetrate racist fascism on American patriots with their every policy benefiting criminals from the streets to corporations to the halls of power.

Of the twenty-four Democratic socialists, i.e. communists, running for president against Trump, the first to dropout is doofus Eric Swalwell who stupidly compared Democrats to the Avengers.  “We’re like the ‘Avengers.’  We’re going to save America!”  How do communists save America?  By saving it from liberty to force free peoples under the yoke of leftism?  This next election is about whether or not patriots can overcome lawless Democrats and their voter fraud machine.  It’s about those who love liberty fighting the forces of darkness that masquerade as angels of light.  It takes a moral compass to see past the liberal façade. 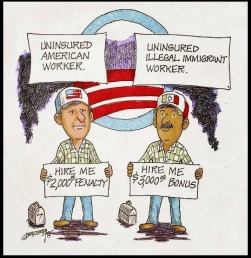 Democrat’s dream ticket would be:

Harris/Warren, w/AOC as Speaker, Feinstein & Gillibrand heading up the Senate, and Omar as Secretary of State.  Their dream is the world’s nightmare.  All President Trump has done during his term to stop illegal immigration has been the exact same things Obama did and what Democrat ever called him a racist Nazi?  President Trump is upholding America law and Democrats in Congress are breaking the laws they themselves made in order to import illegal voters for themselves.  They prove that Obama lied about his border security.  That these people are invaders rather than immigrants is proven in that they want to tear down America and remake her into a socialist dictatorship like those from which they invaded, not fled. 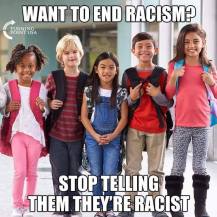 Things That Are Racist According to Democrats

The insanity of the left calling border detention “concentration camps” is proven in that people are not being executed in them but travelling three thousand miles to get into them.  Obama never truly deported any of them but only gave them tickets to appear in court.  This flood of invaders has only one purpose – to overthrow American and make Democrats socialist dictators through massive voter fraud to enslave citizens in debt.

The lie that a citizenship question would reveal illegal aliens to be deported when legal immigrants have to answer the same way is another way in which Democrats confuse illegal alien criminals with legal immigrant Americans.  Democrats want to make residence of America equal to citizenship regardless of these people wanting to destroy this nation.  RINO fools like Kasich condemn Trump’s language but never condemn Democrat’s America hate through their lies like Phil Mudd on CNN who said Trump is a racist trying to keep people who are not white Americans out of the country.

Rush Limbaugh – “Notice these guys, Trump is telling you that he’s gonna keep people that don’t look like you out of the country. Did Trump ever say anything like this? Did Trump ever, anywhere, go anywhere near saying this? No. This is pure

reverse bigotry. This is reverse hatred. [This is Big Lie propaganda!]

“So seriously, Mr. Kasich, all he [Pres. Trump] did was call ’em communists and socialists. Some of them are very proud to be socialists. Communists and socialists are somehow dirty names? As I say, they can call us and have been calling us for decades all kinds of filthy names and lying about us at the same time, and never was there any concern. Well, at least not in the last 15 or 20 years recently has there been any concern.

“We’re losing our soul every time we allow this kind of rhetoric, but we don’t lose our soul when they mischaracterize us? What did Trump say? He called ’em socialists. He called ’em communists. Well, Lindsey Graham did that. Trump backed off on the communist, didn’t go that far. 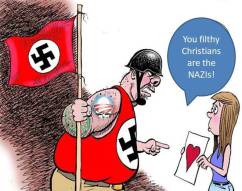 See what a one-way street this is and always has been? And it’s only when we push back that we get criticized by people ostensibly on our side.

“By the way, Kasich was on CNN when he made those comments. We are where we are because people like Kasich have not pushed back ever for I don’t know how long, and it illustrates once again why Trump is president and why his support is continuing to grow is because he’s the only one taking the lead on this stuff, pushing back against these people who intend our country harm! Why not push back on that?

“Why do we have to respect opposing points of views and be gentlemanly about it when they’re trying to undercut the very foundation and fabric of what the country is? We don’t have time to worry about whether some people understand it or not. They have to be shown. That’s what Trump is doing. He’s doing a great job, I think, of illustrating who these people are, and he’s doing it, as usual, within the elected class, he’s doing it alone.” 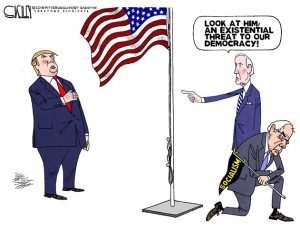 You know a RINO by his bowing to Democrats saying he would cross the aisle to work with them but always condemns Republicans who stand against them.

This site is my opinion only and is unpaid. I am a retired Paramedic/Firefighter with 25 years of service in the City of Dallas Fire Dept. I have a B.A. degree in Journalism, and A.A. degrees in Military Science and History. I have spent my life studying military history, world history, American history, science, current events, and politics making me a qualified PhD, Senior Fellow of the Limbaugh Institute, and tenured Professor Emeritus for Advanced Conservative Studies. 😄 It is my hope that readers can gain some knowledge and wisdom from my articles.
View all posts by dustyk103 →
This entry was posted in Democratic socialism, Elections 2020, Illegal Immigration, Racism, Social Justice and tagged Alexandria Ocasio-Cortez, Democrat Anti-American Agenda, Democrat Communists, Democrat hate, Democrats Import Illegal Aliens, Donald Trump, Ilhan Omar, Illegal Alien Invasion, Social Justice, Trump Racism. Bookmark the permalink.