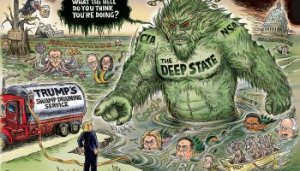 Are Americans sickened to death of the phony Trump scandals yet?  They have become as onerous and numerous as Obama’s actual scandals that he denies exist!  Who is fed up and disgusted with all the fake news about the investigation into the non-existent Russian collusion?  The FBI admits to having a spy in the Trump campaign working for Obama, and the FISA warrant was obtained by a document proven a fraud.  Nunes and Gowdy have both demanded documentation be given to congressional overseers by the FBI and DoJ and have been stonewalled.  Yet they have backed off of their demands for discovery?

Is someone threatening their children?  What about Sessions?  Why hasn’t he taken action?  Are they holding his grandchildren hostage too?  We know these gangster terrorist Democrats are capable of it.  This endless soap opera that is doing nothing but creating great anxiety within the body politic has grown extremely tiresome and exhausting.  Much as has Hollywood’s two-faced hypocrites telling the rest of the country they need to surrender their guns and let strangers into their homes that they must take care of, while they live inside their walled enclosures with armed guards making millions off of movies depicting massive gun violence.  This two-faced liberalism trying to tell the Republicans they are racists and sexists, when it is their party that founded the KKK and still operates fascists groups like Antifa, and their members that are falling like dominoes as proven sex offenders they’ve been covering up, sickens the hearts of righteous Americans!

President Trump, we the patriotic American people have had enough!  This is not entertaining or amusing.  You may want to appear the underdog for the next election, but believe me when I say that patriots who support you want to see you prevail, not endlessly fight these treacherous Democrats.  Obama ginned up his ignorant base of America haters that way because they were the minority, but you don’t have to portray yourself as David fighting Goliath because you have the hearts and minds of the majority of Americans.  That’s why Democrats enlist illegal voters to stuff the ballot boxes.  Your best option is to portray yourself as the noble warrior, not only fighting the corruption, but winning!  You don’t do that by allowing Goliath to get sword close.  Put an end to these lies and put the screws to Democrats to stop their voter fraudsters recruiting illegals to override the American citizens who won’t vote for them!  Declassify the Mueller investigation and force them out in the open!  You gave them an inch and they took a mile.  How many miles of rope do these Democrats need to string them all up?

Declassify the Mueller investigation and the Obama FISA warrant to spy on your campaign!  We know these all criminally violated the Constitution.  We know Mueller has nothing to find in Russian collusion and is violating the 4th Amendment rights of Trumpsters in his effort to dig up or create crimes.  The FBI admitted to putting a spy for Obama in the Trump campaign as well as the DoJ presenting a fraudulent document to the FISA court to obtain an illegal warrant to spy on Trump through wiretaps.  Democrats will never accept your innocence but despise you for the greatness you are bringing back to America.  And they will reject proof of their own guilt, so there is no point in continuing this to try to convince the Left, that hates you and only wants to destroy America by any means possible, that they are wrong.  They already know it and don’t care!  Their goal is simply to overthrow the Constitution and install a socialist dictator.

Declassify the Mueller investigation and the Obama FISA warrant to spy on your campaign!  President Trump – RELEASE THE KRAKEN!

Rush Limbaugh on the crimes of Obama and strategies of Trump

This site is my opinion only and is unpaid. I am a retired Paramedic/Firefighter with 25 years of service in the City of Dallas Fire Dept. I have a B.A. degree in Journalism, and A.A. degrees in Military Science and History. I have spent my life studying military history, world history, American history, science, current events, and politics making me a qualified PhD, Senior Fellow of the Limbaugh Institute, and tenured Professor for Advanced Conservative Studies. 😄 It is my hope that readers can gain some knowledge and wisdom from my articles.
View all posts by dustyk103 →
This entry was posted in Politics and tagged Barack Obama, Declassify Mueller Investigation, Democrat Coup, Democrat Witch Hunt, Donald Trump, Mueller Investigation, Obama spying on Trump Campaign, Phony FISA Warrant, President Trump Release the Kraken. Bookmark the permalink.