Liberal Media is Nothing but Smears, Slanders, and Trump Hate 24/7/365 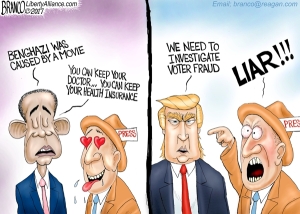 See no evil, hear no evil, speak nothing but evil.  This is the maxim of the liberal leftist Democrat media.

“In order to blow up liberalism you have to tell people what it is.” – Rush Limbaugh

This is the truth of Rush Limbaugh and why he must present the actual facts of liberalism in order present conservatism to give people a chance to choose wisely.  Liberals can never represent themselves or conservatism truthfully.  They must call conservatives racist, Nazis, sexists, and homophobes.  They must create the lie that they are for benefiting the little guy when they only want to dupe them into surrendering their liberty.  They can never tell the truth or just report the simple facts about Trump, but must smear and slander him with their opinions for everything he does.  In their eyes Trump can do no right and Obama has done no wrong.  They create as great a fraud in everything they do and say as their global warming scam.  When President Trump coerces North Korea to give up three American hostages at no cost, unlike Obama who traded terrorist leaders and billions of dollars for hostages held by Iran, they mudsling at Trump where they kissed Obama’s backside.

Everything the liberal media says reflects Obama attitude and those in his administration that America is the evil in the world, not the world’s leading state sponsors of terrorism.  Obama’s CIA Director Brennan, who praised Islamic Jihad and converted to Islam to serve under Obama, who gave away America’s deepest secrets to her worst enemies, says Republicans are misleading the country by following Trump:

[BRENNAN: I think if the Republican Party is going to salvage itself from the trauma of Mr. Trump — and that’s what I think it is — they really need to be able to reach deep inside themselves and find their North Star and say, “Are they Republican partisans first and Trump loyalists first or are they Americans first? Are they going to do what’s right for this country?”

Republicans know EXACTLY who we voted for and why and we APPROVE 100% of President Trump’s words and actions.  Democrats trying to slime him as immoral and Republicans as racists are the liars acting as the pot trying to call the kettle black, except in this case the kettle is white.  (If you think that’s racist then GFY!)

The Democrat Party’s agenda is to tear apart America through division politics, divide and conquer, and then do away with the Constitution to remake America as a socialist dictatorship.  Democrats have always wanted imperial rule from the founding to have the masses serve the elites.  That has never changed.  They fought a war to keep their slaves.  Now they are fighting a war of subterfuge to dupe people into becoming their slaves voluntarily.  So long as they can fool people that they are for the little guy and Republicans are only for the richest 1% they can delude their followers into doing anything they say will steal wealth from those who work for it and give it to them.  That’s why Democrats endorse criminals, thieves, invaders, and even foreign terrorists.

Liberals are using robotic elements on the Internet to create phony massive public support for their lies in order to coerce businesses into supporting their agenda.  Like their propaganda, there is nothing about liberalism that is true except that they represent a minority of Americans who hate this country.  Most of the Democrat Party consists of America haters, criminals, foreigner invaders, phony Internet bots, and voter fraudsters.  Put ICE agents in all the polls in California and New York and watch 20% of their voter base melt away.  Take away their bots on the Internet, stop their censorship through Facebook and Google, and suddenly liberals will be seen for the small minority they are, and conservatives will stand out as proudly as the majority as they should.

Leftists use bots to appear in greater numbers than they are

This site is my opinion only and is unpaid. I am a retired Paramedic/Firefighter with 25 years of service in the City of Dallas Fire Dept. I have a B.A. degree in Journalism, and A.A. degrees in Military Science and History. I have spent my life studying military history, world history, American history, science, current events, and politics making me a qualified PhD, Senior Fellow of the Limbaugh Institute, and tenured Professor for Advanced Conservative Studies. 😄 It is my hope that readers can gain some knowledge and wisdom from my articles.
View all posts by dustyk103 →
This entry was posted in Politics and tagged Democrat haters and liars, Democrat Party, Donald Trump, Liberal media propaganda, Republicanism, Rush Limbaugh. Bookmark the permalink.

2 Responses to Liberal Media is Nothing but Smears, Slanders, and Trump Hate 24/7/365