Liberals spew nothing but hate for Trump and all people who love America.  The liberal media has spent every waking hour broadcasting for the last year all the hate, bile, and sludge they can dredge up from the bowels of their psyches to throw at President Donald Trump in order to assassinate his character in the minds of the American people.  That their lies and smears only take root in their base of brainless liberals, who will believe whatever they are told regardless of the proof before their own eyes and ears, makes them even more insane.  Sean Hannity had an hour long program of nothing but leftist propaganda, delusions, and slanders of Trump in their campaign to turn the nation against his great achievements.

Liberals hold authority in contempt.  They call police pigs, and say of teachers, “those who cannot do, teach.”  What then of liberals, who not only cannot teach, but also fail to learn?  Their dysfunctional thinking always leads to one result, developing an ideology of victimhood that breeds a heart of greed and a soul of envy.  Such people who do not have what they want always resent those who do.  They become hateful declaring that if they can’t have it then no one can.  The characteristic that Satan loves most is vanity bred of foolish pride from the selfishness of believing that they deserve more than that for which they are willing to work.  They believe in alternate realities in which someone like Steve Bannon can be the Darth Lord behind Trump and at the same time be a hero exposing Trump.  Leftists live in a world in which their own reality is dual opposites existing side-by-side and they rationalize this dichotomy as if it’s normal and logical when it is anything but.

Leftist liberalism is the negative pole of political ideology.  American liberal Democrats smear anyone who succeeds in business, prospers, and creates jobs.  From the founding of the nation Democrats have always been the party that promotes dependency on elites, from slavery to Robber Barons to gangster crime bosses to corrupt government overlords.  They always take more from the working people, either in labor or taxes or demanding votes from their welfare deadbeats, than they will ever give back.  Republicans have always fought against their corruption and promoted freedom for people to prosper from their own labor.  It is Democrats who wanted a king to rule over the people rather than a president subject to the will of the people.  Righteous Americans were taught to admire achievers, while the greedy, envious Left resents them.  They are the people who live their lives in a state of having their glass always being half empty.  They are never proud of others for their achievements, but resentful for them for excelling beyond themselves.  Yet they are not willing to make the effort to better themselves.  Rather they would tear down those who do.  With liberalism it doesn’t matter what you do, how right you are, or what you achieve.  For example, when Trump lowers taxes they do not credit him with helping the middle class save money from government waste.  They claim he is taking from them and giving to the rich.  When they tell lies about Trump their two-faced reality is truly exposed!  If he doesn’t respond they declare he is hiding from the truth, but if he does respond they declare they struck a nerve so their lie must be true.  You are always damned if you do and damned if you don’t with liberals.  They will complain if they don’t have work to do and then complain if they have to do work.  Leftist criminals are so deranged they would complain if they were shot with a new bullet.

Two-faced liberalism goes far beyond the rational thinking of the reasonable person.  They say they are patriots but demand policies that override the Constitution to tear down the country rather than build it up.  They see America as the problem rather than the solution to the ills of the world.  They say they are compassionate but would happily destroy the half of the population that refuses to submit to them.  They say they are knowledgeable but don’t know the history of the socialist ideology they endorse.  They say they are learned but don’t know the science they claim others reject.  They believe their own lies in claiming Trump didn’t want to be president, but stole the election by colluding with Putin, make sense.  Only in liberalism can you find two opposing beliefs to be held as true, especially when both have been proven to be complete lies.  Can anyone not see this as dysfunctional thinking?  Liberals do not care for right and wrong, truth and lies, justice and corruption, only what they can use to drag down those they see as their enemies, which is anyone who stands up for right, truth, and justice.  Their idea of justice is not what is morally right, but that which benefits themselves.  Their entire campaign to steal the election from Trump and anoint Hillary is exposed in their constant hateful smears of Trump claiming he is deranged, stupid, a rapist, and stole an election he didn’t want to win.  The truth that rules over these lies is that Donald Trump is a genius self-made billionaire who built a great real estate empire.  The truth over these lies is that he is fully in command and capable of being a great leader and a great president and is doing so on a daily basis.  The truth over these lies is that in their witch hunt investigation into the non-existent Russian collusion they are charging Trump supporters with any crime they can invent, and they are trying to charge Trump with obstructing an investigation into a crime that doesn’t exist!  Liberals say it doesn’t matter if something is factually true, just so long as the notion of what they believe is true is presented as the truth.  But that’s not where this duplicity ends.  It goes far beyond this, beyond our atmosphere, beyond our solar system, and into the galaxy.  There are people who believe President Trump will end all life on the planet by letting Americans mine and burn coal.  The party that says they are the party of science isn’t even the party of science fiction.  They are the party of religious fanaticism that does not believe in God but creates their own.  They quake in fear that Trump is taking lightly a pot-bellied megalomaniac who believes having a nuclear weapon makes him all-powerful.  Trump is standing courageously in the face of everything the Left is throwing at him and they call it hubris.  They think they are the arbiters of courage and good sense and they say that it is the Christian Right that is checked out of reality.

Trump can end the human species

Being a Smart President vs. Being a Stupid One 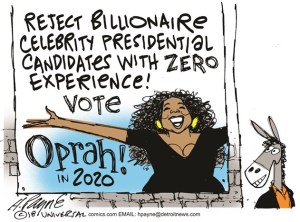 This site is my opinion only and is unpaid. I am a retired Paramedic/Firefighter with 25 years of service in the City of Dallas Fire Dept. I have a B.A. degree in Journalism, and A.A. degrees in Military Science and History. I have spent my life studying military history, world history, American history, science, current events, and politics making me a qualified PhD, Senior Fellow of the Limbaugh Institute, and tenured Professor Emeritus for Advanced Conservative Studies. 😄 It is my hope that readers can gain some knowledge and wisdom from my articles.
View all posts by dustyk103 →
This entry was posted in Politics and tagged Americanism, Bill Maher, Climate change, Democrat propaganda, Democrats, Donald Trump, Fake News, Global Warming, Globalism, Hollywood Elites, Islamism, Leftist haters, Liberalism, Oprah for President, Oprah Winfrey, Socialism, Stephen Colbert, The Rock for President, Trump Derangement Syndrome. Bookmark the permalink.