Leftists loved Trump until he ran to become the president who would restore the republic.  Now they set out to destroy any entertainer who speaks up in his favor.

Hollywood actors, producers, directors, and script writers, singers, musicians, artists, sports athletes, mass media; the Leftarts are destroying entertainment with their indoctrination propaganda of America hate.  To them America is the source of evil in the world, the problem to be eliminated, not the Shining City on a Hill and bastion of freedom to be emulated.  They see America as the home of Christians who worship an oppressive God and Satan is the liberator who will lead the world to freedom by destroying them.  They won’t admit that Satan is their god, but their actions speak louder than their words.  Like Obama, it’s not what they say to which you should pay attention, it’s their actions – the actions of pathological liars deceiving their victims.

Just as Obama corrupted America’s law enforcement through racists Eric Holder and Loretta Lynch, and intelligence agencies through sycophant Brennan who willingly submitted to Islam under Obama, and to work against American patriots like the TEA Party rather than foreign insurgents like Islamist jihadis, Hollywood and the MSM use their influence to twist the truth and indoctrinate the oblivious into their leftist ideology through our news and entertainment.  Football players taking a knee during the National Anthem to protest non-existent Republican racism, singers refusing to perform in states that stand against Democrat depravity, actors speaking out against capitalism while they all rake in millions, Hollywood script writers advancing the leftist agenda by incorporating liberal fabrications into their stories; all of these are corrupting our ignorant youth to pervert our society through deception, indoctrination, and misrepresentation of righteous truth.  The Democrat propaganda machine is what inspired Joseph Goebbels and he would be awestruck by how dominant the Left has become in the world today.  America is so suffering so much critical backwards liberal thinking that the media is actually giving credence to the Nazi Left protesting against the Right as being the fascists.

How Leftarts are ruining America’s superheroes and entertainment

“Supergirl’s” first episode of her second season that aired right after the November election had the heroine meet the new president and gush about how happy she was to have a woman president.  She then remarks “I don’t know how anyone could vote for that other guy.”  black-ish aired an episode for MLK Day about how mortified they are that Trump is going to be president and expressed their delusional belief that he will reinstate slavery.  Madam Secretary, Designated Survivor, and most other television shows have all gone rogue with scripts condemning the Right by portraying leftist ideology as true and righteous.  They act as if climate change caused by man’s carbon emissions is a real thing and that all life on the planet will be extinguished if they don’t put a stop to coal and cars and air conditioners and refrigerators and that electing liberal Democrats will save the planet, solve all ills, correct all wrongs, and make the world better when all liberal socialism has ever done is bring misery and death. 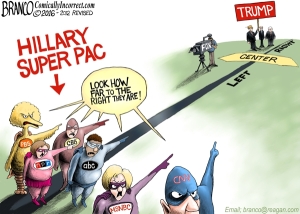 (Have you ever noticed that it is always the leftists who believe the Earth is overpopulated by human beings who are the world’s virus that must be eliminated?  Then they call the Right fascists who want to kill everyone.  Samuel L. Jackson portrayed one such loon in “Kingsman,” and you have to wonder if he actually believed he was playing the part of a rightwinger rather than a leftist loon when you listen to him talk about Republicans.  This is why liberals pretending to be heroes is always a tragedy because they are the antithesis of heroic.  What they say they believe is not what they do.  Always look at the hands, not the mouth.)

The series Quantico (which I watch strictly because Priyanka Chopra (WOW!)) has a new theme, not about stopping terrorists from outside America, but those within our own intelligence agencies.  These “anarchists want to go back to the old ways.”  Just as Obama and the Democrats don’t want their advances in the transformation of America into a socialist dictatorship to be undone by Trump, these producers want to indoctrinate America’s ignorant, oblivious youth into believing that the government, when run by Republicans, is the problem.  They don’t want us to go back to “the bad days” of an American capitalist republic, but to advance their cause of making themselves all powerful.  In other words they want to continue having the government spying on and investigating the TEA Party rather than Islamic jihadis.

An episode of Conviction had one of the lead’s aides confront a white racist in prison who was cleared of the crime of which he was convicted.  The aide told another inmate a lie to start a fight and get the man convicted in prison so he would remain behind bars.  This is how leftists operate.  They are the bigots and control freaks who judge others and convict them on their beliefs with which they disagree rather than their actions.  Personally, I would rather deal with an honest racist like David Duke than a deceitful racist like Barack Obama.  An honest man will have an honest discussion and can be brought about to a better conclusion when presented with the honest truth.  A pathological liar will never be turned from his ideology by any facts because he cannot recognize the truth.  They are without a moral compass.  They do not debate the facts, they live on dogma.  Even a series like Homeland, in which the star is an eccentric terrorist hunter, may have gone off the rails in its new season.  Hopefully, the character is infiltrating the Islamic refugee system to expose their importing jihadis and not actually being turned. 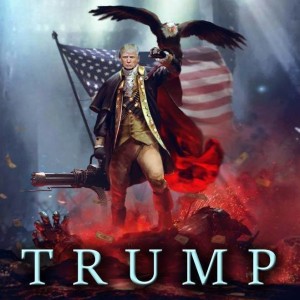 This is where Donald Trump stands out as an honest man who says what he thinks.  Even though the Left would like to destroy him for being politically incorrect, Trump is showing Republicans who have always collapsed under the least criticism how to confront and overcome liberal lies.  President Bush was denigrated as being illegitimate and smeared, but never fought back.  He allowed leftist propaganda to grow until his legacy was destroyed leading to the country stupidly elected a lying Moslem to be leader of the free world and today’s world is the result.  Pray that the Trump revolution will be an American revolution to stand up with courage and fight back, debunk liberal lies, defeat leftists with their social justice fascism and projection of their Nazism onto the patriots of the republic, and make America as great as she should be.

Trump will never be president said a bunch of fools

Show me a liberal icon, a hero of black culture, or a leader among Democrats or RINOs, and I’ll show you a self-serving liar who is the personification of corruption.

Leftists corrupt all the touch:

If liberals made their own superheroes

This site is my opinion only and is unpaid. I am a retired Paramedic/Firefighter with 25 years of service in the City of Dallas Fire Dept. I have a B.A. degree in Journalism, and A.A. degrees in Military Science and History. I have spent my life studying military history, world history, American history, science, current events, and politics making me a qualified PhD, Senior Fellow of the Limbaugh Institute, and tenured Professor Emeritus for Advanced Conservative Studies. 😄 It is my hope that readers can gain some knowledge and wisdom from my articles.
View all posts by dustyk103 →
This entry was posted in Politics and tagged Barack Obama, Culture corruption, Democrat media propaganda, Democrats, Donald Trump, Education, Indoctrination, Leftist ideology, Liberalism. Bookmark the permalink.