Over 200 years of peaceful transfers of power ends tomorrow.  The Left says Trump did not legitimately win the election.  Today’s blacklisters are the communists America tried to root out in the 50s.  Here is all the proof that the Leftists are the totalitarian socialist fascists who deal in deception and lies.

Leftarts are saying Donald Trump is not a legitimate president.  They say he did not legitimately win the election based on the popular vote – even though Hillary lost every battleground state and then some.  Rush Limbaugh made a perfect analogy of how the electoral college works and the rules of the election by comparing it to the 1960 World Series.  The Pittsburgh Pirates won 4 of 7 games and the title, but the New York Yankees scored 55-27 total runs.  The title is not based on who scores the most runs in seven games, but who wins the most games.  Pitt won four of the games by a small margin, but the Yankees ran up the score in the games they won.  Trump won the states, but California, New York, Illinois, and Virginia ran up the vote tallies in their states with bogus votes from illegals and felons and fraud.  (Detroit was caught yielding a phony tally for Hillary thanks to Jill Stein demanding a recount, and that’s just one city.)

That’s how leftists defraud the people, but it doesn’t matter because America is not a democracy.  The Founders made America a republic because democracies always fall to their own corruption.  Leftarts cannot face reality.  America is not a democracy, but a republic.  The presidential election is not a contest of votes, but a contest of states.  Just because states like California can stuff the ballot box by allowing illegals to vote in American elections in violation of federal law does not mean their votes should count.  Donald Trump did not have to win the majority of votes, but the majority of states, and he won six out of seven battleground states plus three more that were not on the Democrat’s radar! 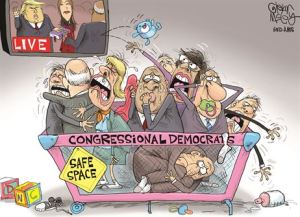 But the Left says the election results are still illegitimate because they claim Russia hacked the election to influence voters against Hillary – even though all they are accused of doing is exposing Podesta’s emails in which the DNC detailed herself w they screwed Bernie Sanders out of the nomination.  They also say FBI Director Comey tainted the election by reopening the investigation into Hillary’s email violations of national security – even though he had already provided proof she had done so.  These people who curse Russia as influence peddling in an America election had no problem with Obama trying to oust Israeli PM Netanyahu or stopping Brexit.  When the shoe is on the other foot they are the world’s greatest whiners.  Even so, they have no moral comprehension of Middle America’s disgust with Washington corruption the Left embraces.

Since losing the election, leftists have resorted to a dozen schemes to sabotage Trump and assassinate him either physically or via media propaganda.  The degree of their hateful insanity is only beginning to manifest in their actions.  Democrats believe Obama has led them to the point of being on the verge of establishing them as the One Party rulers of America and fundamentally transforming the nation into their socialist banana republic plaything.  Trump has not only spoiled that dream, but is also raining on the Republican’s parade to work with Democrats for their own financial benefit, RINOs like McCain who aid the Democrats in their efforts.

Drain the swamp of Washington corruption

CIA leaks to the media are proof that democrat operatives remain in the government to sabotage Trump’s efforts to repair the nation.  There should be no leftists anywhere in our government from the president down to teachers.  Hopefully, President Trump will make it a priority to eliminate America haters from positions of power.  Anyone who believes American is the problem in the world rather than the solution has no place in America teaching Americans or leading this nation. 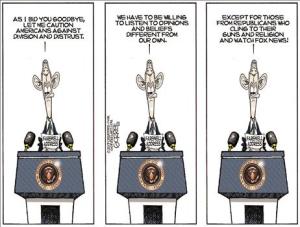 Obama is the antithesis of an American.  He was raised in Indonesia as a Moslem and educated as a Communist.  His actions have been to manage America’s decline.  The people whom he put into position of power were academics with no real world achievements, only ideas of how to make socialism work – which it never has because it must be inflicted on the people by force.  Even his CIA Director Brennan supported communism in his youth and reportedly converted to Islam under Obama.

As Trump prepares to be inaugurated as the 45th President and restore the republic, thereby bursting the bubble of the socialist Left that strove to impose socialism, Islam, and totalitarian fascism on the American people.  They hire “protesters” to scream ‘fascists’ at the Republicans who will restore freedom, while the Congressional Black Caucus sets out to destroy any blacks who stray from the Democrat Plantation.  Trump’s first order must be to conduct an extermination of all the leftist cockroaches that infest the government.  These people do not belong in America, let alone in control in government.  The Left says Trump is not a legitimate president.  I say Democrats are not legitimate Americans.

Donald Trump ready to go to work for America

America has been corrupted by the Left to turn from God, morality, and righteousness.  Disbelief in God is not enlightenment.  Believing Man is the center of the universe and his own moral authority is not progress.  Liberals are backwards.

The Left is the root of corruption.  They are the socialists, fascists, communists, Nazis, Islamists, and totalitarians.  Rosie O’Donnell proves that the Left are the Nazi fascists, while Mark Wahlberg proves that the Right is righteous.  She calls for Martial Law to stop Trump from becoming president because of the false charges liberals made against him, but gives Hillary a pass on her proven crimes and endorse Obama’s treason betraying his Oath of Office to uphold and defend the Constitution and American law.  This is how the Left gains and keeps control – through totalitarian socialist fascism.

O’Donnell calls on police to institute Martial Law against Trump

America is divided between the Right and Left, Republicans and Democrats, free republic or socialist dictatorship.  There is no working together, there is no unity, there is no compromise.  God and Satan cannot occupy the same church together.

Like Christians who invite Islamists to their church for anything other than teaching them about Christ betray Jesus, Americans who embrace communist socialism betray the Constitution.  Muhammad rejected Christ and asking a Moslem to teach Islam in a Christian church is asking his congregation to love Satan and follow him.  Jesus never said to love Satan or invite him to rule.  Islam is the ultimate form of socialism – their utopia in which all the people are the same and bow to their leaders.  Atheists may whine they have a “fantasy” god, but the god of Islam keeps their people in submission via the brainwashing taught by Muhammad.  Teaching communism in American schools is no different.

Democrats are inviting Islam into the West where they are raping women and committing terror attacks on the innocent.  This is the result of appeasement and betrayal.  America needs to not only reject Democrats, but eject them!  Will Smith declared that all Trump supporters should leave America.  America was not built by black racists who have joined with the white racist totalitarians of the Democrat Party, but by white Christian republicans.  The ones who need to be ejected are not the patriots, but those who hate this nation and want to transform it into a corrupt hellhole that worships the Golden Calf.

This site is my opinion only and is unpaid. I am a retired Paramedic/Firefighter with 25 years of service in the City of Dallas Fire Dept. I have a B.A. degree in Journalism, and A.A. degrees in Military Science and History. I have spent my life studying military history, world history, American history, science, current events, and politics making me a qualified PhD, Senior Fellow of the Limbaugh Institute, and tenured Professor Emeritus for Advanced Conservative Studies. 😄 It is my hope that readers can gain some knowledge and wisdom from my articles.
View all posts by dustyk103 →
This entry was posted in Politics and tagged America's Nazis, Capitalism, Democrat propaganda, Democratic socialists, Democrats not legitimate Americans, Donald Trump, Left wants Martial Law, LEFTARTS, Leftist ideology, Socialism, Trump not legitimate president. Bookmark the permalink.