Vote Hillary to save America from BLM terrorists! 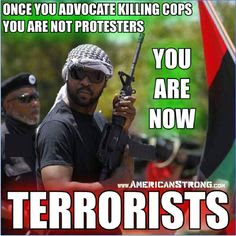 Hillary courts the police vote after sicking BLM terrorists on them.

Hillary is courting the police votes by promising to send Obama’s pitchforked peasants back to their hovels.  Oh, wait, it’s not peasants, it’s criminals and they’re not going to go away quietly.  Instead, they’re launching an all-out war against the police!

Democrats are finding that once they unleash the beasts that putting them back in their cages isn’t so easy.  After spending the last couple of years stirring up their people to hate police, hate white people, hate the rich, hate Republicans, Democrats are asking the people against whom they launched their terrorists to give them their votes!  If this isn’t a shakedown then what is?

At every incident in which police shot criminals or terrorists shot police, Obama came out and blamed the police as racists.  Now they are getting desperate to stop the Trump Train and finding out that their rabid dogs aren’t so easy to bring to heel.  Like letting the genie out of the bottle, once you spew sh*t out of your mouth it’s pretty tough to put it back in.

Obama called down the thunder, now pray the lightning strikes and Democrats burn.  Trump has entered campaign mode calming his liberal-style rhetoric just as Hillary is has begun her campaign of conservative-style rhetoric.  Pray Trump wins with a crushing Republican victory over the leftwing terrorists that Obama invited to destroy America.

Trump the “law and order” president

This site is my opinion only and is unpaid. I am a retired Paramedic/Firefighter with 25 years of service in the City of Dallas Fire Dept. I have a B.A. degree in Journalism, and A.A. degrees in Military Science and History. I have spent my life studying military history, world history, American history, science, current events, and politics making me a qualified PhD, Senior Fellow of the Limbaugh Institute, and tenured Professor Emeritus for Advanced Conservative Studies. 😄 It is my hope that readers can gain some knowledge and wisdom from my articles.
View all posts by dustyk103 →
This entry was posted in Election 2016 and tagged 2016 Presidential Campaign, Black lives matter, Donald Trump, Hillary Clinton, Illegal Immigrants, Islam, Jihad, Leftwingnut socialist terrorism, Sharia, Terrorism. Bookmark the permalink.

2 Responses to Vote Hillary to save America from BLM terrorists!