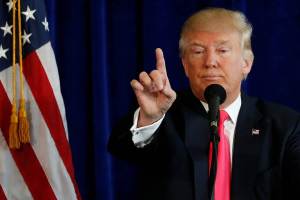 Trump steps on Hillary’s big moment and the Left tries to turn his joke about Hillary’s email breach and make Trump the security risk.

Donald Trump stole Democrat’s thunder and rained on their parade by having a press conference and the primary subject became about Hillary’s email scandal.  The Dems and their RINO allies are apoplectic over Trump asking Russia to find her illegally deleted emails.  They are screaming how it is now he who is the one violating national security.  If Hill’s emails were all personal and not classified what are they upset about?

The fact is that even if these emails proved that Clinton and Obama have been colluding with the Muslim Brotherhood at America’s expense the liberal media would still curse Trump and vote for her.  The two-faced leftwing media has been giving Hillary a pass for her criminal violations of National Security from the start.  The liberal media’s ability to embrace lies like Bill’s fairy tale love story, ignoring the truth like his constant cheating on his wife and her destroying all the women he sexually molested, is why the American Left is dysfunctional psychotics.

Democrats didn’t let Michael Brown’s mother speak to perpetuate the “Hands up don’t shoot lie” at the convention.  At the same time Baltimore’s Marilyn Mosby dropped all charges against remaining police charged with murdering Freddie Gray vacating Democrats latest scheme to punish police for non-existent racism.  Of course, that didn’t stop her from blaming Republicans for a crime that no one committed.

Obama & Co. took aim at Trump during the convention which has been more a smearfest than an exhibition of Democrat policies that they keep hidden.

Biden: “He’s trying to tell us he cares about the Middle Class.  Give me a break!  That’s a bunch of malarkey.”  “He has no clue about what makes America great.  Actually he has no clue period.”

Obama: “Our power doesn’t come from some self-declared Savior.”  “We don’t look to be ruled.”  “There is nobody more qualified than Hillary Clinton to be president of the United States.”

It is comical to listen to Democrats say Trump doesn’t have a clue how to accomplish anything and their vacuous followers cheer.  It is downright hysterical when Obama – the Democrat Messiah – says Americans don’t want a “self-declared Savior.”  If nothing else, this entire circus will prove beyond doubt that Democrats beliefs are so dysfunctional that their faith in Hillary will not see the glass ceiling as she breaks through, but fall and slice them to ribbons with the shards of their million lies.

This site is my opinion only and is unpaid. I am a retired Paramedic/Firefighter with 25 years of service in the City of Dallas Fire Dept. I have a B.A. degree in Journalism, and A.A. degrees in Military Science and History. I have spent my life studying military history, world history, American history, science, current events, and politics making me a qualified PhD, Senior Fellow of the Limbaugh Institute, and tenured Professor Emeritus for Advanced Conservative Studies. 😄 It is my hope that readers can gain some knowledge and wisdom from my articles.
View all posts by dustyk103 →
This entry was posted in Election 2016 and tagged Democratic Convention, Democrats go berserk, Donald Trump, Hillary Clinton, Hillary's email security breech, Trump rains on Hillary's parade, Trump steals Hillary's thunder, Wikileaks. Bookmark the permalink.