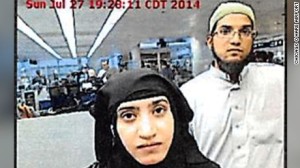 FBI director reveals that Obama’s policies invited Moslem jihadis into the USA to murder Americans.  Then Obama says Americans must not judge Moslems or hold Islam responsible for the Jihad.  Trump is the only man talking sense to protect Americans.

Liberals and moderates, Democrats and Republicans, are all piling on Donald Trump for saying the most sensible thing any candidate has said, and for having the balls of steel necessary to spit this in the face of the leftwing media character assassins.  The San Bernardino murderers have been exposed that they were jihadi wannabes before they ever came to America.  And you want to leave an open door to all Moslems because why?  These people were invited right in by Obama’s open door policy to Moslems, Farook was even born here to immigrant parents, and Americans are suffering for it.

Why do you keep lying to us about all the jihadi attacks that have taken place under the Obama Regime?  You keep treating Republicans as if they are the stupid cows of the Democrat Party and we believe it when you assholes say, “its workplace violence.  Islam is peace.”  Fourteen hundred years of history says you’re a liar!  Dozens of jihadi terror attacks say you’re a bunch of fucking idiots!

You think conservatives are stupid, liars, mind-numbed robots, bigots, sexist, homophobes, haters, Islamophobes, xenophobes, and racists.  You’re the flaming jackasses inviting jihadis into America to kill Americans!  You’re the blithering idiots who believe they are the intellectual elites and think the most destructive ideology in history, totalitarian socialism, is good!

The two-thirds of Americans who are intelligent know that the BS you serve up to them, global warming, Islam, BLM, ObamaCare, illegal aliens, and the deficit economy recognize that all are bloated loads of feces.  It’s a crime they don’t all vote or that Democrat voter fraud successfully disenfranchises them.  You think we don’t know you are deliberately deceiving us?

Obama is either galactically stupid or acting treacherously while deceiving the people about Islam.  Raise your hand if you think he’s stupid?  He even said he would side with Islam against America!  WTF?

Obama’s speech tells Americans not to blame Moslems for jihadis

Obama says guns to blame for San Bernardino, not terrorists

This site is my opinion only and is unpaid. I am a retired Paramedic/Firefighter with 25 years of service in the City of Dallas Fire Dept. I have a B.A. degree in Journalism, and A.A. degrees in Military Science and History. I have spent my life studying military history, world history, American history, science, current events, and politics making me a qualified PhD, Senior Fellow of the Limbaugh Institute, and tenured Professor Emeritus for Advanced Conservative Studies. 😄 It is my hope that readers can gain some knowledge and wisdom from my articles.
View all posts by dustyk103 →
This entry was posted in Election 2016, Islamism and tagged Barack Obama, Donald Trump, FBI San Bernardino report, Islam, Islamic Jihadis, Islamic terrorism, Jihad, Mass shootings, Moslem immigrants, Muslim immigrants, San Bernardino jihadis. Bookmark the permalink.