ISIS growing because of lack of jobs according to Obama 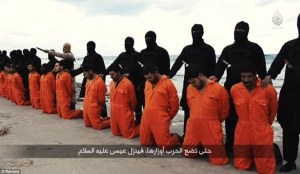 Islamic Jihadis conduct mass beheading of Egyptian Christians, and the Obama State Department makes a statement that they are not Jihadis, just jobless people with nothing better to do that we should treat with kindness.

Saying that ISIS is not Islamic, that they are just jobless Arabs without prospects who turn to crime, and that they are not following the teachings of Mohammad is the reasoning of an unintelligent mind.  Moslems who say ISIS is not Islamic, then go to their mosques and chant, “Death to America!  Death to Israel!” isn’t fooling anyone, and neither is Barack Hussein Obama.  The president who wants to treat these mass murdering rapists as common street thugs to be tried in civilian criminal courts rather than as foreign enemy soldiers is insane.

Even more insane are the people who believe this.  People who believe that making a connection between the teachings of Mohammad the First Jihadi, fourteen hundred years of warmongering, slavery, and oppression, and the mindless chanting in mosques of Jihad being taught by Imams today is wrong.  The solution to crushing the Islamic State is not giving them jobs.

The solution to eliminating Jihad is using the force necessary to kill all Jihadis, overthrowing the Imams that teach Islam, and abolishing the teachings of Mohammad.  Moslems who truly want a religion of peace would turn to Christianity or Buddhism whose teachings are of nothing but peace.  Those who do not will become Jihadis to serve their god and destroy all other people who will not submit to Islam.

ISIS exists because 70 million Americans voted for Obama as president.  Obama used the power of the presidency to support the Muslim Brotherhood.  And the Muslim Brotherhood revolted throughout the Middle East with the aid of American power to put Jihadis in power.  Where they are not in power they are in the process of overthrowing governments, murdering kafirs and infidels, and setting the Middle East on fire.

Obama will not acknowledge that they are Jihadis, will not name them Islamists, will not name their victims as Christians, Jews, and Moslems who will not participate in the Jihad, and will not bring the full power of America against them.  Instead he is concentrating on TEA Party “extremists” and the global warming fraud as the greatest threats to America’s future.  When they won’t name the enemy they are saying they don’t know who they are or in what they believe, so how are they going to form a strategy to defeat them?

Jesus did not say this talking about rapists and murderers.  He was speaking about people who are just a**holes.

Foreign leader asks why America fails in every war

Charging racism in the murder of Moslems, Obama speaks stupidly

This site is my opinion only and is unpaid. I am a retired Paramedic/Firefighter with 25 years of service in the City of Dallas Fire Dept. I have a B.A. degree in Journalism, and A.A. degrees in Military Science and History. I have spent my life studying military history, world history, American history, science, current events, and politics making me a qualified PhD, Senior Fellow of the Limbaugh Institute, and tenured Professor for Advanced Conservative Studies. 😄 It is my hope that readers can gain some knowledge and wisdom from my articles.
View all posts by dustyk103 →
This entry was posted in Islamism and tagged Barack Obama, Christians, Crime, ISIS, Islam, Jihad, Mohammed, Moslems, Muslims. Bookmark the permalink.