The Impeachment Farce for Dummies

Impeachment is an indictment, NOT a conviction!  Here is your lesson in civics for ignorant liberal fools.  America’s legal system is based on law enforcement investigating crimes, Grand Juries indicting people for those crimes based on their evidence, prosecutors presenting the case and defenders presenting their own facts refuting the prosecution, a judge adjudicating to make certain the law is followed, and a jury rendering a verdict.  In Congress in accordance with the Constitution, the House Judiciary Committee is the investigator, and the House of Representatives, headed by Pelosi, is the Grand Jury.  From there the case is presented to the Senate.  In the Senate, which is the courtroom, the House prosecution presents their facts in the Articles of Impeachment. The Senate holds the trial, the Chief Justice of the Supreme Court is the judge, and the Senate is the jury.

Pelosi is withholding the indictment until the Republican Senate agrees to give Democrats the lead as prosecution, judge, jury, and executioners, and then have the jury also be investigators into additional evidence and render a verdict based on a different set of facts than those on which the accused was indicted/impeached.  One other factor which should be noted is that, like wives cannot be forced to testify against their husbands, the president’s staff cannot be forced to testify against the president.  That Democrats are running 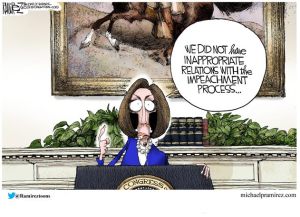 roughshod over American law is how liberal socialist Democrats stack the deck of their kangaroo courts to railroad the innocent – and Republicans will have none of it.

Democrats have impeached President Trump.  Liberals say Republicans would impeach him “if they paid attention to the facts.”  This is how dysfunctional backwards thinking liberals act believing they know any facts.  In the Articles of Impeachment, Democrats charged President Trump with Abuse of Power for not bowing to Democrat’s will.  When he fired Comey and threatened to fire Mueller, he announced that Article II of the Constitution gives him the power to do what he wants with their jobs.  Democrats say that he meant he could do anything he wants as president as though he is a ruling monarch!  He spoke the words that they take completely out of context making their claim an outright lie!  Their second charge of his Obstruction of Congress is again his not submitting to Democrat’s will to afford them access to his personal affairs.  The President of the United States does NOT serve at the will of the Congress, but of the people!!!

If you engage a liberal in debate over these facts, because they are devoid of knowledge or intellect, they become angry and incensed as you prove how little they know.  They only know the lies that CNN has told them and believe that FOX has only told us lies that we believe.  How you overcome this kind of brainwashed, witless faith in their own stupidity is next to impossible.  These are the people who believe they are geniuses of science believing in global warming extinction and can’t tell how many actual human sexes there are.  These same people believe Christian faith is mindless.  The difference between leftist Islamic/atheist faith and righteous Christian faith is that the left’s faith is born of lies

repeated ad Infinitum in denial of the truth, while the right’s faith is born of love.  Democrat’s idea of their measures of high crimes for violating their will have proven themselves to be no different than the Salem Witch Trials, the Islamic Jihad, the Spanish Inquisition, and the Nazi/Communist regimes of the world.

The Constitution lays out the grounds for impeachment quite clearly.  Committing a “high crime,” i.e. what is known today as a felony which ranges from murder down to perjury.  While the murders committed by the Clintons, such as Epstein’s, can’t be proven, Bill Clinton’s perjury and witness tampering was proven.  Another issue is if the president accepts, not offers, bribes by foreign powers.  (Bribing foreign powers is perfectly acceptable in matters of state.)  Obama and Biden certainly took bribes from Ukraine, China, and many other nations.  But aside from Biden stupidly bragging about it, finding the proof requires the deepest of dives into the finances that the DoJ can’t do when these traitorous criminals keep their money offshore.  Obama’s net worth went from $1.3 million, when Americans stupidly elected a Moslem communist to be leader of the free world, to $135 million.  He didn’t make that through his pay or investments on Wall Street.

Donald Trump is already a billionaire.  There is no bribing him, no buying him, and no need for him to take anything from anyone just as he refuses to take the (to him) paltry

salary of a president but donates this money.  He just tells foreign leaders to do the right thing as he does.  Democrat’s only hope is to dupe as many people as possible, to slander Trump by lying about what he says and does, to smear him for making off-color jokes, (which is pathetically laughable compared to Democrats who dance and spit on the graves of Republicans like Bush 41’s wife Barbara), and by blocking his great legislations such as the Canada-Mexico trade agreement.  Democrats writing in changes so they could shake down America’s top two trading partners should be a crime in itself.

Like the Russian collusion fraud, the Mueller fraud, and the Ukraine fraud, Americans can expect Democrat’s impeachment fraud to take up their air in Washington, while President Trump continues to suck the wind out of their sails by continuing his awesome efforts to make America great again despite their efforts to tear it down.  This impeachment isn’t about a rogue president violating the Constitution.  It’s about rogue Democrats in Congress hating Republicans and the leader they chose who defies their deep state democratic socialist dreams to overthrow the Constitution.  Obama, Democrat’s Moslem communist leader, showed them how to be rogue president dictators with his own and his phone to make laws over the Congress that the people elected to restrict him.  Paul Ryan was the wimpy Speaker who let Obama stomp all over the Constitution.  Until Pelosi submits the articles to the Senate there is no impeachment.  Grand Juries don’t get to tell the jury they must convict before the indictment is submitted to trial.

All Roads Lead to Putin? – BS!

This site is my opinion only and is unpaid. I am a retired Paramedic/Firefighter with 25 years of service in the City of Dallas Fire Dept. I have a B.A. degree in Journalism, and A.A. degrees in Military Science and History. I have spent my life studying military history, world history, American history, science, current events, and politics making me a qualified PhD, Senior Fellow of the Limbaugh Institute, and tenured Professor Emeritus for Advanced Conservative Studies. 😄 It is my hope that readers can gain some knowledge and wisdom from my articles.
View all posts by dustyk103 →
This entry was posted in Democratic socialism, Elections 2020 and tagged Donald Trump, Impeachment for dummies, Impeachment is Indictment not conviction, Trump Abuse of Power, Trump Impeachment, Trump not really impeached, Trump Obstruction of Congress. Bookmark the permalink.