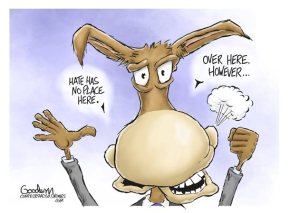 Fake bombs, fake news, fake morality.  This is a study in leftist victimology.  Democrats act as if there has never been a recorded video made of their hateful calls to violence.  They act as if there are recordings of Trump doing so.  Only the most oblivious, vacuous liberals would believe what they say because they are ignorant of what they do.  The left is the soul of deception and the heart of bigotry.  They slander all Republicans as racists when they own the party of racism.  How stupid must people be to believe Democrats have always been the protectors of minorities?  Only the dumbest of people could believe that Lincoln was a Democrat.  It was just days ago that Hillary said Democrats shouldn’t even be civil to Republicans they were assaulting, and following these fake bombs now calls for the country to unite – behind Democrats. 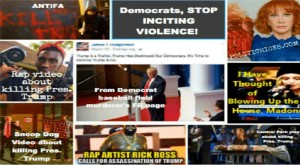 [Addendum – bomber suspect has been arrested and identified as Cesar Sayoc a Florida Democrat.  He was arrested for mailing fake bombs to Democrats that CNN has titled “Trump targets.”  These leftwing hacks should abase themselves in apology before President Trump and ALL Republicans.  They have earned our scorn as fake news!]

Hannity plays Two-Faced Democrats back to back beside themselves 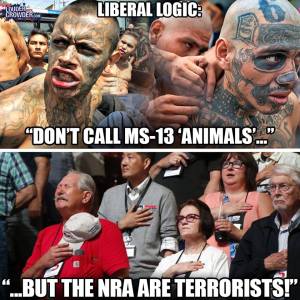 Democrats are struggling to overturn the Republican tsunami they know is coming in Midterms.  They have been desperately ginning up hate in their rabid base, promoting violence against Republicans, and calling for “incivility” that has resulted in assaults and numerous murders of Republicans and police as “racist oppressors.”  Then they have the utmost gall to say they are for peace and civility after they send themselves fake bombs to declare their fake outrage against the president they have been wishing would be assassinated from the day he was elected on the basis of their fake charge of racism.  There are actually hate-filled liberals who believe their own lies about Trump Republicans. 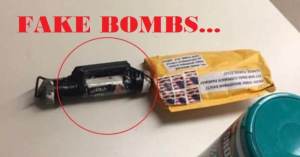 Democrat media condemn and scorn Republicans for jumping to conclusions that the bomber is a Democrat, probably a retarded Antifa fanatic, who sent the bombs in order to depress Republican voter turnout and incite Democrats.  Even as they condemn Republicans for making conclusions without a perpetrator they, with less than zero evidence, condemn Trump and all Republicans for the bombs as being fascists inciting violence.  It is the sick, two-faced pathology of leftism.  It’s not like they haven’t spent the past few years conducting riots and police murders.  It’s not like, from the day Trump was elected, they didn’t start talking about assassinating him.  Madonna saying, “I’ve thought an awful lot about blowing up the White House.”  Johnny Depp saying, “When was the last time an actor assassinated a president?”

Left blames Trump for bombs and tells Republicans to shut up

Hillary, Obama, and Democrat Congressmen and women have been exhorting their followers to attack Trump and his supporters.  The leftists say Trump is Hitler and depicted his assassination in pictures and even videos, that call Republican Christian conservatives Nazis to justify attacking them, accosting them in restaurants, burning cars with Trump stickers on them, and vandalizing the property of Republicans.  They declare that all the violence in America is due to Republicans and not to their own vacuous, rabid, insane base. 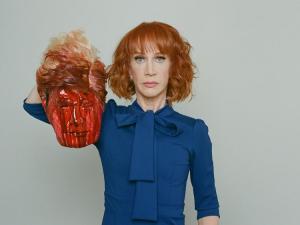 These people are blind to their own duplicity and bigotry.  They are a tone-deaf chorus at an opera of the macabre.  Now these people that have been urging violence for two years after these fake bombs make fake calls for unity out of the other side of their faces.  But they don’t call for peace with Republicans.  Rather they call for the people to unite behind Democrats as the victims!  TWO-FACED psychotic leftists pretending to be the victims when they are the perpetrators the way every criminal, thief, rapist, and murderer in history justifies their actions! 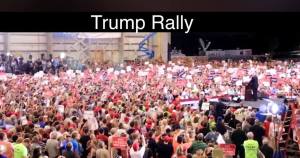 The results of the midterms are going to prove to the world how many millions of people there are in America who hate this nation, vapidly believe whatever they are told to believe, and who prove their intentions are evil and that stupidity is more infinite than the universe.  The left is out of excuses and completely exposed as the anti-God, anti-America, anti-Christian ideology they have always been.  There are still holdouts who believe this is a battle between the far left that has hijacked the Democratic Party and the far right that has hijacked the Republican Party.  They believe this on the basis of the leftist paradigm that the far left are Communists and the far right are Nazis.  You can create any paradigm you wish, but when examined theirs are easily ripped apart as false.

Left vs. Right – The true paradigm 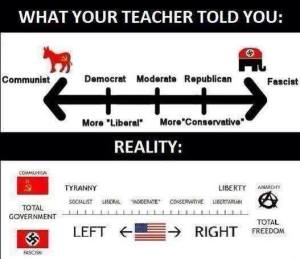 But the truth that both those socialist ideologies are leftists along with democratic socialism, racism, and bigotry is only understood by the righteous.  The true paradigm of humanity is that the far left is anti-God and the far right is Christian.  The far left believes in government control and slavery while the far right believes in liberty.  So long as ignorant people can be fooled into believing that Christians are evil there will always be two-faced deceivers who can dupe them.  While Republicans can produce hours of Democrats calling for violence against them along with actual acts of violence, no Democrat can produce one minute of Trump or Republicans doing the same as they claim he has done. 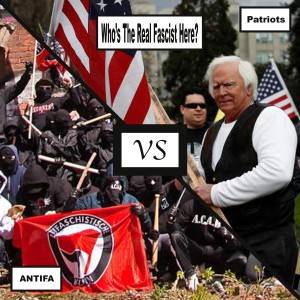 The emptiness of leftist rhetoric declaring Republicans to be Nazis is as vacant as Obama’s rhetoric promising them the Sun, the Moon, and the stars, and then driving them down the road to Hell.  Ginning up hate wasn’t working for them except with their maniacal base, so now they are trying to play the victim card for the sympathy vote.  How many Americans besides their fanatics do they believe will fall for this?  Democrats will now condemn everyone who votes against them as being Russian Commie Nazis filled with guiltless hate projecting their sociopathic insanity on the righteous.  Democrat liberalism remains the toxic ideology of deceivers and their dupes striving to retake power to rule America, and they are going to find themselves relegated back to the shadows from which they will throw bombs like they did in the early years. 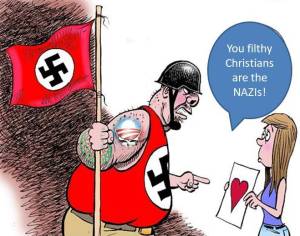 Migrant Army Marches Through Mexico Intent on Invading the USA 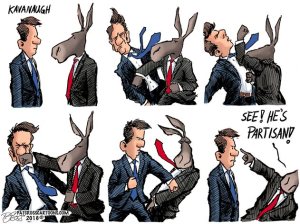 [Author’s Note: It is still unclear to the public what this person’s motives were.  Is he a disillusioned Obamaite who became a Trump supporter and now viscerally hates Democrats that he realizes have cheated him?  Or is he a Hillaryite who saw this as an opportunity to smear Republicans with his own false flag operation?  Either way the take away from this should be that he is a New York Democrat that is still behaving as a lunatic liberal leftist because his actions, whether he is for Trump or against him, are detrimental to Republicans.  That being the case he is more in the camp of Democrats than of Republicans, so the leftwing media’s smears of the right are all proven once again to be as bogus as their propaganda has always been.] 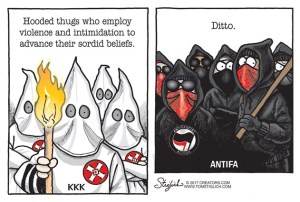 This site is my opinion only and is unpaid. I am a retired Paramedic/Firefighter with 25 years of service in the City of Dallas Fire Dept. I have a B.A. degree in Journalism, and A.A. degrees in Military Science and History. I have spent my life studying military history, world history, American history, science, current events, and politics making me a qualified PhD, Senior Fellow of the Limbaugh Institute, and tenured Professor for Advanced Conservative Studies. 😄 It is my hope that readers can gain some knowledge and wisdom from my articles.
View all posts by dustyk103 →
This entry was posted in Elections 2018 & 2020, Politics and tagged American Nazis, Conservatism vs. Liberalism, Democrat hate, Democrat's criminal mentality, Donald Trump, Fascism in America, Hillary Clinton, Leftist Victimology, Liberal Fascism, Republican Nazis, Right vs. Left, Two-Faced Democrats. Bookmark the permalink.