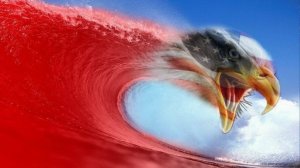 By what measure do Democrat senators and congressmen believe they live up to their high titles?  Dianne Feinstein presents false accusations against a Republican judge after his confirmation hearings.  Maxine Waters calls for violence against Republicans.  Barack Obama takes credit for President Trump’s making America’s economy great.  And the GOP does NOTHING!  These past two weeks have been more exasperating, more frustrating, more galling, more aggravating, and more infuriating than the last four years.

Obama has incited his OfA army of Nazis to riot in the streets following his dictatorial acts to bring down America’s economy.  Meanwhile, his Demonrat cohorts have spied on the Trump campaign, have obstructed, undermined, and sabotaged his administration from within, and incited insurrection in America all at his direction.  They have sanctioned racism and fascism against American patriots.  And the GOP does NOTHING!  Republican voters have reached a boiling point and the kettle is about to explode all over the pot!

The hearings for a Supreme Court Justice should be an event of dignity and examination, but Democrats have turned it into a circus of monkeys shouting and clowns performing making it a spectacle of lies, smears, slanders, and false allegations.  Brett Kavanaugh should be given the respect of a man of great integrity and accomplishment, and instead Demonrats did far more than just rain on his parade.  The party that lauded Bill Clinton for his multiple rapes and molestations of women has maligned and defamed a man whose boots Clinton is not fit to lick with a festival of fabrications. 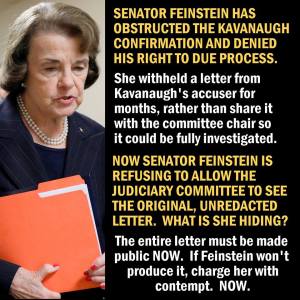 Dianne Feinstein, who does not deserve the title of senator, still withholds the letter she has had for months by which she slanders Kavanaugh.  Her “witness” refuses to testify under oath!  Chuck Grassley has bent over backwards to accommodate their smears, and now he is just bending over for them.  WTF is wrong with you, senator, that you not only allow, but oblige these pathological liars?  Why haven’t you taken action against Feinstein for her violations?  Is it because the Senate rules allow its members to lie, cheat, and steal from the people?

And what about Maxine Waters?  This low brow fool of subhuman intellect is out on the streets encouraging her followers to attack Trump supporters!  She says she is fighting racism by being a racist against white men.  She says she is fighting fascism by exhorting her people to be Nazi thugs.  Hitler would be proud of the duplicity and propaganda coup that Demonrats have wrought.  The dregs of America are rising up to attack the people and murder police, and what is the GOP doing about it?  Sitting on their thumbs and spinning!

Jeff Sessions is supposed to be prosecuting the worst crime and corruption in the nation, and yet he sits on his thumb and spins!  Every Republican who stands up and shouts for justice is being thwarted from inside the Trump administration by his supposed supporters.  Wolves in sheep’s clothing come in all colors of wool.  The people have had enough!  These Demonrats should be tarred and feathered and run out of town on a rail.  We, the Republicans voters who selected Donald J. Trump to lead this nation, have had enough!  Get on board or get out of the way or get run over. 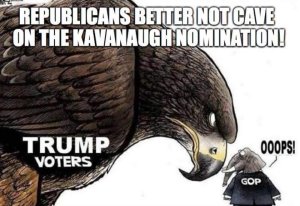 The Trump Train is going to rocket down the tracks to crush the wicked and make America great again.  And we are going to have better Republicans these next election cycles.  President Trump needs a Congress that stands with him to lift the American people back to greatness.  Those who believe they are too good to raise the people and would rather ally with Demonrats need to go!  And if it takes an explosion of righteous wrath to destroy the violent Demonrats then American patriots stand ready to answer the call!

Americans do NOT want Republicans who will work with Democrats!  We want Republicans who will work against Democrats because Democrats do not work for the people who love America.  They work for the people who hate America and want to destroy her and all her goodness.  The Democrat Party has always been the party of the elites who would rule over the masses.  That liberals are too ignorant and too deluded too understand this is the greatest dilemma this nation faces today.  And until Republicans begin holding Democrat criminals to account, especially those in government, this nation’s decline and fall is assured.

Fool Me Once, Twice, Three Times I’m Out!

Anatomy of Evil – the Demonization of Brett Kavanaugh and President Trump

This site is my opinion only and is unpaid. I am a retired Paramedic/Firefighter with 25 years of service in the City of Dallas Fire Dept. I have a B.A. degree in Journalism, and A.A. degrees in Military Science and History. I have spent my life studying military history, world history, American history, science, current events, and politics making me a qualified PhD, Senior Fellow of the Limbaugh Institute, and tenured Professor Emeritus for Advanced Conservative Studies. 😄 It is my hope that readers can gain some knowledge and wisdom from my articles.
View all posts by dustyk103 →
This entry was posted in Politics and tagged Brett Kavanaugh, Christine Blasey Ford, Democrat lies, Democrat media propaganda, Democrat racism, Demonrats Corruption, Diane Feinstein, Donald Trump, Leftist activists, Liberal Fascism, Maxine Waters, SCOTUS Hearings. Bookmark the permalink.