The Obama/Hillary Coup is coming unraveled in public.  Mueller, who has enjoyed violating the 4th Amendment rights of everyone on the Trump team with impunity during his witch-hunt, is being beset by the courts, Congress, and even his Russian victims.  The DoJ of Rosenstein and Sessions is being called to heel by their congressional overseers and they are straining with all their might against the leash.  The web that Obama has weaved to cover up his illegal FISA warrant to spy on the Trump campaign is on the verge of being thrown into Democrat voter’s faces.  What will the liberal pundits all say when the truth is waved in front of their lemmings?  Pay no attention to that man behind the curtain?

Never in American history has a former president taken action through a shadow government; lawless bureaucrats persecuting Republicans, a fascist army pretending they are opposing fascism, a group of criminals calling cops criminal racists, and foreign invaders demanding jobs and taxpayer benefits while stealing voting rights through their Democrat masters, until now with the advent of Obama’s Moslem socialist regime.  Kanye West has opened the eyes of many in the black community that only about 5% of blacks have understood.  Trump doubled that number and Kanye doubled them yet again to open their eyes to being modern day voluntary slaves on the Democrat welfare voter plantation.  Democrats are desperately recruiting foreigners to come to their states to obtain state sanctioned IDs that allow them to vote.  While the liberal media laughs and poo-poos the idea that anyone votes illegally they accuse Trump of having Russians hack the election to vote illegally.  The real crimes are all in and from the hands of Democrats.  The Founders were extremely wise to install the Electoral College so that states like California and New York could not stuff the ballot boxes with illegal votes to overwhelm the rest of the country.  If liberals had it their way they young teens they could more easily dupe would be voting alongside the invaders Democrats invited to replace their defecting negro slaves. 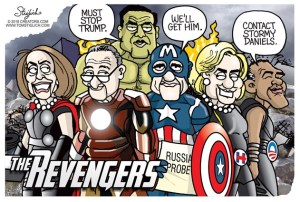 Mueller has crushed a number of Trump supporters like Gen. Flynn, driving them into bankruptcy to pay their legal bills against his unlimited federal bank account.  But now the FBI has been forced to turn over unredacted transcripts to Congress and it is being discovered that the redactions were not to protect national security, but to protect the conspiracies and crimes of Obama’s Deep State operatives in the FBI to railroad Trump associates.  Sessions and Rosenstein are on the verge of being held in Contempt of Congress for refusing to do the same for their congressional overseers.  Since when does any AG think he has a right not to answer to his boss?  The last was Obama’s AG Eric Holder who was the only AG in history to be held in contempt for refusing to provide documents regarding his Operation Fast & Furious.  Obama’s first great scandal of selling guns to Mexican drug lords was illegally covered up by his White House.  So when is anyone in government going to start tearing down Obama’s mythical house of cards that he had no scandals during his term and rip him a new one?  Obama’s subversives have been running roughshod over patriotic Americans and those patriots believe President Trump needs to take an axe to the lot of them!  So why isn’t he?  Why is Sessions, an avowed Trump supporter and Christian conservative, obstructing his efforts?  Could it be Sessions is just a slick talking snake in the grass like Obama?  A swamp rat in disguise?  A wolf in sheep’s clothing?

“It’s not what we say, but what we do that defines us.”

Some Republicans think it is better if Trump plays a victim to gain sympathy rather than go on the attack and be accused of bullying.  These would be the RINOs, Democrat allies, and NeverTrumpers.  I call BULLSH*T on that!  I voted for a WARRIOR, NOT a woman!  Playing the weenie is something McCain would do.  This farce, this persecution, this coup has gone on far too long.  One of the thirteen Russians that Mueller indicted for “interfering in the election” has stepped forward to declare their innocence and called on Mueller to put up or shut up!  The vaunted Democrat hack is back peddling so fast he’s about to break the chain.   Mueller is required to produce his evidence as part of discovery for the defense to prepare their case and he is refusing to do so and we all know why.  It is time for the Grand Inquisitor to face the guillotine like his predecessor Robespierre who severed many heads before his own rolled.  Those like Flynn who have suffered the loss of everything need to be taken under wing by Trump for their courage rather than left to suffer at the hands of Trump’s enemies.  America is not a banana republic that persecutes their defeated political opponents.  But it is not supposed to be a place where defeated political opponents persecute the victors, and certainly not a place where the vanquished get to wage a war of corruption and subterfuge, and sedition against the rightfully elected president with impunity.  Democrat crimes must be punished!  Trump already has his hands full with RINOs and NeverTrumpers, who would have rather had Hillary, obstructing his agenda.  The people have been 100% behind Trump’s agenda to undo Obamaism and make America great again.  They would all be 1000% behind him actually draining the Washington swamp of its establishment swamp rats.

AG Sessions may be held in Contempt of Congress

This site is my opinion only and is unpaid. I am a retired Paramedic/Firefighter with 25 years of service in the City of Dallas Fire Dept. I have a B.A. degree in Journalism, and A.A. degrees in Military Science and History. I have spent my life studying military history, world history, American history, science, current events, and politics making me a qualified PhD, Senior Fellow of the Limbaugh Institute, and tenured Professor Emeritus for Advanced Conservative Studies. 😄 It is my hope that readers can gain some knowledge and wisdom from my articles.
View all posts by dustyk103 →
This entry was posted in Politics and tagged Democrat Inquisition, Deputy AG Rosenstein, Donald Trump, Jeff Sessions, Mueller's Witch Hunt, Robert Mueller, Sessions Obstructing Congress, Washington Swamp Rats. Bookmark the permalink.