Hillary is still whining about losing claiming the Trump and his voters are 1850s Democrats working with the Russians.  The Democrat Party has not become “enlightened” since the Civil War.  They’ve become pathological liars, political deceivers preying on the ignorant naïveté of their dysfunctional followers to make them delusional, thus causing them to live in denial of the truth.  Democrat media constantly tries to portray Trump as an idiotic narcissistic fool with delusions of grandeur like the reality that is Barack Obama.  The closest they’ve come to a congressional election victory is a foolish young Marine who became a lawyer and chose the wrong party.  He pretended to be a Trump supporter eeking out Democrat’s first possible win (to date still tied) in a special election by duping some extremely gullible voters.  While the media sets their snares and launches their missiles at Trump he speeds by as their traps all blow up in their faces.  President Trump is proving to the be most honest, open, and honorable president putting him on a par with the greats on Mt. Rushmore and Ronaldus Magnus.  He has achieved more in his first term than any other president in the history of the country – especially the last century.  Democrats have nothing to offer against his policies that are making America great again except their hate and lies.  Donald Trump is making America great again by undoing all the of socialist policies of his predecessor and changing Washington as only a great leader who understands business over politics could.  But 40% of Americans will never hear him because they listen to propaganda media that twists his words and tells them how to interpret what he says and does as being evil, chaotic, and destructive.

Democrats are once again hoping they can appeal to the young and ignorant voters by pretending to be conservatives on campaign and slandering Republicans as being 19th century Southern Democrats.  They are hoping to sway the gullible into believing that they have turned away from their agenda of importing cheap labor to replace American workers and eliminating gun rights.  But once seated these pretenders will join with the leftist regime that wants to tax away American’s wealth and give rights to anti-American, non-citizen, deadbeat parasites, and has hopes of convincing fools to give up their self-defense.  Democrats keep saying America needs immigrants to keep the economy growing, which is not true.  They never address illegal immigrants who are a drain on the economy, account for twice the percentage of violent criminals as citizens, and commit ten times the amount of crime as legal immigrants.  The lying leftists always portray illegals as “good and wonderful people willing to do the jobs Americans won’t do.”  This is so much twaddle.  They are not adding to America’s economy by taking the jobs Americans entering the workforce would do.  They are lowering wages, which is why Democrats import their cheap labor to illegally replace Americans.  They like imported illegals because they can pay them less and not have to pay taxes for them.  That’s how Democrats and RINOs get around the tax code they write and why they don’t want to correct the situation.  If Republicans instead of Democrats were profiting off of importing illegals as cheap labor and welfare voter slaves they would have already built a fortified border wall complete with machine gun emplacements!

Obama and Hillary can dupe the uninformed about Democrat’s history and policies, but they can’t fool everyone.  For the majority of women to believe Hillary is a champion of women’s rights after she laughed about getting a rapist acquitted and assisted her husband in destroying the women of his adulteries is dysfunctional liberal thinking.  Girls may mature faster than boys, but women don’t mature as well as men and the proof is in the majority of women being so easily duped.  For Hillary to slander rational thinking Republican women as being men’s slaves is a galactic joke.  Obama’s support of Islam that requires women to wear a slave garment on their heads and endorses Sharia law that dominates women is proof that the Left is the ideology of men’s tyranny over women.  When they say, “Behind every great man is a great woman,” just look at Mt. Rushmore, Ronald Reagan, and now Donald Trump and you see these great men and their wives who are likewise great, rational thinking women.  Democrats slander Melania Trump, Anne Coulter, Laura Ingraham, Michelle Malkin, and Sarah Palin because they talk excellent good sense and put to shame Democrat nonsense.

Hillary slandered Republicans as making their women house slaves while NeverTrumpers slandered Republican voters as lemmings for supporting Trump.  Donald Trump is the ONLY Republicans who has actually instituted the very agenda that Republicans voters have been screaming at the GOP to do for the past twenty years!  These frauds endorse Obama who praised Farrakhan, a supremely bigoted, anti-Christian racist who has spoken long and loud against white Christian men, Jews, and women!  Sharia law makes women slaves, yet the Left approves of Islamists Feminazi advocate Linda Sarsour chastising infidels that Moslems consider lower than women while wearing the Moslem slave woman head garment known as the hijab.  In Islam Imams are the elites, Muslim men the first-class citizens, non-Arab Muslim men are second class citizens, women are third class citizens, and infidels are dhimmis which are just above the lowest class that consists of slaves and whores, which is how they perceive western women.  This is what the Left approves of above Christianity that teaches that all people are created equal in the Eyes of the Lord. 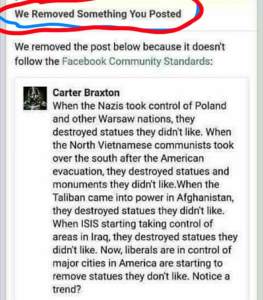 Despite Donald Trump’s masterful manipulation of the media and superb leadership in achieving most of his agenda in his first year there are many who still believe the Democrat propaganda against him.  Democrats and their Republican establishment cohorts, like John McCain and Jeff Flake, are working feverishly to take down Trump before he proves to too many people the truth – that what Republicans and Democrats have been doing in working together has all been to the detriment of the country.  The nation has gone to the left of center despite Eisenhower’s and Reagan’s best efforts to turn the nation around.  Donald Trump now represents the last best hope of turning America from the brink of becoming a totalitarian socialist state.  But the Democrat voter fraud machine and their NeverTrumper traitorous ally’s posing as conservatives are still very much in play.  In this author’s opinion he must force Congress to pass a voter ID law that requires picture proof of identity and thumbprint signature of ballots in order to stop the Democrats from stuffing the ballot box.  This would negate upwards of ten million fraudulent votes that the establishment keeps insisting don’t exist, but every time a recount is made as it was in Detroit in 2016 by an independent, thousands of fraudulent votes are found in each district and they are virtually all for Democrats.  With states and crooked Democrat pollsters giving voting rights to foreigners in the country illegally there is no chance for honest elections in this country until that practice is crushed and its advocates imprisoned for treason.

[Author’s Note:] Liberals try to create a narrative out of Trump unloading Tillerson that he did it via Twitter as proof his administration is in chaos.  These are just a couple more lies to add to the pile.  I have gotten so sick of hearing liberal media lies after having disproved almost 100% of what they say as frauds, that I don’t believe anything they say anymore.  Let the wolf eat the little bastards!  I had doubts about Tillerson from the start when I read that he didn’t recognize Islam as a major world threat.  Discovering he was undermining Trump’s efforts to undo Obama’s Iran deal wherein he gave his Moslem brothers a hundred billion dollars with which to build their nukes is reason enough to dump him!  The fact is that Donald Trump couldn’t go into the White House with a completely ready-made administration, so it’s understandable he would get some people who were not on his side.  There are still NeverTrumpers who would rather have Hillary, and none of them truly represent Republican voters that have been begging to have someone like Trump to truly be on their side taking action against the Left’s tyrannical corruption.  The GOP in Congress failed conservative voters for the six years they were in power under Obama.  Jeb Bush tried to win the Republican primaries by drawing Democrats while dumping on conservative Republicans and look what that got him.  Democrats who are not leftist ideologues that had been duped by Obamaism came back to the Reaganism that The Donald has recreated as Trumpism.  They are being rewarded with seeing America become great again, the economy grow in opposition to what Obama claimed was the “new normal,” yet for which he wants to be given credit, and that would have remained stagnant under Hillary.  Donald Trump has breathed new life back into the American Dream, and Democrats, who advocate for giving the country away to foreigners who hate America, are resorting to every subterfuge to reclaim power, including selecting a turncoat Marine who joined their party to run on the Trump agenda.  This kind of foolishness is what intelligent Americans should not fall for, but many do.  Add a few votes to the Democrat fraud machine and it’s an even contest where Trump had won by twenty points.  Perhaps this is nothing more than a worthless special election for a district that is not going to be there next year, but it still bodes ill for the increase in Democrat voter fraud and the decrease in people’s intelligence to believe in Democrats again.  I mean, come on!  How many times have they said they have “evidence” of Trump colluding with Russia to steal the election, but they won’t reveal a shred of it?  “I have the proof in this box, but you can’t look in it, you just have to believe in it and trust me.”  Quit hitting yourself!

Liberal’s mistakes of the past week alone

Democrats are doing everything they can to fool the gullible

America’s Immigration System is NOT Broken – Democrats Are!

California Democrats Ready to War Again to Keep Their Slaves

This site is my opinion only and is unpaid. I am a retired Paramedic/Firefighter with 25 years of service in the City of Dallas Fire Dept. I have a B.A. degree in Journalism, and A.A. degrees in Military Science and History. I have spent my life studying military history, world history, American history, science, current events, and politics making me a qualified PhD, Senior Fellow of the Limbaugh Institute, and tenured Professor Emeritus for Advanced Conservative Studies. 😄 It is my hope that readers can gain some knowledge and wisdom from my articles.
View all posts by dustyk103 →
This entry was posted in Politics and tagged America, American Dream, Democrats Import Illegals, Donald Trump, Economy, Leftist propaganda, Liberal Fascism, Progressive Socialism. Bookmark the permalink.