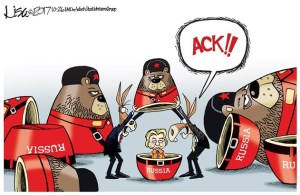 Leftists wish this would be true.  The revelations over the last week exposed to the general public proved that the Russian collusion is a fraud, but that Hillary and Obama are guilty.  If Mueller issues an indictment against any Republican, rather than against Hillary and her Democrat stooges who have perpetrated this farce, then he is betraying the people.  This would be the creation of a years long distraction to provide cover for Democrat’s crimes.  The slandering of Trump by the Hillary campaign, the traitorous sale of American uranium to Russia to sell to Iran by the former president and his secretary of state, and the spying on Trump and his campaign by the Obama administration are the only crimes that have been revealed by this investigation.  The infamous dossier for which Trump was investigated has been proven to be a fraudulent document, not “opposition research.”  The Russian to whom Don, Jr. spoke was a nothing burger.  Manafort, whose home was raided by S.W.A.T. in an attempt to intimidate him to admit to any crime by which Democrats could charge Trump, has been victimized by the Democrat Nazi state.  Mueller, digging years back into Trump’s business past in an illegal witch hunt for some crime by which to impeach Trump, violated his 4th Amendment rights utterly.  He has been attempting to force a Process crime, (which is a charge akin to Nixon destroying Oval Office recordings to avoid discovery rather than the crime itself for which he was investigated), to be committed by those he has been investigating by violating their rights.  Whoever Mueller indicts, if it is not a Democrat, is proof that his entire investigation is nothing but a corrupt endeavor by Democrats to create a smoke screen to distract from their guilt.  On that basis Trump should discharge him, his team, and Rosenstein, and AG Sessions should come out of his cloister to bring them all under investigation as he proceeds to investigate and bring charges against Hillary and Obama.

Everything Democrats Accused Trump of with Russians… is what Democrats were Doing!

Rush Limbaugh: “…when Democrats start leveling charges, by the time you get to the end of the trail on it, you find out it is they, the Democrats, who’ve actually been doing the very thing that they are accusing Republican opponents of doing.”

Obama exposed in collusion with media to cover-up crimes

This site is my opinion only and is unpaid. I am a retired Paramedic/Firefighter with 25 years of service in the City of Dallas Fire Dept. I have a B.A. degree in Journalism, and A.A. degrees in Military Science and History. I have spent my life studying military history, world history, American history, science, current events, and politics making me a qualified PhD, Senior Fellow of the Limbaugh Institute, and tenured Professor for Advanced Conservative Studies. 😄 It is my hope that readers can gain some knowledge and wisdom from my articles.
View all posts by dustyk103 →
This entry was posted in Politics and tagged Barack Obama, Democrat fraud, Donald Trump, Donald Trump Jr., Hillary Clinton, Liberal lies, Mueller issuing indictments, Obama spying on Trump Campaign, Paul Manafort, Robert Mueller, Russia distraction, Russian Collusion, Russian election hack, Trump Indictment, Trump Russia Dossier. Bookmark the permalink.

2 Responses to Mueller to Indict Trump for Russian Collusion